45 Years Ago, NASA Took the First Image of Earth from the Moon 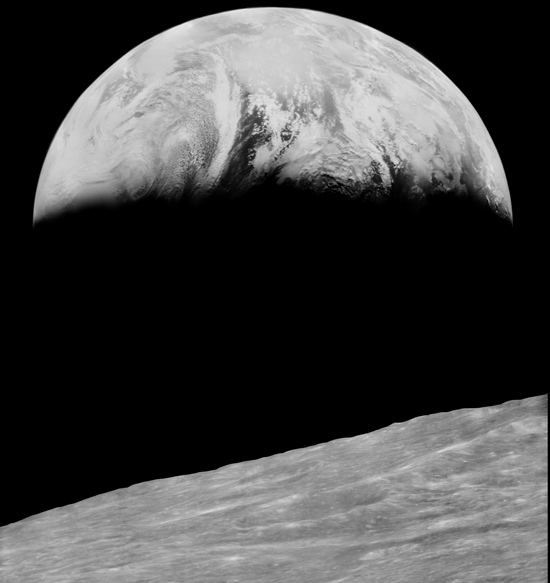 On August 23, 1966, NASA took the first image of the Earth from the Moon. While images of the Earth from space had been recorded since as early as the 1940s, this was the first time our world was shown in the context of another world. All this was a moving precursor to the Apollo 11 flight which three years later took humans to the surface of the Moon.

The image was taken from NASA’s Lunar Orbiter 1, a satellite the space agency was using to map the lunar surface. All this was in an effort to find a perfect landing spot for the upcoming Apollo missions, and was the first time our orbiting neighbor was fully mapped. During this survey, NASA decided to take the chance and point the orbiter’s camera back toward the earth and captured the stunning image you see above. This was a risky maneuver given the complexities of spaceflight, and was only attempted after higher-ups at the agency agreed not to blame anyone if it went horribly wrong.

Thankfully, the last-minute photo-op went off without a hitch, and the image was used by NASA as a poster to help promote the project. While taking a picture may not seem like a big deal, keep in mind that this was 1966 and the craft exposed, developed, scanned, and transmitted these images while exposed to the harsh environment of space. With all that in mind, and the successes and trials of the U.S. space program that would come after, the story behind the image may be as profound as the picture itself.

To see a full version of the first photo of the Earth from the moon, and to see a video about the Lunar Orbiter, read on below.

This was the image as it first appeared in 1966. The image at the top of the post, and the larger one below, are from after the image was reprocessed during the Lunar Orbiter Image Reprocessing Project.