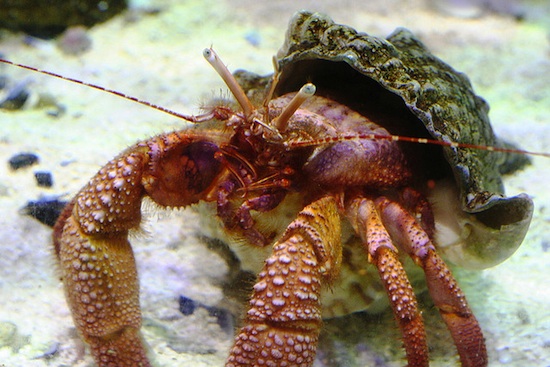 Life in the wilderness — be it tundra, forest or beach — is no bowl of cherries. Hermit crabs, though, make things extra tough on one another. Always on the lookout for a new home, smaller hermit crabs will form gangs to kick their larger kin out of the big comfy shells they’re residing in. Once they have, every smaller crab in the team moves up a shell size, leaving the once well-protected crab nothing but a walking tasty treat for a variety of predators.

The Straw Dogs style home invasion tactic has been observed in terrestrial hermit crabs, which makes sense, as the sorts of larger shells a crab can build a home and plan for a family in are plentiful in the ocean, but at a premium on dry land. Bigger shells are important because they let hermits grow into their larger abode and carry more eggs, increasing the chances that they’ll breed successfully. Taken together, these factors make for one of the most cutthroat real estate markets on the planet.

Rather than look for a big shell that’s unoccupied, smaller hermits take a more bullying track — look for another crab wearing a big shell already, and then take his. To do that, though, the hermits need to do something very un-hermit-like and assemble a posse. That posse then forms a congo line, from largest to smallest crabs, which works as one unit, eventually tugging the largest crab out of its shell. Once the largest shell is open, its a free for all, with every crab scrambling to get into the largest shell available to them while leaving the unsuspecting crab that’s just been evicted out in the cold, an easy meal for anything that eats hermit crabs on a beach where things that eat hermit crabs are pretty much the rule.

The research is surprising for a couple of reasons. First, it’s an odd case of a notably solitary creature — you don’t get “hermit” in your name by being gregarious, after all — evolving a social means of dealing with a problem. Even weirder, it’s a social activity that actually drives up predation in a species, which is almost unheard of. Finally, it’s evidence that some animals, like some people, are just plain jerks.