Here’s All The Hobbit Stuff We Didn’t Post Yesterday

We’ve been restraining ourselves from posting too much stuff about The Hobbit because, lets face it, this is not a LotR only blog and we would be straining at least a few people’s patience. So here’s all The Hobbit stuff from yesterday that we didn’t post because we’d already done like two posts related to The Hobbit and dangit, The Hobbit people calm down with your premiere pictures, unreleased photos, funny quotes, new behind the scenes footage, and Colbert Report interviews.

New behind the scenes footage:

Patrick Stewart, you are not in The Hobbit. Stop it. (More pictures of The Hobbit’s New York premiere here.) 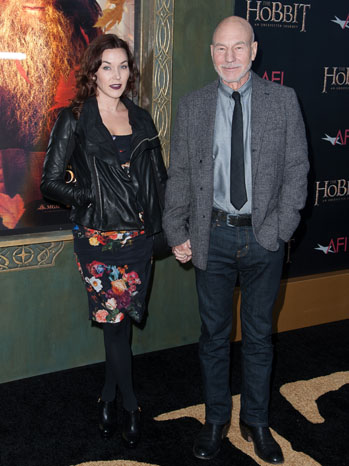 I would love to have seen the films Guillermo [Del Toro] would have made. It would have been amazing. And he certainly helped us by bringing fresh eyes to the Middle-earth because, of course, the biggest issue was making sure we weren’t remaking ‘Lord of the Rings.’ — Philippa Boyens, The Hobbit screenwriter, to The LA Times.

Here’s a new picture of the Great Goblin. I think photoshop may have been involved.

Andy Serkis was on the Colbert Report!

Martin [Freeman] was the only person that we wanted for that role, and that was really before we met Martin. We knew him from The Office and Hitchhiker’s Guide to the Galaxy, and we just felt he had qualities that would be perfect for Bilbo. The stuffy repressed English quality. He’s a dramatic actor, he’s not a comedian, but he has a talent for comedy… [When Sherlock‘s shooting schedule threatened to take Freeman out of The Hobbit] We were in trouble. I was really panicking. I was having sleepless nights. We were probably six weeks away from the beginning of the shoot, and we hadn’t settled on anyone else, and I was torturing myself by watching Sherlock on an iPad at 4 o’clock in the morning. — Peter Jackson, on casting Bilbo.

Peter Jackson was also on the Colbert Report