Relationship Goals: Why Star Wars Rebels’ Kanan and Hera Are the Best Couple in Sci Fi Because rom-coms seemed unrealistic, 14-year-old me took her romantic advice from science fiction movies and television.

I’m just going to let that sink in for a minute.

Star Wars topped the list. Leia gave me the idea that strong women just said no to everything, while cool guys pursued. Then came The X-Files, which managed to string Mulder and Scully along for seven seasons of unrealized sexual tension. Babylon 5, Farscape, Battlestar Galactica … pick a show; chances are it involves romantic leads taking several seasons to admit their feelings for each other. Angst is sexy. Tension keeps us watching. So while I internalized some definite (and questionable) ideas about how a couple gets together, I had very few models for the hard part—how a couple stays together.

That’s why you should probably watch Star Wars Rebels. Yeah, it’s a kid-oriented cartoon, but team leaders Hera Syndulla and Kanan Jarrus have garnered an awful lot of adult fans, too. Amidst the will-they-won’t-they angst that has become the norm in so many plots, they are quietly living out an established relationship with very little tension. They support each other, raise teenagers, get into arguments, and give ground, all without losing their individual identities. It is the most romantic thing on television.

At this point, those of you who have seen the show are saying, “Whoa, wait a minute. I thought the last season of Rebels confirmed that they were not, in fact, a couple? Didn’t Hera hold him at arm’s length because of her dedication to her work?” Women are too busy for relationships, right? That’s how this trope goes? 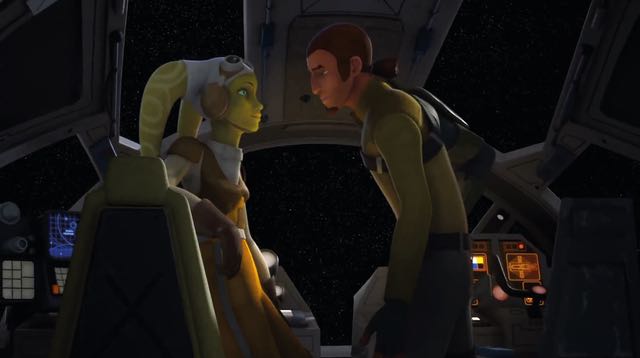 Are you sure they were a couple all along? 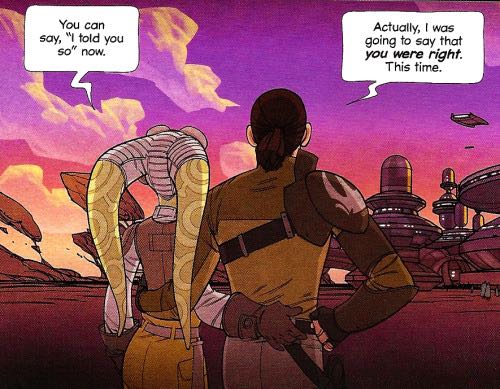 Are you really sure? 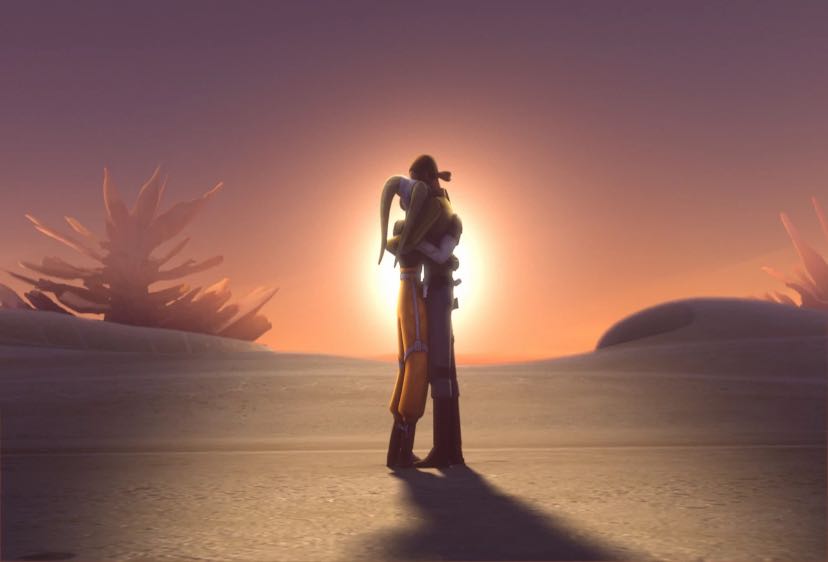 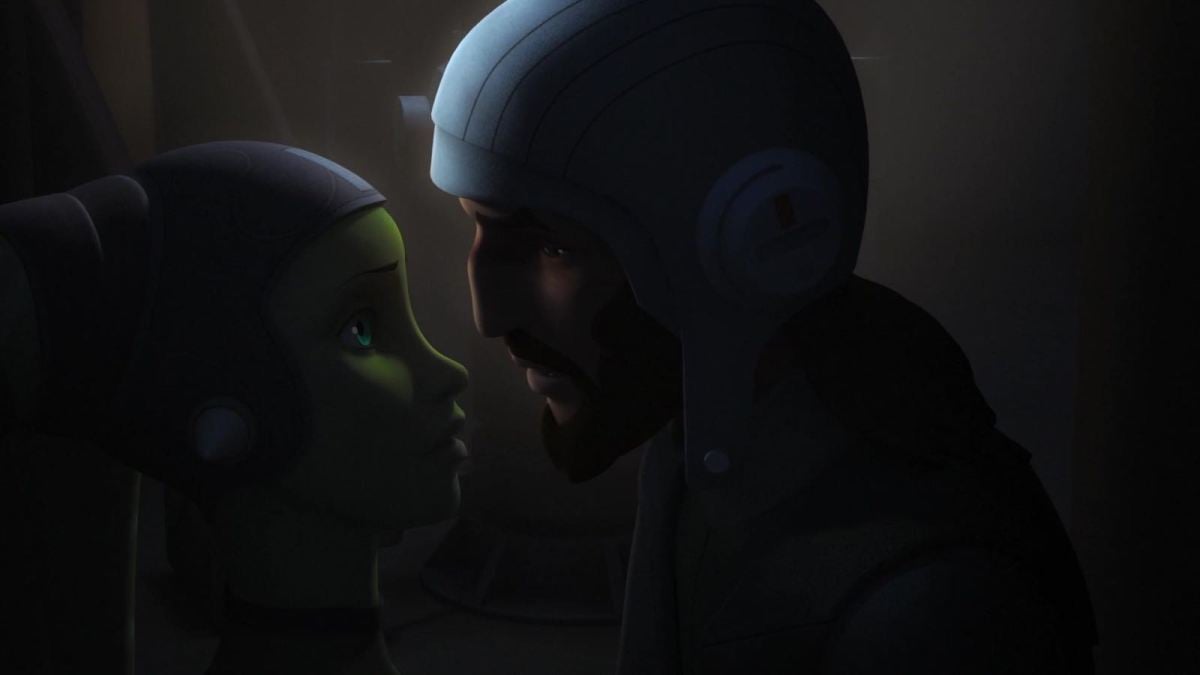 Good. Now that we have established them as a romantic couple, we can talk about why they are so darn functional. By the time Rebels ends in its fourth season, Hera and Kanan have lived and worked together for ten years—a solid decade and, considering that they were 18 and 22 when they met, their entire adult lives. They’re past the tension and the defensiveness, and while no couple resolves every disagreement, these two never fight for more than five minutes before one of them breaks down and explains what’s going on, and the other listens and offers sympathy, and poof—that’s it. They’re on the same team again. At no point in the series do we worry that their relationship is not going to make it.

That’s not to say that they’re perfect, because perfect is both unhelpful and boring. They bicker hilariously. (“I knew there had to be some way this was my fault.” “And you were right, dear.”) They mess up in some really rotten ways: at one point, Kanan manages to lose their droid—who is also Hera’s oldest friend—in a bet, and the ensuing argument goes about as badly as you’d expect. And they even have real disagreements, because they are different people with different goals. Hera fights against the Empire with single-minded dedication, which means that she becomes increasingly enmeshed in the Rebellion as the series progresses. Kanan, a Jedi padawan who barely survived Order 66 when the clones turned on him and his master, battles PTSD that the Rebellion’s military setting constantly triggers. You can imagine what it looks like when they stop operating as an individual crew and join the Rebel Alliance proper.

In fact, let’s stop and talk about this moment, because it illustrates so clearly why even their fights are pretty fantastic. At the beginning of season two, their team has just joined (and just learned of) the wider rebel movement. Kanan copes badly. He tells Hera he’s uncomfortable with this military operation and then acts out in little, inappropriate ways when she fails to listen. After a particularly nasty episode in the middle of a command briefing, Hera follows him and dresses him down for his behavior, and here we have a clear parallel to the Han and Leia fight on Hoth. See them? Both couples get so involved in their argument that blocking a hallway is no big deal. The thing is, these fights don’t end the same way. Han and Leia toss insults at each other and stomp off in frustration. Kanan yells back at Hera, but instead of accusing her, he more or less says, “I am upset because of my past, and I don’t trust these people!” Hera follows up with, “Talk to me.” And then 6’3” Kanan slouches against the wall so he won’t tower over her while they’re arguing. It’s beautiful. The scene concludes in a discussion rather than an argument, with Hera understanding and supporting Kanan while trying to talk him around. This particular conflict doesn’t end there, by any means. Hera won’t budge, and it takes Kanan time—most of the season—to come to terms with their involvement in starting a war, but from here on out, they’re working together rather than at odds. Also, they eventually have the decency to move out of the hallway. (Image: Disney/Lucasfilm)

This is the core of their relationship: they talk, and when one reveals a weakness, the other helps, rather than using it as ammunition. Hera gets why Kanan completely loses his cool in the next episode when his contacts for a particular mission turn out to be (surprise, Kanan!) clones like the ones who killed the Jedi. Kanan knows about Hera’s strained relationship with her father, a dynamic so messy that she apparently hasn’t spoken to him in years. No secrets from their past surprise each other. Over and over again, even in their first appearance, they compromise and advocate for the other person’s priorities. They also do this crazy thing where they apologize.

Oh, and they trust in each other’s competence. Hera is “the best pilot in the Outer Rim,” according to Kanan. He’s a Jedi and, if not untouchable, then at least capable of superhuman feats. Remember all those shows where the guy yells at the girl for having the audacity to put herself in danger? Yeah, none of that here. Hera’s in a firefight? Kanan says, “She was looking out for everyone long before you and I came along” and flies off on his own mission. Crash-landing a burning plane? “Don’t worry. She’s got it.” Kanan’s ready to fight when Lando Calrissian attempts to sell Hera as a slave, but all it takes is a tiny head-shake from her to make him back off and let her handle the situation. For her part, Hera has confidence in Kanan on any number of dangerous Jedi-related missions: he goes to a Jedi temple where he might be trapped forever, he draws Sith opponents away from the rest of the team, he stays behind while she gets their people to safety, and each time she deals with it.

And because they believe in each other, instead of holding their partner back, they encourage the other person to be better. It’s Hera’s idea to bring teenage Ezra Bridger aboard the ship, Hera who encourages Kanan to train him despite Kanan’s own self-doubts. Kanan surmounts his very real terror at the prospect of becoming involved in a war to advocate for Hera’s promotion to squadron leader—because she wants this, and because he knows she’d be fantastic at it.

1200 words in, I think it’s only fair to tell you that Star Wars Rebels is not really about romance. Creator Dave Filoni has repeatedly stated that, while these two love each other, their relationship remains “something that is there and unspoken” throughout most of the series. Instead, the show focuses on parenting teenagers compassionately so that they can become their best selves and on standing up to impossibly powerful tyranny because sitting down while other people get hurt is intolerable. They have too much to do for the romance to be foregrounded. I like that. Good relationships aren’t about sitting around, gazing into the other person’s eyes while they talk about “us” ad nauseam. Good relationships happen when a couple works as a team and each supports the other person’s efforts to make the galaxy better.

And this is why my favorite moment in Rebels doesn’t even involve these two together, although their history is written all over it. During one episode in the first season, we see Kanan’s padawan, Ezra Bridger, struggle to keep his cool. He’s remembering his parents’ disappearance, he’s having a rotten birthday, he’s messing up his training, and he’s giving Kanan some pretty serious backtalk—and he refuses to discuss any of this. Kanan tells him, “You’re not alone … but to discover that, you have to let your guard down. You have to be willing to attach to others.” If you’re a fan of the Jedi, this probably sets off all sorts of warning bells. One of the tenets of the Jedi Code is “no attachments.”

That rule gave Anakin Skywalker fits, created Darth Vader, and more or less allowed the galaxy to fall into fascism in the original trilogy. Back then, when Anakin shared his fears with Yoda, Yoda responded with the equivalent of “just don’t get attached, and then you won’t have to worry about it.” Stay out of relationships, kid. Yeah, good luck with that. Kanan, on the other hand, has made it where he is because he realizes that attachments help you be a better person, as long as you don’t get selfish about them. When Hera and Kanan meet (in the novel A New Dawn), he is an alcoholic commitment-phobe who leaves any planet where he starts to have friends. Before the end of the book, he’s offering to help her bamboozle stormtroopers and following her into Imperial operations.

It would be a disservice to suggest that Kanan fights the good fight purely because he falls in love with Hera; they don’t operate from that kind of co-dependence. But he finds the motivation to risk himself for other people because Hera points it out to him. And while they don’t fix each other—Kanan still has major issues with what happened to him as a child, and Hera still throws herself into the fight at the expense of her personal life—each helps the other person see that you function because of your ties to the people around you, not despite them. Their relationship is not the focus of the show; it’s the foundation, the other person’s commitment a constant background to their every heroic act.

I won’t spoil the end of the series for you, except to tell you that some awful things happen to the characters, and it’s mostly okay.

The best relationships are secure enough to risk everything.

Christina Potter Swan lives in Austin, Texas. When she’s not geeking out about Star Wars, she teaches English at the Liberal Arts and Science Academy and does an okay job keeping her own family in the air. You can find her science fiction class blog here.