Sperm Are Perfect and One Day They May Save Your Life, Say Creators of Spermbots

Sperm brought you into this world, and sperm will keep you here. 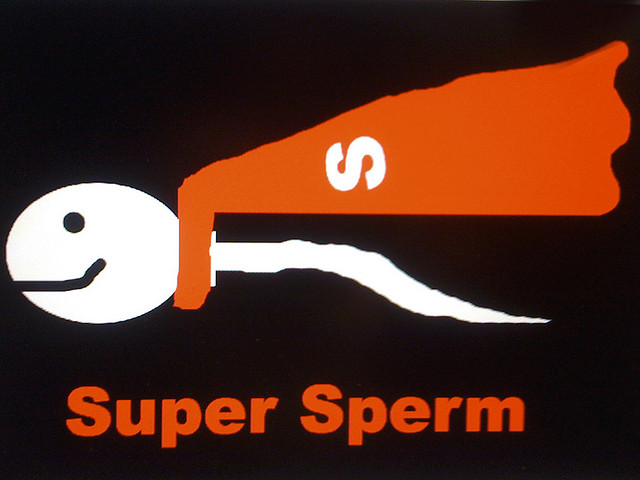 Though we may sometimes curse the speed of sperm (sorry Mom, Dad), tiny bio-bots that mimic the flagellar movement of natures’ lil’ swimmers and are powered by the contractions of heart cells may be the next step in fighting cancer and other common illnesses. In other words, when our heart and sperm work together as one, we will be unstoppable.

Researchers from The University of Illinois and Arizona State University described their creations in a news release last Friday, saying that the two-millimeter long bots harness the “corkscrew” like movements of sperm and the contractual motions of a beating heart to travel independently throughout the body.

The heart cells are grown where the tail meets the head in the polymer bots, and when they beat create a ripple effect that causes the sperm-tail to propel forward at a rate of 5-10 micrometers per second. While impressive, the speed also serves as a reminder of how scary fast the real upstream swimmers are. Some sperm can move up to 97 micrometers per second, or more than 100 times their length.

Nonetheless, the spermbots are an undeniable cause for excitement, marking the first synthetic structures capable of self-propelling through a biological environment like the human body.

“Micro-organisms have a whole world that we only glimpse through the microscope,” says Taher Saif, one of the creators of the study. “This is the first time that an engineered system has reached this underworld.”

It is, however, not the first time that Saif and his team recognized the contractual power of heart cells to propel a synthetic body. Check out the video of this determined little guy that they engineered in 2012.

Now that the team has successfully harnessed the power of heartbeats for their bots, the “long term vision is simple,” explains Saif. “Could we make elementary structures and seed them with stem cells that would differentiate into smart structures to deliver drugs, perform minimally invasive surgery or target cancer?”

We’re still reeling from the incorporation of heart cells into synthetic polymer structures (how did we give robots hearts so casually? How can we fight them now when they have love, the greatest weapon of all?), but we’re definitely excited for the implications spermbots may have for healthcare.

In the meantime, if there’s anything we’ve learned from this, it’s wrap it up, people! Seriously. Sperm is apparently so fast that not even cutting-edge robots can catch up. Also, it’s 2014, where is our flying car? Maybe sperm and stem cell technology can be used for that one too? Just an idea.

(via IEEE Spectrum and Illinois News Bureau, image via Selbe B)