In The Future, Our Robot Butlers Might Have Hearts That Pump Urine

Well, no wonder they're going to inevitably rise up and revolt! 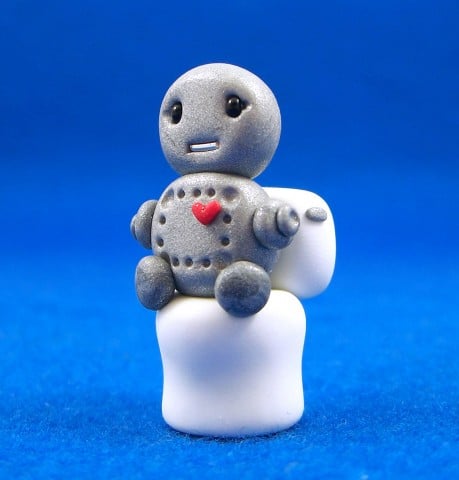 Today we learned two things: one, that scientists think that they might be able to channel the chemical properties of urine to conduct electricity, and two, that they’ve decided to test this out by building robot hearts that pump pee. We’re pretty sure that this isn’t what The Jetsons had in mind, but we’re intrigued nonetheless.

Gizmodo explained the science behind the idea back in 2010:

[W]aste water naturally contains bacteria and organic matter. When bacteria “consume” this food, they produce electrons that would normally combine with oxygen. But if kept in an oxygen-free chamber they can feed those electrons to an electrode and from there into an external circuit. Protons, meanwhile, pass through a membrane that divides the cell, to reach another electrode – the cathode – where they combine with the incoming electrons from the external circuit, and oxygen, to form pure water.

So a robot that would be able to pump the urine into a fuel cell like this would basically be able to power itself using the electrons that it harvests from the waste — much like the heart pumps oxygen-rich blood all throughout the body.

This is what researchers at the University of Bristol in the U.K. had in mind when they created this 3D printed valve, which pumps every 3.5 seconds for about 30 seconds, and then rests for three hour intervals.  Thanks to the magic of television, you can even see the robot pumping urine in action. Right now now it sort of looks like it’s… well, peeing into a cup.

Visit NBCNews.com for breaking news, world news, and news about the economy

This will no doubt come in handy when we have to test our robots for performance enhancing drugs.

So if this becomes reality, then what’s next for humanity? Sure, the process will probably only be used in robots that perform low-energy tasks like environment sensors, but what happens if we have so many of those that we don’t know how to power them all with the urine we have available? We can only imagine a world where pee is a kind of precious resource that corporations exploit lower classes to get, like some sort of horrific dystopia — wait, okay, that might just be the plot of Urinetown that we’re misremembering over here. Still.

(via Gizmodo and NBC News, image via Jenn and Tony Bot)