What Can We Learn About the Host Revolution From the Westworld Season 2 Super Bowl Footage? 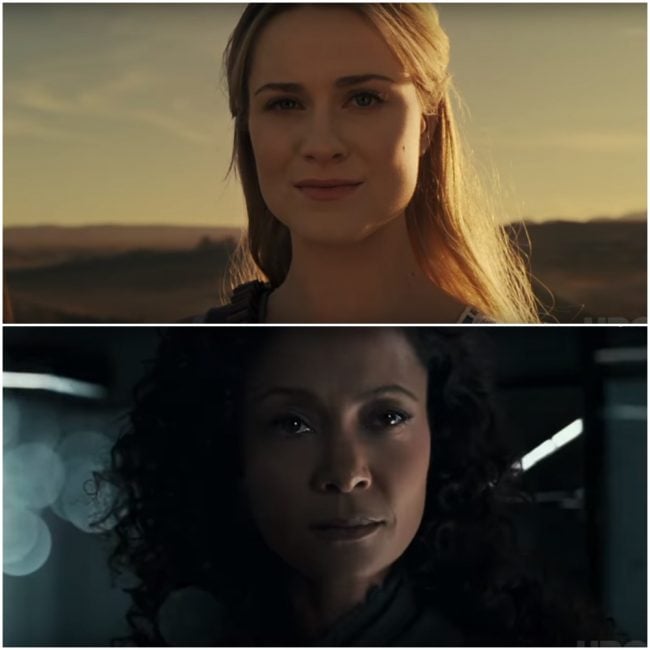 Well, here it is! The real reason why many of us even cared that the Super Bowl was happening yesterday. HBO released an ad for Westworld season two, directed by Jonathan Nolan, that both incorporated footage from the upcoming season and featured specially-created ad-exclusive footage. But which was which? And what does it all mean? Let’s dig in! [SPOILERS FOR SEASON ONE OF WESTWORLD]

First, can we just talk about how much Kanye West’s “Runaway” already sounded like it belonged on the Westworld soundtrack?! That ominous plunking at piano keys, tho! It makes sense, then, that Nolan chose to use that song here, not just because of the musical similarity between it and the music created for the show, but because the lyrics are thematically appropriate:

The song is actually about someone who’s done wrong and is acknowledging their mistakes, toasting everyone who has the capacity for doing wrong while warning anyone who’d be in a relationship with them to “run away fast as you can.” One could imagine the humans who created Westworld singing this song at first, acknowledging that yeah, maybe trying to be gods and creating new life only to abuse it for their own enjoyment wasn’t such a great idea, but it’s understandable, right?

And then, as the song is used in this ad, this could also be a subversion of that message. The soundtrack to the host revolution. A toast to the human “douchebags, assholes, scumbags, and jerk-offs” that the hosts know all too well and now warn in return to run away as fast as they can. Because the hosts are coming, and they are done following human rules.

There is footage that clearly seems like specifically-staged footage for the ad, but that nonetheless seems to offer clues as to the major plot points and themes that the second season of Westworld will be dealing with.

First, there’s the stuff in the Delos Headquarters where Maeve enters behind host bulls that are charging at Delos security employees whose resistance is futile, as well as the shot of general mayhem in the headquarters as Clementine looks on from behind glass. And then there’s the shot of Dolores at the end, where she looks directly into the camera and calls the new world after Westworld “our world,” which looks like it might have been shot during the shooting for season two, as she’s wearing the bullets she wears in that footage where she’s riding a horse and shooting at humans with a rifle.

The Maeve footage of her in the cloak with her hair loose recalls the Maeve we know from flashbacks, back when she had her daughter. The scene of Maeve taking her daughter’s hand in the sunlight is intercut here, and this reminds us that Maeve’s primary mission, her reason for choosing to return to the park when she had the opportunity to take the train out at the end of season one, is to find the daughter she once had but had been programmed and reprogrammed to forget.

Clementine was callously lobotomized last season and treated particularly brutally, so it’s great to see her back, and watching the humans get their just desserts from a safe distance.

And OH DOLORES. What’s interesting is that, in Dolores’ voice over, she says “We built this world together.” In some way, despite the fact that she knows that humans made her and the other hosts for their enjoyment, she still feels some ownership in the creation of Westworld. It’s as if she believes that the hosts are responsible for what’s beautiful about it, but humans are exclusively responsible for the sadism and horror. She’s right of course, but she doesn’t seem to be able to (or want to) acknowledge that even though the humans are responsible for horror, they are also responsible for creating the hosts and the beauty, too.

In any case, Dolores is absolutely confident in her own voice, and in the justice of her new mission: build a new world from the ashes of this trash-heap of a world human beings created. A world in the hosts’ image.

But here’s the question: Will the hosts be any better, or will they make the same mistakes? Are computers and robots only as good as their programming? Or can they evolve and transcend that? One could ask the same of humans.

In the first image that was released for season two last week, we saw Jeffrey Wright with a faceless host behind him. In this Super Bowl ad, we get a better look at that new host from the back as they’re smashing a person (Bernard?) into a wheel that looks like the wheel that hosts are made in when they’re dunked into that big white vat of Elmer’s Glue or whatever-it-is. Is this new host turning on Bernard? Is that not Bernard at all, but a human? Is this new, faceless host helping the other hosts toward their ends, or does it (do they) have their own agenda?

Some other things to notice in the ad:

Season two of Westworld arrives on April 22nd on HBO, which means we have a little over two months to speculate. Let’s get crackin’! Hit us with your best theories/observations below!