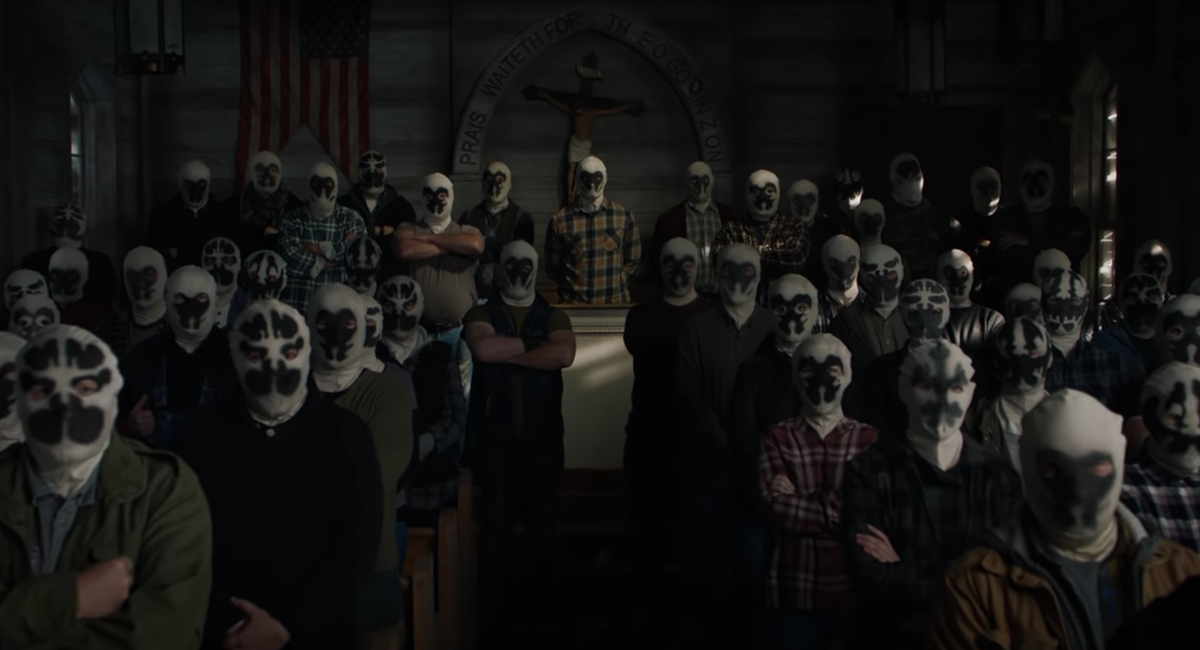 Tick tock goes the Doomsday clock. Fans of Alan Moore’s Watchmen look to be in for a treat as the latest teaser for the HBO’s reimagined show seems to tackle some of our darkest fears.

The trailer is haunting, especially in the use of Rorschach masks and the chanting of “tick tock” that grows to a fevered pace. The glimpses of Regina King and Jeremy Irons (who’ll play original Watchmen villain Ozymandias, though not necessarily how we’ve known him) that we get are excellent; I hope King goes for another Emmy with this role. And of course, it wouldn’t be Watchmen without reference to the end of the world, would it?

The idea of Rorschach not being one man but a militia is deeply horrifying, and a great way to update the character for the present day. Maybe it’s just the minority that I’ve seen, but there’s too much idolizing of Rorschach as a vigilante hero, rather than the deeply violent man he is. By making Rorschach more than just a lone wolf and framing him in the idea of being part of a militia, it actually makes him into someone we should be wary of, especially as this country wrestles with a lack of gun control and fears of uneasy transfers of power.

“We convinced ourselves that they were gone,” one character says towards the beginning of the trailer, “but they were just hibernating.” This show is a reimagining of Watchmen, so perhaps the “they” is referring to vigilante heroes? It certainly can’t be referring to Dr. Manhattan or the alien that destroyed New York, since this isn’t a direct sequel to the original.

We see King in a superhero outfit, so I’m guessing she’s a former superhero/vigilante who gets drawn back into the life, possibly after the death of her husband. What role Ozymandias will play in this story, I can’t guess: I assume that he won’t be the twist villain again, since we’ve already done that story.

Above all else, this seems like a re-capturing of the spirit of Watchmen, beyond the surface level interpretation. The original Watchmen was an examination of unchecked power and those who think they have the right to decide people’s lives. Rorschach was a violent man who assumed he had the right to exact justice. The Comedian was a representation of what a Captain America would look like in an un-idealized world. Dr. Manhattan saw himself beyond humanity. Ozymandias, the perfect specimen, massacred his way to world peace.

It’s hard to make a snap judgment of the show from a short teaser, but it already seems like it’s more focused on critique rather than glamorization. Zack Snyder’s film adaptation reproduced some of the graphic novel’s iconic panels exactly, but I’m glad we’re moving beyond the Watchmen that we all know. I’m glad that series creator Damon Lindelof seems to be more focused on the themes that made Watchmen a classic rather than the misinterpretation of the text that glorifies the violent white men in it. I cannot wait for the show, which could be the successor to Game of Thrones that HBO is probably hoping for.