The Haunting of Hill House is a Delicate, Intimate Portrait of Trauma 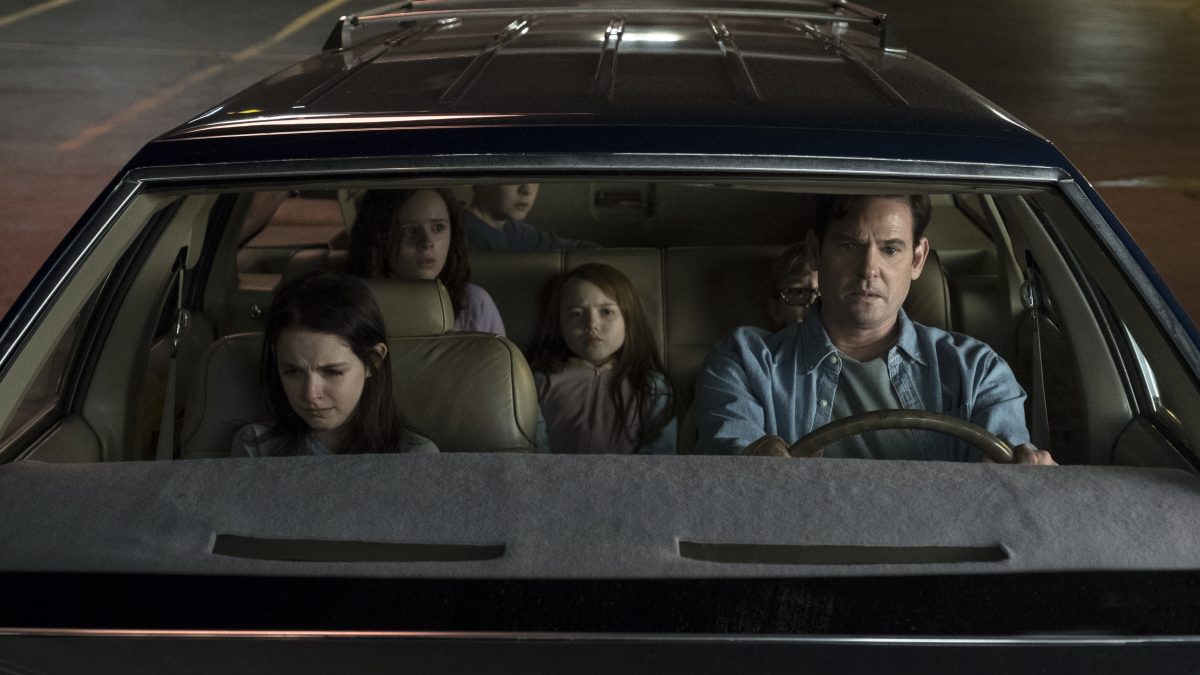 (Warning: massive spoilers follow for the entire season of The Haunting of Hill House.)

Episode six of Netflix’s masterpiece The Haunting of Hill House is a triumph of television. The adult Crain siblings and their estranged father have gathered to mourn youngest daughter Nell, who died by apparent suicide. In four takes, the tension builds as the family fights, trying to cast blame and find meaning in their loss. We transition between the present day and 1992, where the family is gathered in the titular house during a storm and frights ensue. There are visual shocks and spooky apparitions, but the most frightening moment is the family’s present day anger, and the tension only breaks when eldest son Steve finally says the words he’s always wanted to say to his father, Hugh. Our building dread is not entirely centered around the supernatural, but rather the words that Steve will never be able to take back.

Trauma and mental health are tricky subjects to portray in film and television. Writers either don’t want to explore the uglier sides of it, or want to drive home some sort of message. An argument could be made that series creator Mike Flanagan does want to drive home a saccharine message with the final episode, “Silence Lay Steadily.” But for me, that ending worked on a profound level, because it gave the catharsis the characters so richly deserved, even if it is something that those of us stuck in the real world will never get.

The Crain family is marked by trauma. The loss of matriarch Olivia in one fateful night at Hill House splits father Hugh from his children; a lack of understanding of what happened to them causes the children to react in different ways. Steve monetizes his pain through writing, Shirley “ices people out” as one character puts it, Theo builds walls around herself. The greatest pain is inflicted on twins Luke and Nell, who saw the evil the house caused first hand. Luke turns to drugs and addiction and Nell is isolated by her own mental health and a terrible tragedy. The kids are not alright.

Flanagan navigates the divide between male and female response to trauma in a beautifully painful way. As the male Crains push their feelings deep inside and push their family away, the women also internalize their pain in a different way. Theo uses her psychic gifts to help children in need. Shirley, a mortician, is motherly to those who come to her “on the worst day of their life.” Nell expresses shock when a sleep technician actually listens to what she’s saying and does not dismiss it.

Nell’s story hit painfully close to home for me. Tragedy has followed Nell since she was six years old. She asks for help, and when she does not get it she lashes out in hopes of getting attention. When no one responds, she goes to Hill House, the site of her trauma. There she is greeted by apparitions of her family, who tell her everything she has longed to hear, and dances with her departed husband, finally loved in the way she deserves to be. It ends in tragedy though, as most things do in Hill House, and her death rings backwards in time to show that her pain has been haunting her younger self all her life.

In the following episode, Nell disappears. The family searches for her futilely, and when she reappears she insists she’s been standing there the whole time, waving her arms and calling out to them. “Why didn’t you see me?” She asks, as the camera cuts to her adult body in her coffin. As someone who has felt at times like my mental illness has caused me to scream and not be heard, her words left me winded.

The Crain family trauma does not always manifest itself nicely. The characters behave badly. They lash out. They say and do things that are unforgivable. But we can empathize with them, if not their behavior, because we are privy to their most desperate moments and their deepest fears. When they do get some catharsis, it is well earned and well deserved, because these characters have been struggling for so long. We want them to find some moment of peace, even if it doesn’t solve all their problems.

The show wisely does not decide to try and answer all the mysteries it presents to the audience. Sometimes there are no easy answers, in life and in television. For Shirley, Theo, and Luke, there will never be answers for all their questions. They are granted a moment to connect with a ghostly Nell, who tells them what they want to hear and absolves them of guilt for her death; for those of us who have lost someone, it’s a wish fulfillment moment, more for the living than the dead.

Hill House in the end becomes a giant monument to the existence of trauma. It “digests” those inside it, tormenting them and, in Olivia’s case, driving them to do terrible things. Olivia is clearly suffering from some undiagnosed illness and the house preys on her fears for her children, making her do something unspeakable. Nell, unable to escape from her pain, returns to the very source to seek absolution. Hugh remains there with his wife and his daughter, but not after passing along their great secret to Steve.

See, Hugh made a deal with the Dudleys, who are the caretakers of the home. After Olivia poisons their daughter Abigail, Abigail returns as a ghost to walk the halls of the house. The Dudleys vow to keep the secret of Olivia’s last horrible act to themselves if Hugh will let the house stand and starve, never allowing another soul to enter. They, much like Hugh, can’t let go of their past. They have just learned to live with it.

Steve becomes the caretaker of the family and their trauma. Through a montage, we see that he reconciles with his wife, that Shirley confesses her sins to her husband, and that Theo finally lets people in. We are treated to a glimpse at their lives two years later; Luke is sober, Steve’s wife is pregnant, and everyone is happy. Across the country, Mr. Dudley brings his dying wife to the house, so her spirit can be reunited with her daughter. Steve’s voiceover mirrors the opening lines of the show as he speaks about love and sanity, and the last shot of house fades to black.

Is it a tidier ending than real life? It is, but that’s fiction for you. Is it unearned? Absolutely not. There’s a hope in the characters receiving the catharsis they need, because even though we see them survive and thrive, we know that their pain will never fully go away. It exists, both in their minds and in the physical form of Hill House. But they have learned to live with it, through their connections to each other.

There will be some who hate the ending for being overly saccharine. However, this is a ghost story, and ghost stories have concrete endings. I admire Flanagan’s decision to end the series on a powerful, hopeful note. It’s too easy to tell tales of trauma where the characters never are able to survive and heal. The decision to let his characters have happiness is powerful, because having characters who live and grow trumps leaving them to a tragic fate.

There will hopefully not be a season two, though Netflix might want that sweet, sweet money. If there is, please leave the Crains out of it. Let them move beyond their trauma instead of revisiting it over and over, because we all crave the ability to move on from our pasts. Give us this, at the very least.