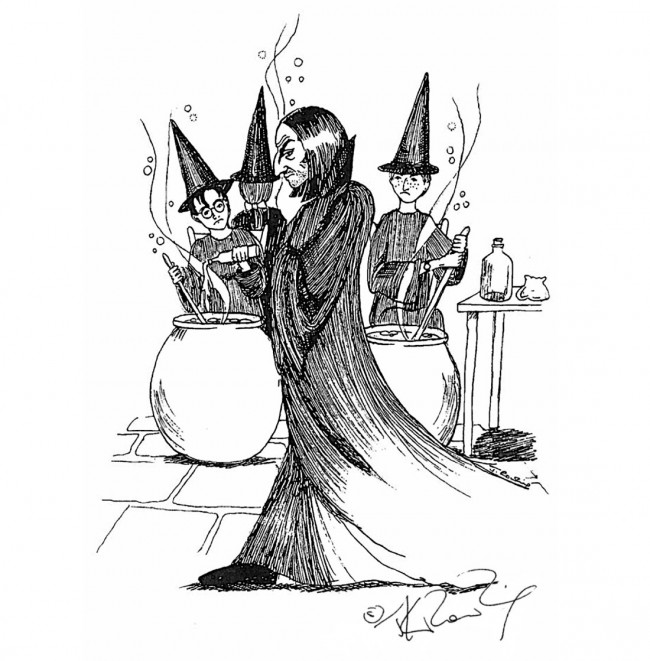 Did you know that J.K. Rowling has an impressive collection of sketches of her visions for her characters in Harry Potter and the Sorcerer’s Stone? (Or Philosopher’s Stone, depending on which edition you’ve got.)

For a long time now, Rowling has been quietly uploading various sketches and stories to Pottermore under the “Writing by J.K. Rowling” section of the website. All of the entries are undated, but this post entitled “Potions” about her original vision for Professor Snape, featuring an incredible sketch of the character, has been making the rounds on social media this week. It may not be a new post, but it’s only now getting discovered by fans and shared all over … perhaps because Snape is a super-popular character? Who knows?

The sketch of Snape has also motivated lots of Harry Potter fans to comb through the rest of Rowling’s posts on the site and find all of her sketches, each of which appears to date back to the Philosopher’s Stone period of time. There are eight sketches in all, and this Time article compiles all eight that have been uploaded to the site so far.

It’s incredibly fun to read through the descriptions of each of the characters–plus the drawings look fantastic, and most people (including yours truly) had no idea that Rowling had such a knack for drawing. Even though Harry Potter canon is “done” now–and that’s probably for the best, for any number of reasons–it’s still neat to see drawings that appear to have been created way back when the story was first coming together. Perhaps future editions of the first Harry Potter book will feature these illustrations.

(via Time, image via Pottermore)