This Is Your Brain On Hogwarts: Researchers Study How Reading Harry Potter Affects Neural Activity

Most Muggles only use 10% of their brain? 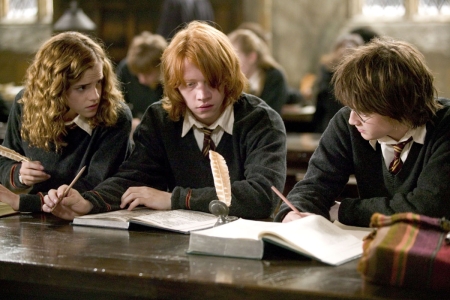 In research published last Wednesday in PLoS One, scientists from Carnegie Mellon University have revealed they can predict with an impressive 74% accuracy the neural pattern that will be produced by reading specific passages in Harry Potter and The Sorcerer’s Stone.

In order to better understand the multitasking activity occurring in the brain when reading fiction, the researchers recruited 8 adult volunteers willing to lie in an MRI machine for 45 minutes while “The Midnight Duel,” Chapter 9 of The Sorcerer’s Stone, flashed on a screen at a word-per-half-a-second rate. According to lead researcher Leila Wehbe, Chapter 9—which features Harry learning to fly, confronting Malfoy, and running into the three-headed-dog, was chosen specifically by the researchers because it has “plenty of action and emotion, but there’s not too much going on for scientists to track.”

Rather than just analyzing how the brain reacts to specific words or phrases, Wehbe and her team then painstakingly tracked the neural pattern produced second-by-second when reading small sections in the context of the larger story, eventually developing a computerized model to track the patterns of recurring activity in a healthy brain; for example, reading about Harry learning to fly activates the same region of the brain stimulated when we watch a person moving in real life. Similarly, as Tech Times points out, “understanding book characters activated a brain region associated with that we use for understanding people in the real world.”

In the future, this research could help readers struggling with dyslexia or recovering from a stroke. Explains Tom Mitchell, head of Machine Learning at the University:

[…] it turned out amazingly well and now we have these wonderful brain maps that describe where in the brain you’re thinking about a wide variety of things […] If I’m having trouble learning a new language, I may have a hard time figuring out exactly what I don’t get. When I can’t understand a sentence, I can’t articulate what it is I don’t understand. But a brain scan might show that the region of my brain responsible for grammar isn’t activating properly, or perhaps instead I’m not understanding the individual words.

Plenty of points to Carnegie Mellon! Now perhaps they could start researching where my Hogwarts letter went?

(Via JCOnline and Tech Times)

Previously in Harry for your Health