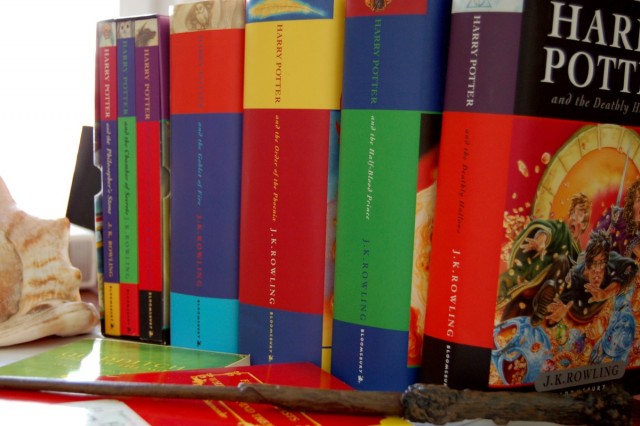 In case you somehow totally missed the boat on this whole Hogwarts thing, you should probably read Harry Potter. Not only because it’s a fantastic series that will make you happy forever, but also because—according to new studies—reading JK Rowling’s series will make you a better, kinder person.

Three new studies, conducted by by professor Loris Vezzali of the University of Modena and Reggio Emilia and published in the Journal of Applied Social Psychology, were performed to see how children and university students treat “out-groups” (a sciencey term for marginalized folks) before and after being exposed to Harry Potter. We already know that reading classic literary fiction helps you to understand what other people are thinking and feeling; turns out, according to the abstract, the Boy Who Lived also totally makes you hate people that aren’t like you way less:

We conducted three studies to test whether extended contact through reading the popular best-selling books of Harry Potter improves attitudes toward stigmatized groups (immigrants, homosexuals, refugees). Results from one experimental intervention with elementary school children and from two cross-sectional studies with high school and university students (in Italy and United Kingdom) supported our main hypothesis.

Scientific American helps break down the study. Basically, Vezzali and his team asked a bunch of Italian elementary school kids how they felt about a group frequently stigmatized in Italy: immigrants. Then, the kids were divided into two groups for six weeks, where they’d read passages from Harry Potter and talk them out with a Research Assistant. One group read neutral sections (I’m assuming this means anything involving Charms class), while the other read passages about prejudice (eg. “Filthy little Mudblood”). At the end of the six weeks, the kids who’d read the sections where Harry has to deal with bigots found that their attitudes towards marginalized groups had changed to become much more positive. Funny how that happens.

Vezzali’s team conducted similar studies with other age groups, while asking them about different marginalized groups; they asked high school students about their opinions on homosexuals and university students about how they feel towards refugees. As the focus groups got older, the researchers noticed they changed their attitudes less out of a feeling of identification with Harry and more because they super-mega did not want to say they identified with someone like Voldemort. I guess realizing that your beliefs kind of make you similar to Magic Hitler will have that effect on you.

The researchers believe that fantasy books in particular help kids and adults to deal with our prejudices because we’re confronting them in a way that’s parallel to real-world issues, and so avoids any defensiveness that might come up when discussing actual IRL marginalized groups. Realizing that it’s not cool to hate Muggles is a lot easier than confronting your own potential homophobia, but it’s nice to know that one actually does have a mitigating effect on the other. Vezzali said that, “Unfortunately the news we read on a daily basis tells us we have so much work to do! But based on our work, fantasy books such as Harry Potter may be of great help to educators and parents in teaching tolerance.”

Rowling obviously isn’t perfect in how she portrays marginalized or stigmatized groups in Harry Potter; after all, she essentially demonized the entirety of Slytherin house. But I will argue to my dying day that the Potter series teaches you all sorts of amazing things about friendship, family, responsibility, death, choices, and more. If reading her books makes just one kid a little less likely to spew anon hate at someone else for being just slightly different, then that’s great news.

(via io9, image via Alberto Alvarez-Perea)