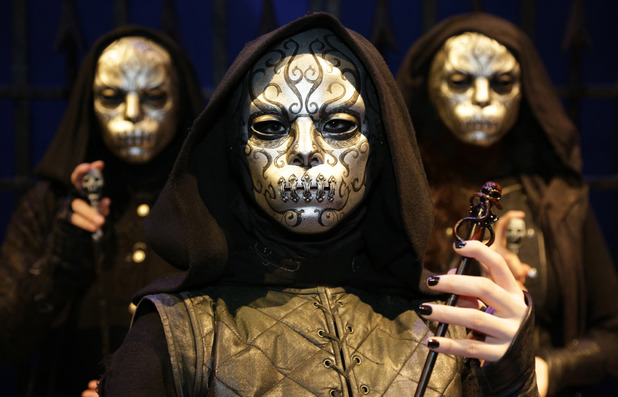 First the Wizarding World of Harry Potter adds Diagon Alley, now the Warner Bros. Studio Tour in London is adding a Dark Arts section. Everything is coming up Harry Potter attractions that I want to visit but can’t afford to. …Yay?

Instead of just the Malfoy Manor fireplace currently on display, visitors will be able to see the whole Malfoy Manor set, where Lord Voldypoo and his Death Eater minions got together for their potluck dinners. A life-size statue of Muggle Studios teacher Charity Burbage will be on display, as will a 20-FOOT-LONG NAGINI. Via the official press release:

Officially launching on Tuesday 14th October, the new section will also include a variety of never-before-seen artefacts and props from Borgin and Burkes, the Knockturn Alley shop Harry accidentally stumbles into in Harry Potter and Chamber of Secrets. Visitors will be able to see these weird and wonderful props up close, including the mysterious Hand of Glory, the Vanishing Cabinet and the sarcophagus that hid Harry during a deleted scene from the second film.

A section of Dolores Umbridge’s Ministry of Magic office, including her garish kitten plates, perfectly putrid pink costumes and desk, will be on show as well as Defence Against the Dark Arts professor Remus Lupin’s costumes, magical projector and gramophone.

You know, in case you want to bring along some Sirius Black paraphernalia and cry over their tragic love. What? What?!

The Dark Arts section will be on permanent display, with special events taking place from October 17th through November 3rd. You can find out more about the Studio Tour and buy tickets on the official website. ROAD TRIP!

I wanted to use a still of Voldemort awkwardly hugging Draco for the top pic, but those are remarkably difficult to find in even halfway decent quality (you let me down, Internet), so you get this instead: