Yes you can put gyroids in your vacation home (eventually) 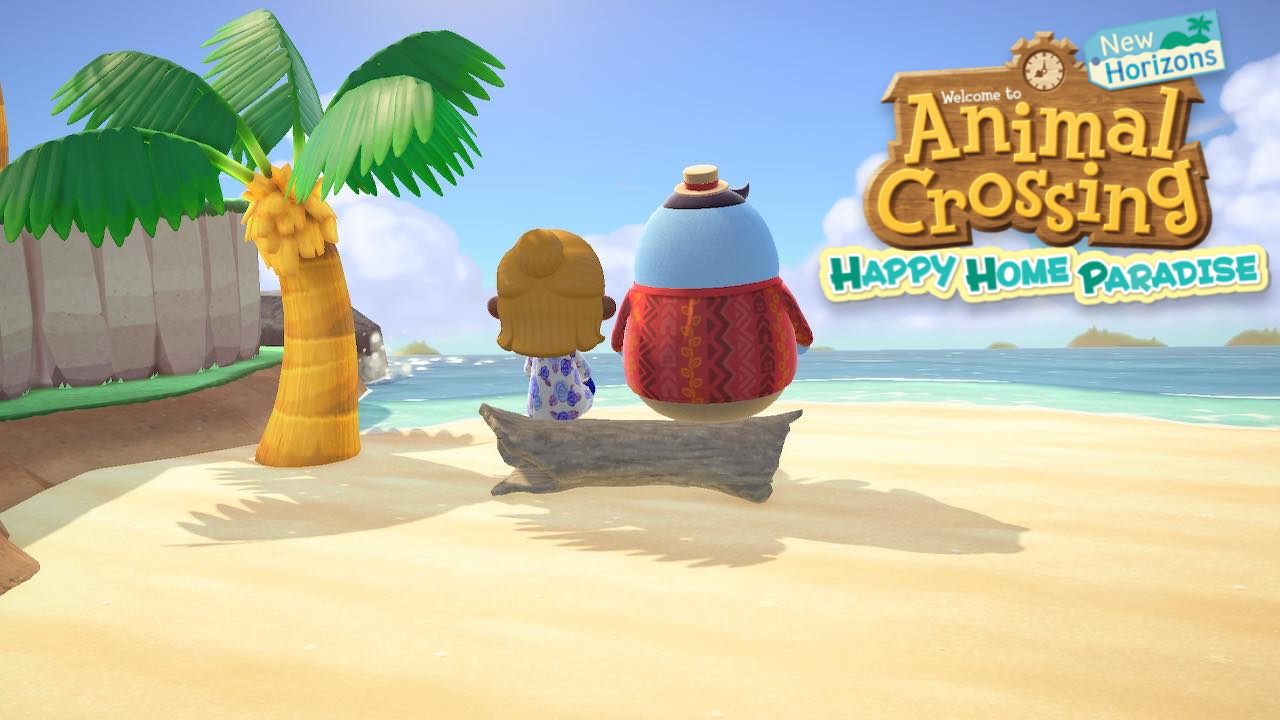 Yesterday, I reached the “end” of the Happy Home Paradise DLC for Animal Crossing: New Horizons. It’s not really an ending, though, because there is plenty to do after you make the last facility that Lottie wants you to make before the big music festival. Think of it as that moment in the game where your island got 3-stars for the first time and K.K. Slider showed up, the credits rolling to celebrate your achievement, but the game was far from finished (unless if you wanted it to be, I suppose).

Once you make 30 vacation homes and the final facility, you have a party on the beach that is, admittedly, a lot of fun to watch. And the music? Yeah, K.K. did the damn thing last night.

I love this so much omg!!! #AnimalCrossing #ACNH #NintendoSwitch pic.twitter.com/0Iar8aNNQD

Now that I’ve hit that point in my game, I thought I would make a list of some things I discovered while playing that I thought were pretty neat. I’ll also talk about what’s happened, so far, after I got the resort ready for that festival.

Check the beach for recipes

This might sound like a no-brainer as recipes wash up on our own islands on a daily basis, but I was surprised to find a bottle washed up on my beach resort. While I have gotten some duplicates, I’ve gotten a lot of great, new recipes, particularly for vines and glowing moss, which you can use to make furniture, walls, and even clothing.

Yes, you can pick the vines and glowing moss on the island

Again, probably another no-brainer, but when I initially got to the island I didn’t think you could touch the vines and glowing moss. I also didn’t think I’d be able to take it. But you can, and it will grow back later so you can pick more of it.

And yes, those ruined pillars you see at the top of the island? That’s a DIY you can get.

Be sure to revisit the facilities you made 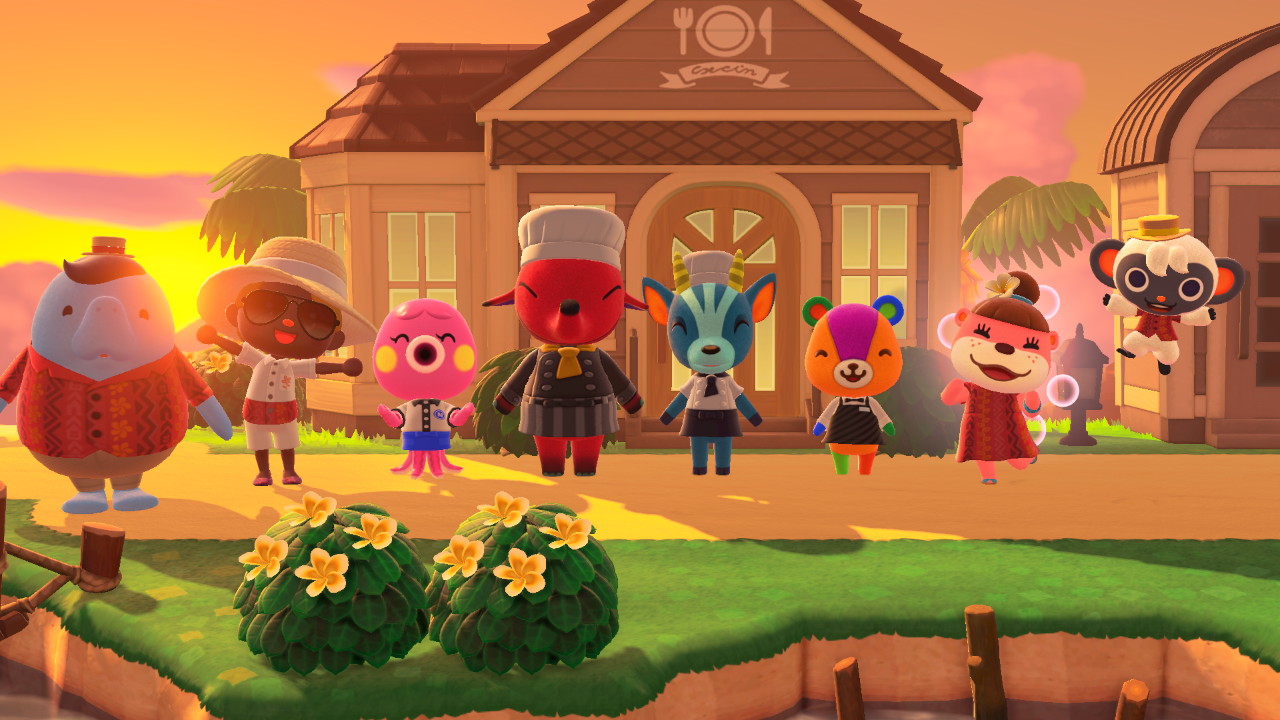 As you play the DLC you’ll be tasked with making different facilities. This includes a school, a restaurant, a cafe, a hospital, and an apparel shop. Much like the vacationers you build homes for, you’re encouraged to revisit these places when you get a chance.

Now I already knew to revisit my new homeowners because they give you an item as a token of appreciation for your hard work. However, I didn’t realize that I could go to my restaurant’s kitchen, talk to the chef, and learn a new food recipe! He does this every day I visit him, and with food recipes being new to the game, there is a lot I still have to get.

So yeah, be sure to go to your facilities when you go to work. They’ll be open when you get there (I’ve gone as early as 6:30 in the morning with no problem).

Remember what I said about revisiting facilities? Check your restaurant and cafe, as there will be new patrons there you can discuss vacation homes with.

Partition walls mimic the main wall, not the accent wall

This can allow for some fun ways to make a room look different from the rest of the house. For example, this is the Classic-Library Wall made with partitions, and behind it is the Ivy Wall. 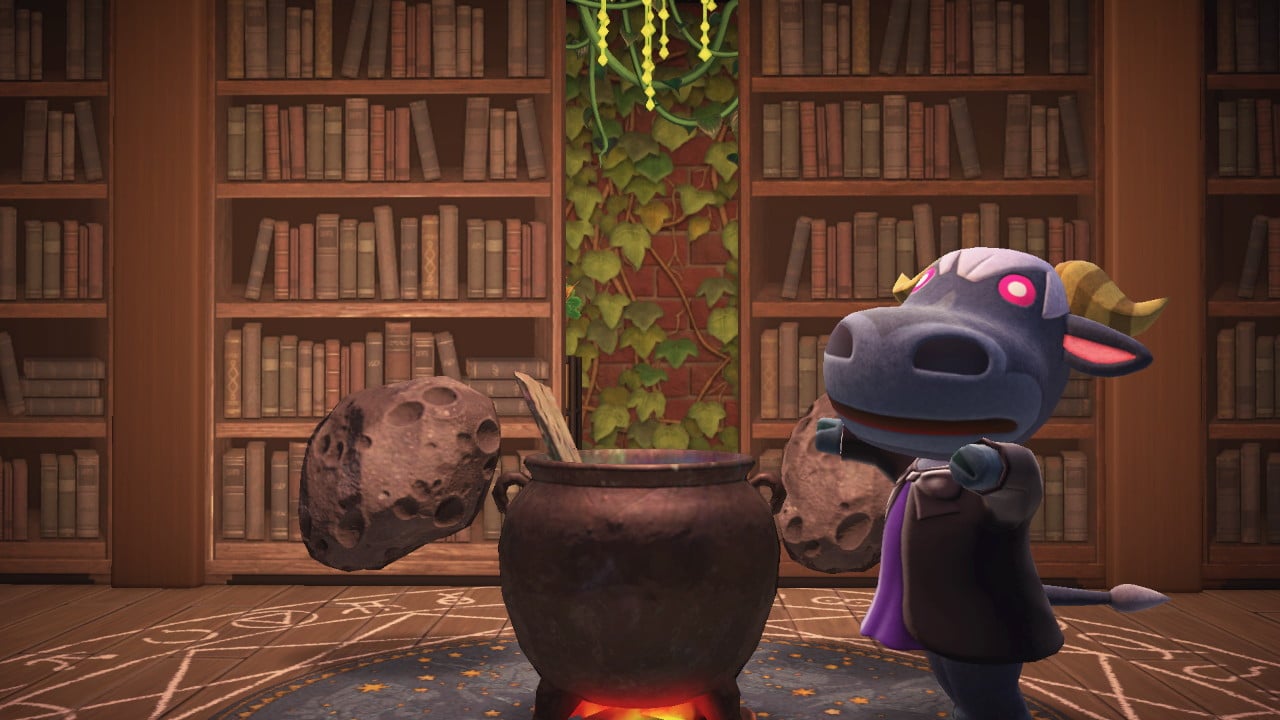 I did something similar for this office here: 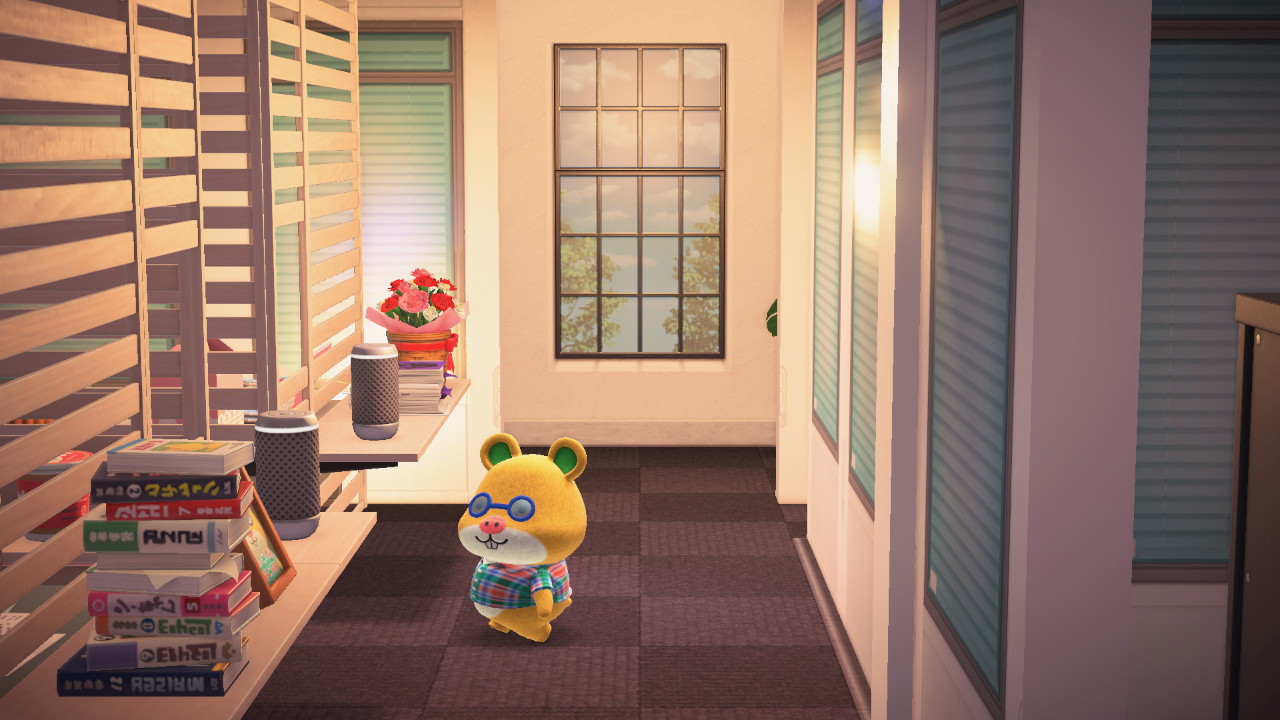 Give your villagers some of that souvenir chocolate

The souvenir chocolate is the only item that is always in the Paradise Planning Shop. While I bought myself a box as a, you know, souvenir, I also brought some back with me to give to my villagers. When you give one of your villagers chocolate, they ask about your new job and mention how they’d love to check out the resort.

If you say yes, they’ll come with you to work (via a really cute cutscene of them in the airport with you).

While they’re on the beach, you can ask them about having a resort home of their own (once you get dressed for work).

Got vacationers asking for homes that are similar to someone else’s? Make them roommates!

After a while, I realized that I had some duplicate requests, and while I certainly could make another gamer paradise for someone new (especially since the catalog increases as you unlock more items), I thought it’d be more fun to just pair the two together.

You also get to name their home, which definitely gives me way too much power.

As far as I can tell (and as far as I’ve seen when Googling it), there is no limit to the number of vacation homes you can make. You can even put vacation houses on the same plot someone else already has.

There is a lot of great stuff about the Happy Home Paradise DLC, but this is probably the perk I appreciate the most.

The Paradise Planning catalog is full of items that weren’t in the game before, a lot of which are items I’ve been wanting for a while. As you get access to more items while making homes, you will, eventually, be able to buy the items yourself from Wardell.

Which means you don’t have to wait for them to show up in the shop.

From what I can gather, you just have to buy enough items from the shop for Wardell to be thankful for your business, then he gives you access to the entire catalog, which carries EVERYTHING YOU HAVE BEEN DECORATING WITH! There are some items you can’t buy, like the stuff you need DIY recipes for and gifts you’ve received, but if you’ve had your eye on that crane machine? In pink? You can just buy it. Because the items automatically come in all of their alternate colors.

When I tell you I bought four pink crane machines… 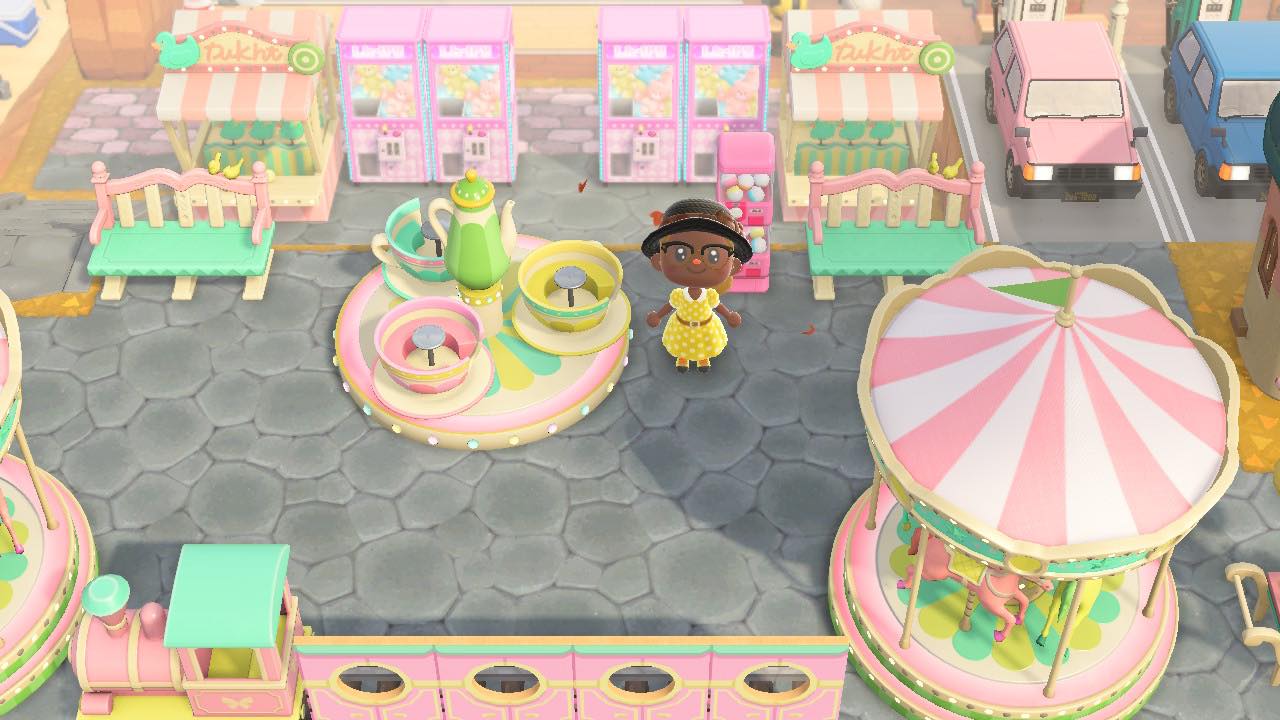 There’s a limit to how many items you can buy per day (5 is always the magic number) and you have to use poki instead of bells, but between pay raises and the ability to convert bells to poki (this gets unlocked as you design more houses), it’s an absolute godsend to be able to just BUY something in pink instead of hoping it shows up or customizing it with Cy.

Yes you can put gyroids in your vacation homes

Once you get access to your own personal collection you’ll start to see things like museum items you’ve given to Blathers, creatures you’ve caught, and, of course, gyroids.

Once the dance party was over and I went back to work this morning before, well, coming into work to write about this (lol), I figured that things would be pretty much the same.

Then I saw Flick’s dad wandering around the resort, looking for the school so he could give a presentation on bugs that, in turn, gave me the ability to let bugs loose on my vacation homes. You have to have the bug in your pocket beforehand, but yes, you can let the things Blathers hates most loose if you’d like.

I also, apparently, can add a second floor to my restaurant now.

Oh, and I can redecorate my villager’s homes WITH the catalog I have from work. No need to buy new items, and no need to use your own inventory, you get to use what you have at Paradise Planning. It costs $9,000 bells, but in return, Tom Nook will give you Nook Miles – something I desperately need now that I’m working on this:

That’s about as far as I’ve got into the game after the big party, but it looks like you’ll continue to unlock things throughout. With there being no limit on how many homes you can make, this is definitely a DLC pack that’ll keep us busy for a while.

Now I just have to figure out how to make more room on my own island for everything I’ve been getting from work.