Happy Friendsgiving: 5 Lessons From Pop Culture About Spending Holidays Away From Home

These days, more and more of us are moving farther and farther away from our families for various reasons and can’t always “get home” for holidays. Thankfully (because it’s Thanksgiving), the sentiment in the above clip (minus the kissing of arses) is also true. The family of the 21st century is made up of friends, so when you celebrate Friendsgiving, you are celebrating with family.

What can we learn from celebrating Thanksgiving with our friends? Allow these fictional friend groups to teach you a little something about what Thanksgiving is all about! 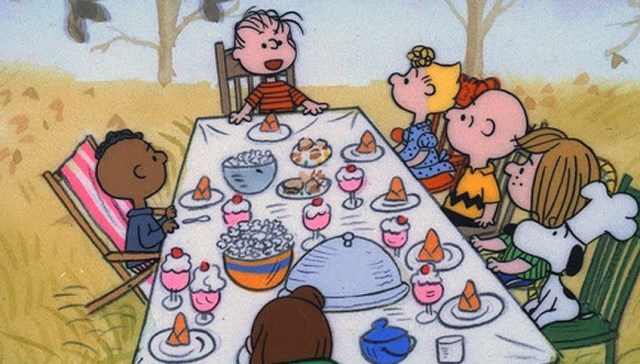 At first, Peppermint Patty isn’t having it, but Marcy reminds her that the point of Thanksgiving is to be grateful, and that the food isn’t as important as the friends with whom you share it. It’s something we should all keep in mind next time someone graciously invites us over to their home to celebrate this holiday. No matter what’s on your plate, there’s plenty of reason to be thankful. 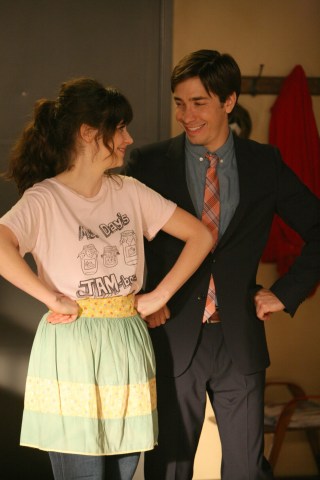 New Girl – “Thanksgiving” (2011)
Lesson learned: Friendsgiving is not “New Crush-giving.” It might not be the most appropriate way to spend time with a new love interest.

A common thread that pops up in pop culture Friendsgivings is that bringing a new crush is super-awkward. It’s one thing if you’re bringing a significant other, but it might not be the best time to spend time with a new romantic interest—especially when you’re sacrificing chill time with your buds.

On the first New Girl Thanksgiving episode, Jess invites a music teacher from her school on whom she has a crush. Of course, this puts her in extreme perfectionist mode, because she wants to make a good impression, which only stresses her out, stresses out her new roommates (who were used to keeping it low-key and watching football on Thanksgiving), and it all ended up with a turkey burning in the dryer (don’t ask).

It all turned out OK in the end, but one of the major advantages to a holiday spent with friends than a holiday spent with family is that it can be whatever you want it to be. You can design the holiday however you want, and it doesn’t have to be stressful. Maybe hanging out with the new crush can be a New Year’s thing (new beginnings, clean slate, new Horizontal Mambo partners!), but Friendsgivings should be as stress-free as possible without the added pressure of needing to impress. 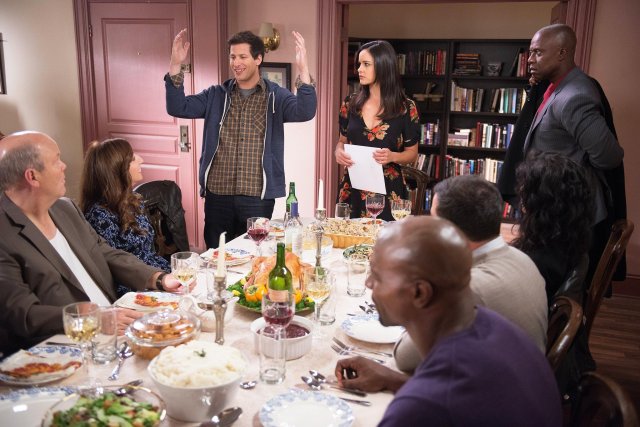 Bringing a new crush to Friendsgiving isn’t the only unnecessary source of stress. On Brooklyn Nine-Nine‘s first Thanksgiving episode, Det. Amy Santiago decides to use hosting Thanksgiving as a way to worm her brown-nosing way into Captain Holt’s good graces. As is her way, she over-planned, overscheduled, and overestimated her own cooking skills. Even worse than that, she built her hopes up way too high, so that when Captain Holt was suddenly called away on a case, she was hugely disappointed. Thankfully (there’s that word again), Santiago and the rest of the Nine-Nine had a make-up Thanksgiving at the precinct where they all gave thanks for each other.

Ulterior motives are never a good reason to host Friendsgiving. Only host if your primary motivation is good times with good friends. Anything more will just suck all the fun out of your day. 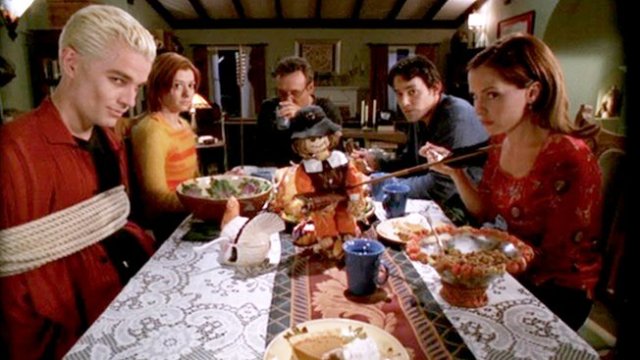 Buffy the Vampire Slayer  – “Pangs” (1999)
Lesson learned: Celebrating with friends allows you to think about the complexities of Thanksgiving.

Let’s face it, our generation understands the complexity of Thanksgiving as a national holiday in a way that our parents and grandparents didn’t. After all, we grew up watching things like the now-classic Thanksgiving play scene from Addams Family Values. Like, sure—it’s great to set aside a day for gratitude. And sure, the pilgrims sat down with some Native Americans. But it’s hard to escape the fact that the only reason the pilgrims made it is because some Native Americans taught them how to live here, and those Native Americans were pretty much paid back with genocide and disease. Good job, Europe!

The lesson of “Pangs” isn’t necessarily one that the characters learn over the course of the episode, but it is one that we can talk about with our friends if we get together on Friendsgiving and watch holiday-themed episodes of stuff. After all, the entire story of that episode of Buffy is that a Chumash vengeance spirit is seeking vengeance against a society that has hurt the Native Americans. And what happens. Buffy, the little blonde woman, destroys it. In this day and age, it’s hard not to see how problematic that is. In fact, it’s hard to see how Whedon and Co. didn’t see that episode as problematic back then. But that makes the episode ripe for conversation with our friends at Friendsgiving. Because seriously—try having that conversation with your parents or your Uncle Bob.

Yeah, that’s what I thought. 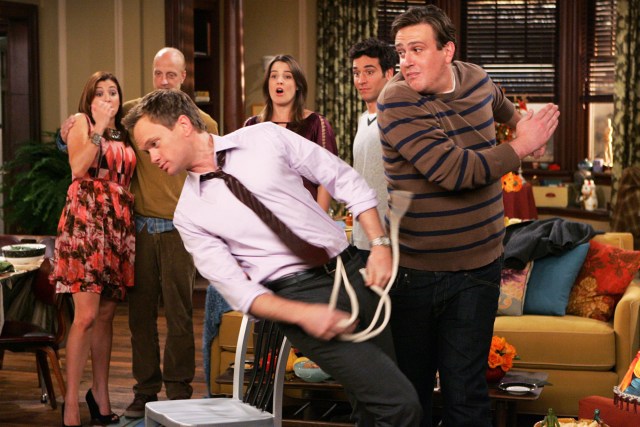 How I Met Your Mother  – “Slapsgiving” (2007)
Lesson learned: Nothing can stand in the way of true friendship—not even break-ups or mental terrorism.

If you were a fan of How I Met Your Mother, you know about the Slap Bet. Marshall won a bet, and in doing so, won the right to slap Barney as hard as he could five times. The kicker? Those five times could happen at any time. By the time this episode rolled around, two of the slaps had already happened. This time, rather than leave Barney in suspense, Marshall told Barney he was getting slapped on Thanksgiving, setting up a countdown clock and calling the day “Slapsgiving.” This ended up being much, much worse. Meanwhile, Ted and Robin had just broken up, and were struggling with whether or not they could actually stay friends.

Ted sums it up best at the end of the episode: “Friendship is an involuntary reflex. It just happens. You can’t help it.” Marshall slaps Barney, and they end up singing a song about it together. Ted and Robin struggle, but realize that their friendship is worth saving despite the awkwardness and difficulty. When friendship is true, no amount of holiday drama can tear you apart, and that is something for which we should truly be grateful.

So, whether you’re spending Thanksgiving with family, friends, or even just having a night in alone or just with your significant other, make sure you’re surrounding yourself with the things and/or the people for which you are truly grateful. The things and people that make you really happy, and around which you can completely be at ease and yourself. Then let the gratitude flow.

Have a Happy Thanks/Friendsgiving, everyone!