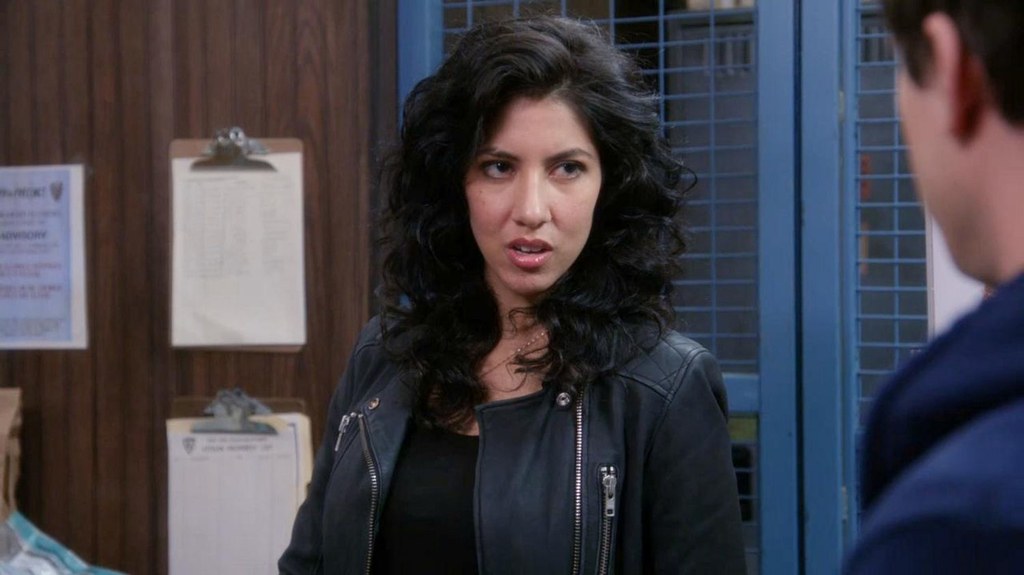 Happy Bisexuality Visibility Day, Mary Suevians! On this wonderful day, let’s celebrate our favorite bisexual characters in film and television. While we’ve still got a long way to go in terms of equal representation on screen, we’ve seen an upswing in amazing bisexual representation onscreen that manages to avoid the worst of the tropes and give us well rounded, complex characters who remain a beacon of hope for fans who want to see themselves reflected onscreen.

First off, let’s talk about Rosa Diaz (Stephanie Beatriz) from Brooklyn 99. Rosa’s sexuality was revealed in the show’s fourth season. Beatriz herself is bisexual, and released this powerful statement on her character’s sexuality in an interview with Entertainment Weekly:

“Not to say that my story is the same as Rosa’s at all. It’s not. But there were things that we wanted and thought would be really important — like the word itself: bisexual. To me, that’s an important word in my coming out. I know that not all people are totally celebratory of that word because it’s from a time where it was like these two genders — that’s all there is. And now there’s a lot more flexibility and fluidity in sexuality, which is why sometimes I gravitate toward the word queer as well. For me, bisexuality includes people that are trans, it can include people who identify in different kind of ways. But for Rosa, there was a point for her where she heard that word somewhere along the line and she saw herself in that word, so for her, it was important for her to identify in that way. I suggested that that word was really important to Rosa and that it also would be really important to the bi community to have that word said aloud on TV.”

This is an incredibly powerful statement, as oftentimes bisexual is seen as a dirty word on television, with characters preferring to say they “go both ways” or some other turn of phrase. Beatriz is right, it’s important to have Rosa talk about her sexuality and use the term bisexual, because that moment of visibility matters to the community. It means that without a doubt, Rosa identifies as bisexual and that no one can take it away from the community. This is why Rosa matters so much; it also matters that Rosa is a bisexual woman of color who doesn’t fall into any stereotypes. She’s just Rosa, who fans adore, who also is bisexual.

Another excellent bisexual character on TV is Darryl (Pete Gardner) of Crazy Ex-Girlfriend fame. Darryl started his arc as Rebecca’s weird boss, who’s in the middle of his divorce from his wife. When the second half of the first season rolled around, he found himself drawn to White Josh (David Hull), and eventually realizes he’s bisexual. At first, he loudly proclaims himself to be “both-sexual,” but that only lasts for an episode before he adopts the term bisexual. He even gets a peppy musical number called “Gettin’ Bi” where he talks about the myths surrounding bisexuality.

It’s important to note that series creators Rachel Bloom and Aline Brosh-McKenna spoke to GLAAD about enduring stereotypes of bisexuality to make sure they didn’t fall into any pitfalls with either Darryl’s song or his story in general, as neither Bloom or McKenna identify as bisexual. This is an important moment of making sure they’re properly representing a community, rather than just assuming they know what’s best.

It’s worth noting, as we celebrate portrayals of bisexuality on TV, that by the middle of 2017, 62 lesbian and bisexual female characters had been killed off over the past two television seasons. LGBT+ identifying women are oftentimes killed off for shock value or to show that every can die, because hey, straight characters are more important.

We’ve still got a long way to go in terms of equal representation, but for today, let’s celebrate our favorite bisexual characters and what they mean to us. Let us know in the comments who your favorites are, be it canon or headcanon. And have a happy day to one and to all!