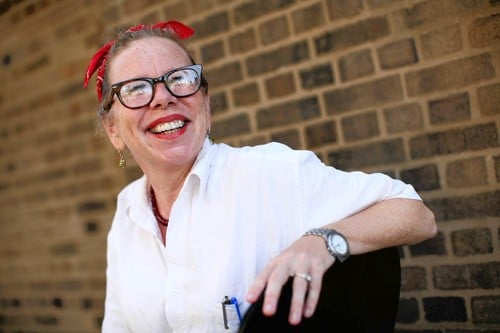 Lynda Barry, celebrated cartoonist with a career that has lasted decades, is celebrating her birthday today! We’ll be dedicating this space to her, and in case you’ve never heard of her, we’re going to introduce you! After the jump, more about Barry, some of her work and where you can get her new book.

A professional cartoonist since her first strip was picked up at the age of 23, Lynda Barry is best known for her syndicated strip Ernie Pook’s Comeek. She went to college with The Simpsons creator, Matt Groening, whom she dated, and from whom she received (and rejected) a marriage proposal. But he is the one who took it upon himself to publish Ernie Pook’s Comeek in their college newspaper without telling her, effectively jump-starting her career as a cartoonist. They remain friends, referring to each other as “The Funk Queen of the Galaxy” and “The Funk Lord of the USA,” respectively. (She also still sends him YouTube videos.) And what makes this woman the Funk Queen of the Galaxy?

Barry primarily focuses on the perspective and relationships of young girls in her comics, with themes of harsh reality combined with dark humor. She has also done a lot of autobiographical and semi-autobiographical work, including the graphic novel One! Hundred! Demons!, which began as a feature on Salon (where she still contributes), and the Eisner Award-winning What It Is. Both books feature Barry’s talents for color and collage. Here is a page from One! Hundred! Demons!, courtesy of Ladies Making Comics: 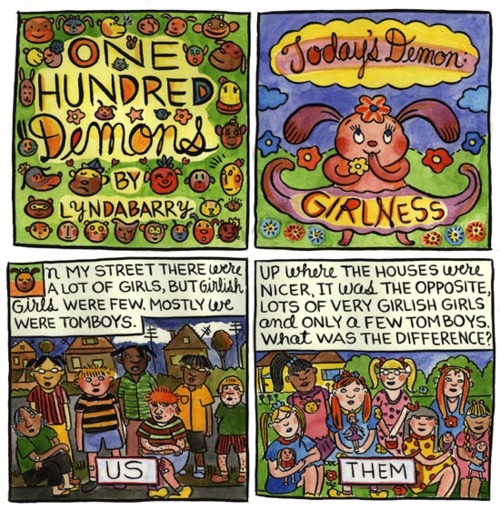 In addition to her cartooning, Barry also writes books, such as The Good Times are Killing Me, which became an off-Broadway musical, The Greatest of Marlys (the namesake for her “official unofficial” Tumblr page), The Freddie Stories, Cruddy: An Illustrated Novel, and Picture This, and many more titles of original work and collections. She also has a spoken-word storytelling CD which includes semi-autobiographical material. Most recently, she released Blabber Blabber Blabber: Volume 1 of Everything.

But one thing she does besides create her own art is teach others to uncover their own talents, even if they think they have none. Barry conducts her writing workshop “Writing the Unthinkable,” which is geared towards people who are not writers, in Rhinebeck, New York and Austin, Texas. This is how she advertises it:

“THIS CLASS WORKS ESPECIALLY WELL FOR ‘NONWRITERS’ like bartenders, janitors, office workers, hairdressers, musicians and ANYONE who has given up on ‘being a writer’ but still wonders what it might be like to write.”

And she isn’t about the “craft” of writing — more like that organic, untarnished creativity we all had as kids:

While Lynda Barry’s comic strip days might be over, she has proven herself to be a huge creative force outside of the cartooning world while still reminding us with her various collections that she’s still an important part of the field. So, many happy returns, Lynda Barry!