'Hannibal' Fanart Will Hang at the U.S. Capitol

In a Glorious Turn of Events, Hannibal Fanart Will Hang at the U.S. Capitol 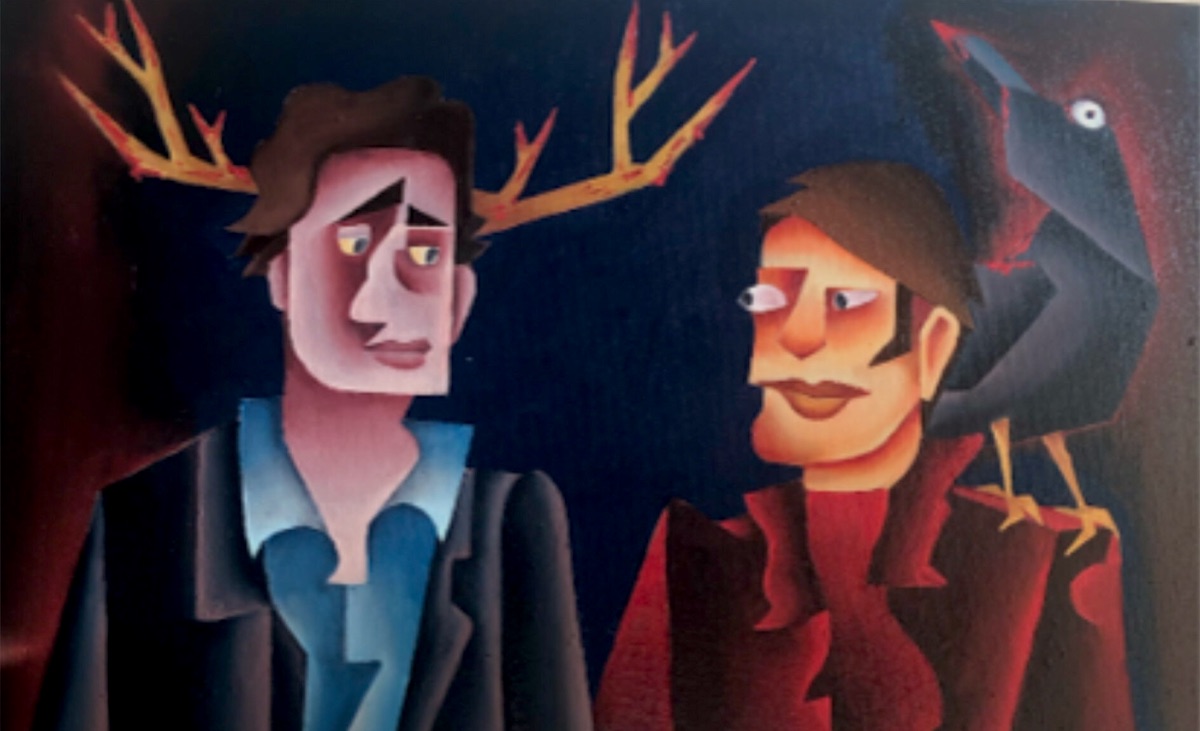 It’s unlikely you had this on your 2021 Bingo card: a teenager’s Hannibal-themed art project was chosen by a New Jersey Congressman as his district’s winner for the Congressional Art Competition. The painting will hang in no less than the U.S. Capitol—and the story is the stuff that Internet phenomenons and fandom dreams are made of.

Allistair Palmer, a high school senior and talented young artist from New Jersey, is at the center of this delightful chaos. Palmer, who uses they/them pronouns (and appears to have recently shared via TikTok that their chosen name is Allistair), had their painting, which is titled “Dolce,” selected by NJ Congressman Andy Kim from 12 paintings in competition.

When Kim tweeted out the winning painting, however, he could not have anticipated the response. Kim said he had no idea of the Hannibal connection with Palmer’s work before his tweet started to go viral and garnered many fan reactions, including support from Hannibal creator and showrunner Bryan Fuller. “I didn’t know that it was related to a TV show,” Kim told The New York Times. “I just thought it was really beautiful, well executed, and it was really striking.”

I’m proud today to announce that Kathleen Palmer, a senior from Shawnee High School in Medford, is the winner of the Congressional Art Competition from our district. Her artwork, which you can see below, will now be displayed in the U.S. Capitol. pic.twitter.com/j7SlrDxsEd

Kim’s judgment regarding Palmer’s art is on the nose. The oil painting is lovely and evocative, and according to the Times, it took Palmer four weeks to complete. Some of those who advised on the competition’s art selections, like Kim, clearly only saw an intriguing, Cubist-style work of two men gazing at each other.

Making the scene surreal, one of the men has stag horns, and the other, dressed in blood-red, has a bloody raven perched on his shoulder. He also has a pen and notebook in hand, but in the world of art, that could mean anything. If you’ve never seen NBC’s 2013-2015 series Hannibal, there’s no reason you’d see anything more here than what meets the eye, with some intriguing symbolism to ponder.

But fans quickly identified the painting as an homage to the main characters on Hannibal—troubled FBI profiler Will Graham (Hugh Dancy) and his therapist/coworker/serial-killing cannibal/life-partner in crime Dr. Hannibal Lecter (Mads Mikkelsen), complete with recurring motifs of the show (like those stag horns). That’s when this story took on another life of its own. Hannibal fans, who remain active and ever hopeful of a resurgent 4th season, responded to and retweeted Kim’s tweet en masse. The tweet now has more than 12,000 likes, with popular responses and memes propelling the story’s virality all the way to the Times.

This also led to showrunner Fuller—who vocally supports fandom activities around the show, including the shipping of Will/Hannibal, or “Hannigram”—showing his enthusiasm for the unexpected Congressional spotlight on Hannibal. Fuller retweeted Kim’s original post, and has since been on something of a tear regarding the painting. Here are a few recent tweets from Fuller’s feed:

JUST SO EVERYONE KNOWS WHO @RepAndyKimNJ IS AND WHY ELSE WE SHOULD LOVE HIM – Congressman Andy Kim on a Dark Day for America https://t.co/EYvoDrV1iZ via @gqmagazine

And to his credit, Kim seems to be getting in on the fun.

If I invite you to the Capitol to see the artwork, does that mean there will be a season 4?

As for Palmer, they never imagined their project reaching such great heights. “It was just a casual art-class project,” Palmer told the Times. “I didn’t expect it to go this far.” Kudos to Palmer for seeming to take the explosion of interest and attention around their work in stride. I do not think I could have fielded a call from The New York Times about my fanworks when I was 17. But Palmer has clearly put a lot of thought behind their artistic choices:

The painting reflects the dynamic between the characters through its use of color, Palmer said. The warm red tones on Hannibal’s side of the painting evoke the serial killer’s bloodlust and passion, while Will’s cool blues signify how he is both hunting and being hunted in the pair’s cat-and-mouse game.

Further, the Times article makes for a fun read as it attempts to explain to New York Times weekend readers what things like fanart and “slashfic” are.

A common form that takes appears in shipping, in which two characters are imagined in a romantic relationship or an audience supports them being together. It often happens with two characters who have undeniable chemistry, even if the source material doesn’t come right out and say it. (The term “slash” is used for same-sex relationships, and “slashfic” for art and writing that places them together.)

Ah yes, “slashfic” art, a common and well-known phrase those of us in fandom use often because it is currently 1999. Anyway! Here are some of our favorite reactions and memes that news of Palmer’s historic win generated across the Internet.

Babe wake up the gay cannibals are on display in the U.S. Capitol! pic.twitter.com/BpdTixI3x8

Our canon being recognised in the capitol… Perfect pic.twitter.com/W0KIMv6Un3

WAITWAITWAIT I HAVENT WATCHED HANNIBAL BUT IM PRETTY SURE THAT’S THE GUY?? THE DUDE?? MR CANNIBAL MAN AND HIS CANNIBAL BOYFRIEND?????

Hannigram art in the capital. We are getting a season 4 I can feel it

i would make a hannibal joke but i think we need to acknowledge that the artwork is, to understate, really good. i love it more than i love the fact that two gay cannibals are going to be displayed in the US capitol

All the other fandoms go home, we have won

I love everything about this story, and I absolutely adore the earnest coverage it is receiving from more mainstream media outlets. I love the support from the show’s creatives and from a U.S. Congressman. In the end, I’m left thinking about one of Fuller’s tags on his retweet—#FANARTISART. It is art, often incredibly accomplished, gorgeously wrought labors of love. More fanworks recognized for their sheer artistry, please.