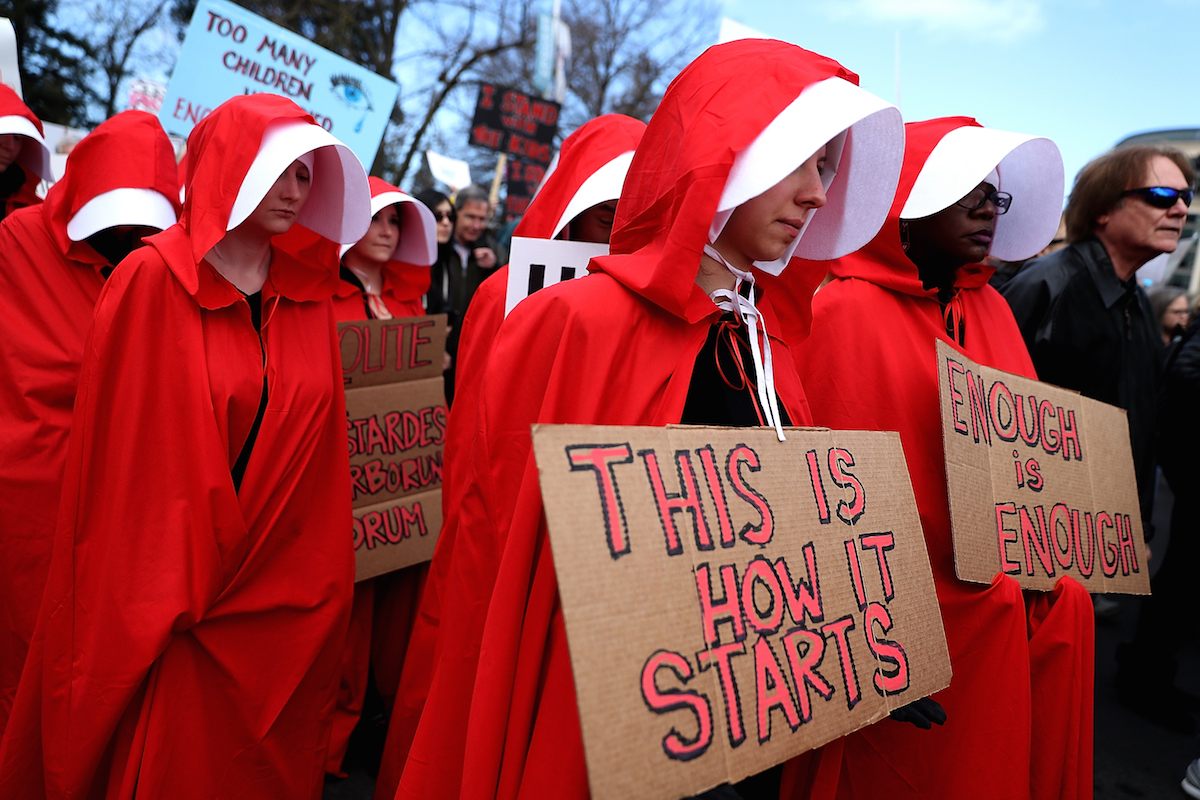 Since the premiere of Hulu’s The Handmaid’s Tale series adaptation last year, the Handmaid, draped in long red robes and a winged white bonnet, has shown up time and again as a symbol of protest, specifically in the fight for women’s reproductive rights. From Ohio and Texas, all the way to Ireland, women have donned the Handmaid’s costume as a silent symbol of dissent in the face of attacks on access to abortion and other health care needs. Handmaids stood outside the Golden Globes, a looming reminder of women’s systematic marginalization and silencing.

On the red carpet for the recent season two premiere, the AV Club asked members of the show’s cast and creative team about their feelings on creating such a visceral symbol of rebellion. In short: they’re proud of it. It looks like costume designer Ane Crabtree wasn’t there, or else just wasn’t interviewed, but pretty much everyone asked about the meaning of the costumes praised her work, as well as Margaret Atwood for creating the image of the Handmaid in the first place.

In season one, the Handmaids, forced to walk in pairs or groups or entire streams of bright red robes coming down the streets, were clear symbols of menstruation, of fertility. That blanket symbolism, as well as the blinders of their hoods, reduces these women to their bodies and to their strictly defined gender roles. It strips them of their autonomy and brands them visibly with their forced gender- and class-based mantle. The show, like the novel, struck a nerve with many women because that sort of government-imposed lack of bodily autonomy is a terrifying reality we’re seeing on the horizon.

Yvonne Strahovski (Serena) reminds us that the “art imitating life, life imitating art” aspect of the show was “very much accidental” (it was assumed a Clinton presidency was in the bag when they started production), but that doesn’t make it any less powerful to see the book and show spring to life. The show’s Executive Producer Warren Littlefield told the AV Club that they’re “honored to help give [protestors] a voice,” or a means by which to express that voice. He, too, notes that “the world we’re living in feels each and every day like it’s a little more pre-Gilead.” (You can watch the red carpet video here.)

The use of the Handmaid uniform as a form of protest is a message: We see it coming, and we’re going to fight it, and in the meantime, you should be ashamed to be the villains in this story. As Offred says in the season one finale, “They should never have given us uniforms if they didn’t want us to be an army.”