Why The Handmaid’s Tale Should End June’s Story

Let another woman have the spotlight. 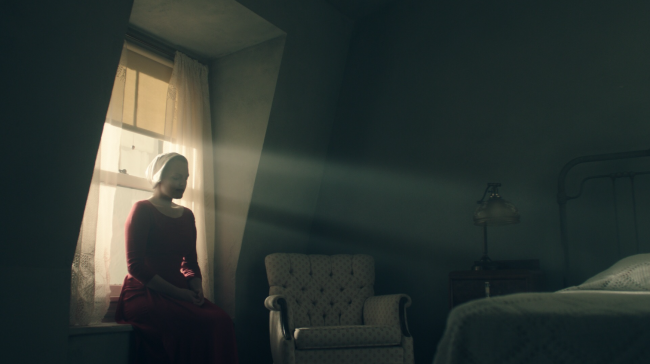 The ambiguous “ending” of The Handmaid’s Tale show is the perfect note to wrap up June/Offred’s story with no nebulous epilogue of historical notes to assuage the viewers’ questions.

When it was revealed that a second season was greenlit—with the showrunner Bruce Miller hoping for more seasons—I reacted to the news with both trepidation and excitement. On one hand, what more can you unravel in June’s self-contained story? On the other hand, Margaret Atwood’s literary vision of the dystopic scope of Gilead does beg for further exploration.

When darkness descended upon June’s face, I was satisfied with not knowing more. Her visage drifts into darkness with no knowledge of whether she will see light again, but at the same time she has accepted peace in her display of momentary agency in Gilead. No additional seasons could be ordered and I would still find it complete. The thread stops here.

But if more stories are along the way, I feel it’s best to move on to exploring a different character within June’s universe. The prospect of another season is the showrunner’s opportunity to explore dynamics beyond the scope of a white woman’s window and perhaps switch to another anchor-point protagonist.

Turns out, June will remain the focal point, given the hints of Season Two’s contents. With June’s pregnancy, Elizabeth Moss suggests that Season Two will delve into June’s introspection on motherhood. However, Season One had gradually offered diversions from June’s point-of-view, distributing the narrative focus to Ofglen/Emily, Serena Joy, Nick, and Moira before reverting to June again.

If June is to resurface on-screen next season, I hope Season Two will allow space for more focal point characters and other survivors to gain equal footing in the overall story. After all, I never viewed June’s account as The Handmaid’s Tale. Rather, she told A Handmaid’s Tale, and a very vital one too.

But just as June had been in the foreground, these other characters, including those exclusive to the book so far, offer intriguing narrative doorways.

When Rita, the Martha servant, gathered the written testimonies, it’s a cliffhanger of the garden of stories, viewpoints, voices, beyond June Osbourne’s, waiting to be told. Like how June entrusted the letters to a background character with scarce screen-time, June should pass the torch to another woman.

Caroline Cao is a Houstonian Earthling surviving under the fickle weather of Texas. When not angsting over her first poetry manuscript or a pilot screenplay about space samurais, she enjoys acting in cheesy improv performances for BETA Theater, experimenting with ramen noodles, and hollering vocal flash fics on Instagram. She lends her snarky/scholarly mouth to Birth Movies Death and The Script Lab.

Come visit her blog and check out her no-nonsense writing and screenwriting services. She’s also lurking in the shadows waiting for you to follow her on Twitter or Tumblr and read her Star Wars fanfiction.