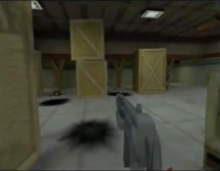 You nostalgia, you lose: Redditor soxy found this vintage trailer for then-hot upcoming release Half-Life on a You Don’t Know Jack Volume 3 CD-ROM from 1997. Awesomely, Redditor soxy was recently playing with a You Don’t Know Jack Volume 3 CD-ROM from 1997. Anyway: It’s somewhat amusing that the trailer touts a November 1997 release date when the game didn’t actually come out until November 1998. From Valve’s very first game, Valve time was a thing. But it was probably worth it, judging by the fact that in the interim, the game leapt from being the GoldenEye clone we see in the trailer to the groundbreaking FPS we remember it as today.