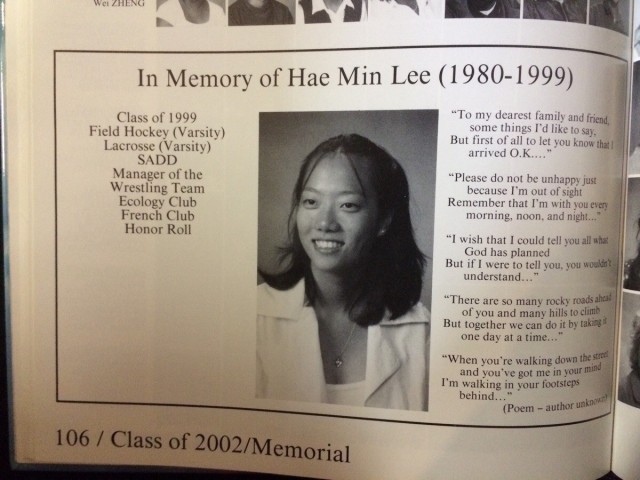 The groundbreaking first season of the Serial podcast ends this week, and some intrepid Redditors are ensuring that Hae Min Lee’s memory will live on even after excitement over the show inevitably fades away.

The 28,000 subscribers of Reddit’s Serial community are joining together to raise funds for the Hae Min Lee Memorial Scholarship, all of which will be donated to her high school, Baltimore Woodlawn. Redditor and fund administrator Jake White explains,

Listeners and members of the /r/serialpodcast subreddit have created a huge and wonderful community, and want to give back to the community on which the Serial Podcast first season is focused. With this intention, a few users have [committed] to get the “Hae Min Lee Memorial Scholarship” off the ground.

Along with fellow Redditor Pamela Mauerhaun, White has coordinated with Woodlawn’s guidance counselors to set up a fund through CharitySmith.org. The $700 service fee has already been paid by an anonymous Redditor benefactor. According to the crowdfunding site,

The scholarship will be given to Woodlawn High School for them to award to students going on to further education. We have decided to let them decide which students best qualify for the grants and the amount of each award.

She was on the honor roll at Woodlawn High School, in addition to being in the French Club, the Ecology Club, and manager of the Wrestling Team. Hae loved sports and played on the Varsity Lacrosse and Field Hockey teams.

The fund is an important statement from a fan base that, by the nature of Serial‘s medium and the crime it examines, rarely affords its female victim a voice. Although listeners hear from her ex-boyfriend and accused killer Adnan Syed and his family most episodes, Hae–whose family is largely unaware that the podcast exists–is represented mostly by passages from her high school diary and occasional recollections from friends. Although the podcast examines cultural and racial biases, Serial (or at least large portions of its listeners) are arguably guilty of ignoring the gender politics inherent in the show’s popularity, so it’s awesome to see members of the Subreddit engaging so responsibly with their “fandom.”

Organizers of the fund say they were unable to contact most of Hae’s family about the scholarship, although they did speak briefly with her brother after he made an appearance on the Subreddit last November.