Gwyneth Paltrow Embarrasses Herself By Knowing Nothing About Her Own Company

We all know that Gwyneth Paltrow’s lifestyle website, Goop, is basically some bullshit. From its overpriced food solutions and shirts ($95 for a goddamnn tank top!) to its “healing” solutions (Earthing, anyone?), it’s basically a destination for people with tons of money and very little common sense.

Still, I’ve perused the site from time to time. What? Sometimes, you just want to look at pretty things. When you’re looking for a mindless time-waster, there’s nothing like looking at a bunch of Instagram-ready photos of stunning clothes or locations with pretty flowers. So, I’m very familiar with this particular brand of overpriced charlatanry, but the inaccessibility and the dubious science aren’t even why I’m so peeved right now.

Paltrow was on Jimmy Kimmel Live! last night, which you can see in the clip above. Kimmel asks her about Goop, which is now over 10 years old and Paltrow’s “full-time job.” After professing himself to be a fan, and knowing exactly when her newsletter comes out, he then goes in for the real meat and potatoes of the interview: asking her what the hell is up with stuff like Earthing and the “Jade Egg practice” (women sticking jade eggs up their who-has to strengthen their pelvic floor).

Here’s the thing, she laughs, and has very little to say about any of it…because she doesn’t know what any of it is or means. When asked about Earthing, for example, after admitting to knowing nothing about it and giving a brief run-down based on what she’s been told about it, she laughs it off and says “I don’t know what the fuck we talk about!”

Same for her conversation with Kimmel about jade eggs. The entire interview had me cringing because, despite knowing that she’s actually an intelligent human, I’ve never heard her sound more ditzy. Meanwhile, Kimmel’s tone totally made it sound like he was luring her in as a “fan” to embarrass her by asking her to talk about this shit, and she wasn’t prepared.

She’s an entrepreneur who is running a lifestyle brand. Now, I know that CEOs don’t necessarily know every single inch of their websites front to back. What they should know front to back are the solutions they offer their customers. No one should know that better than they do. It irked me that we have this woman running a business who isn’t the least bit embarrassed by the fact that she knows so little about the solutions her own company is offering people. It is embarrassing, and it kinda makes female entrepreneurs look bad.

I don’t think Jessica Alba would pull this shit for The Honest Company, is all I’m saying.

Huh. It’s right there in the name, isn’t it. Perhaps I shouldn’t be too hasty. “Goop” does sound a bit murky and muddled, doesn’t it?

Anyway, what makes it worse is that the entire site is geared around her name and likeness, giving the appearance that she endorses everything on the site. Case in point, here’s the page on Earthing: 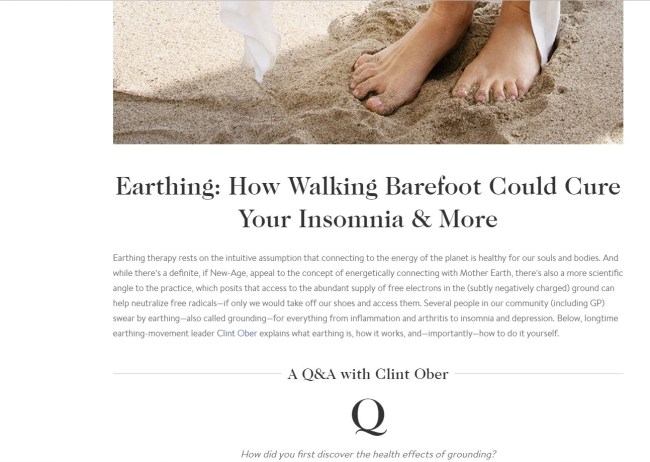 Right there on the page it says “Several people in our community (including GP) swear by earthing.” Really? Because she’s going on television not knowing anything about it and talking about it in a joking tone…kind of like she knows it’s bullshit, but what the hell! People will buy anything if you use the word “natural.”

I always want to root for women who start companies from nothing. Business isn’t easy for anyone, and for women it’s a billion times harder, even when you have as much privilege as Gwyneth Paltrow. Still, I haven’t been able to root for Paltrow in a long time. She’s out of touch, not only with the average consumer, but with her own business. Have I used the word embarrassing yet? Because that’s what this is. It’s embarrassing.