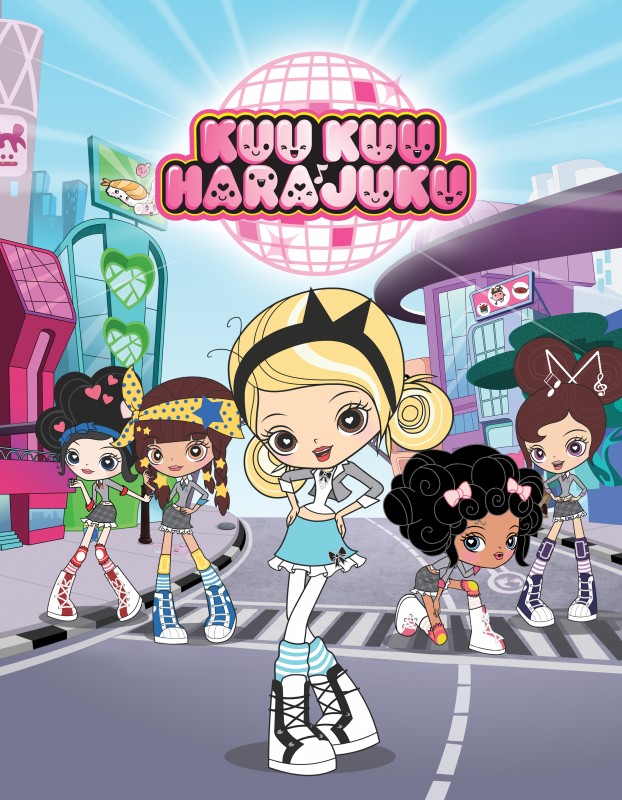 Back in the lazy, hazy days of the Early Aughts, a solo Gwen Stefani, having stepped away from No Doubt, debuted not only her first solo album, Love. Angel. Music. Baby., but also a new sense of style inspired by Japanese pop culture and the girls from the Tokyo neighborhood of Harajuku. Now, a cartoon inspired by her cultural appropriation is coming to Nickelodeon.

In her song “What You Waiting For?,” Stefani shouted out Harajuku, as well as the girls who live there and their fashion sense, in her lyrics (“You Harajuku girls/Damn you got some wicked style”), which was all very well and good. Then, she literally used Japanese women as props, hiring four Japanese back-up dancers (her Harajuku Girls) to follow her around everywhere while promoting the album and on tour, to add to her “look” and “style,” naming them Love, Angel, Music, and Baby. What’s more? They were contractually obligated not to speak. They just followed her around and stood there. Stefani was literally using them as props to promote her album and her nascent fashion line, L.A.M.B.

In this piece from 2014 at The Daily Dot, Nico Lang wrote about how unapologetic and seemingly uninterested Stefani has been in remedying her own ignorance or understanding the point of view of the Asians who’ve expressed their problems with both her Harajuku Girls and her 1990s bindi wearing.

Back in 2005, Margaret Cho addressed the Harajuku Girls on her blog in a way that was as sad as it was critical. She wrote:

“I want to like them, and I want to think they are great, but I am not sure if I can. I mean, racial stereotypes are really cute sometimes, and I don’t want to bum everyone out by pointing out the minstrel show. I think it is totally acceptable to enjoy the Harajuku girls, because there are not that many other Asian people out there in the media really, so we have to take whatever we can get. Amos ‘n Andy had lots of fans, didn’t they? At least it is a measure of visibility, which is much better than invisibility. I am so sick of not existing, that I would settle for following any white person around with an umbrella just so I could say I was there.”

Stefani’s response to this actually Asian woman who was complimentary to Stefani in the blog post and allowed herself to be vulnerable about being a member of a marginalized group and what that feels like was less than sympathetic. In an interview with Entertainment Weekly, Stefani responded to Cho’s blog post:

”She didn’t do her research!” spits Stefani, who says she’s been a fan of Japan and its mix-and-match fashion sense since first visiting the country with No Doubt in the mid-’90s. ”The truth is that I basically was saying how great that culture is. It pisses me off that [Cho] would not do the research and then talk out like that. It’s just so embarrassing for her. The Harajuku Girls is an art project. It’s fun!”

So … it’s an art project. Did those women collaborate with her in developing this “project?” Ie: is this partly their vision, too, in which they have input? Or are they hired elements of her project, used to manifest your vision of a culture that doesn’t even belong to her? Are they literally art supplies? 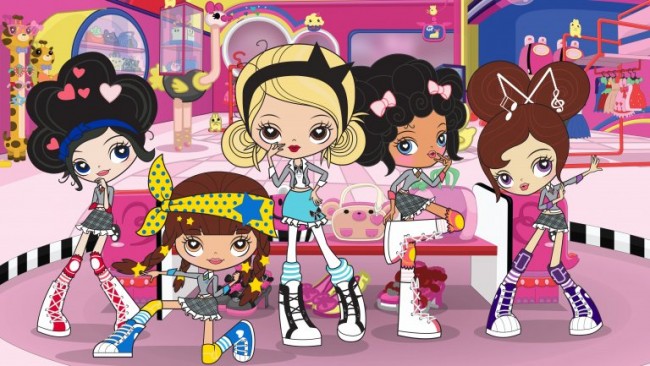 So, you might understand why I have mixed feelings about a 26-episode animated series using all that as a jumping-off point.

According to The Hollywood Reporter, the animated series, called Kuu Kuu Harajuku, has already aired in Australia, where it premiered in 2015. Now, the show is coming to Nickelodeon next month. Stefani created the show with Gillian Carr, Steve Aranguren and Madellaine Paxson, and Stefani and Carr also exec produce with Low Huoi Seong. Malaysia’s Vision Animation and Australia’s Moody Street Kids Productions produce.

As reported by THR, “the series centers on four Harajuku girls named Love, Angel, Music and Baby who form the group HJ5 with their inspirational leader, G. The girls are very talented, but every gig is interrupted by a fantasy-driven wild card before the first note is played. Angry aliens, serious politicians, invading creatures and cute monster pets foil various concert attempts, but G and her friends never give up.”

Okay. Well, right off the top, I notice that the Harajuku Girls are all different colors. Points for diversity, I guess, except that it seems that they appropriated Japanese culture only to just about erase it from this series?

While there’s one Asian male producer, a Malaysian Animation studio involved, and according to the show’s Wikipedia page, an Asian-Australian actress voicing one of the characters on the show, the creative team is overwhelmingly white, and the show was created by two white women. Also according to its Wikipedia page, the show is “inspired by [Stefani’s] ‘Harajuku Lovers’ brand” and is set in Harajuku World, which is convenient. After all, if the show is set in a not-real place, there’s plausible deniability when issues of cultural insensitivity come up. I can hear it now! “But it’s not Japan,” someone will insist. “It’s an imaginary place!”

More importantly, how long does Stefani plan on milking Harajuku for her own career? Most musical artists that have phases eventually leave them behind and move on to the next thing, but Stefani seems perfectly content to continue going to the same well.

And she hasn’t changed her opinion much since 2004. In a 2014 interview with Time Magazine, when asked if she regretted the Harajuku Girls, she said:

“No. There’s always going to be two sides to everything. For me, everything that I did with the Harajuku Girls was just a pure compliment and being a fan. You can’t be a fan of somebody else? Or another culture? Of course you can. Of course you can celebrate other cultures. That’s what Japanese culture and American culture have done. It’s like I say in the song [“Harajuku Girls”]: it’s a ping-pong match. We do something American, they take it and they flip it and make it so Japanese and so cool. And we take it back and go, “Whoa, that’s so cool!””

She’s a fan of Japanese culture and Harajuku fashion. There’s absolutely nothing wrong with that. The sticking point is that she expresses that by minimizing the very people and cultural she supposedly loves.

If you look at her performances with the Harajuku Girls, they’re always taking subservient positions to Stefani on stage. Sometimes, when they are purely backup dancers, that makes sense. However, even when performing songs like “Harajuku Girls” that are supposed to be expressing how cool she thinks they are, she sits in a throne as they kneel around her, and starts the song with them on the floor basically bowing to her, or alternately pats them on their asses as part of the choreography (so it’s not just black girls whose asses are used as props by white female performers!).

Hell, even the photos from Kuu Kuu Harajuku above feature “G” at the center, mostly upright while the other girls take bent/crouched positions around her, or with her front and center with the other girls well behind her. I get that she’s the lead character, but there are other ways to show that while also showcasing the friends as equals in an ensemble. If anyone involved just stopped and thought about it for a second, there are easy fixes to all of this, but that would require Stefani, or anyone else involved in her Harajuku “art project,” to actually care about giving marginalized groups a platform and a voice.

Kuu Kuu Harajuku premieres Monday, Oct. 4, and runs through Friday, Oct. 7, at 4PM before moving to its regular time slot on Saturdays at 8:30AM, if you’re curious. However, I hope that any kids watching this show will be watching with savvy adults. Children need to learn and understand that there’s a big difference between giving a culture props and using a culture as a prop.