I’m not convinced, but if you don’t want to find out what’s under that spoiler tag, don’t read the rest of the post.

In the 1973 story The Night Gwen Stacy Died, Gwen was captured by the Green Goblin, who had just ferreted out Spider-Man’s secret identity, and used as bait to lure him to the top of the George Washington bridge. She’s thrown from the bridge by the Goblin, and though Spider-Man catches her with webbing before she hits the water, she is already dead by the time he pulls her back up. It’s just one in a long trend of female secondary characters hurt or killed in order to raise the emotional stakes for the male main character, but at least we can say that her death had a significant effect on Spider-Man comics going forward, for better or for worse. Here’s one of the pictures that’ve been making the rounds: 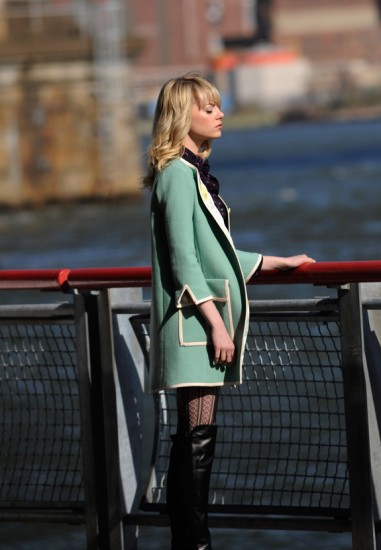 Where you’ll notice that it looks like Gwen is standing near a railing, and that railing is *gasp* near some water. Maybe she’s on a giant bridge and is about to be thrown off! Except if you live in New York City you’d recognize this railing as pretty clearly belonging to the edge of one of Manhattan’s riverside parks, not one of its many bridges, so you know that she’s about ten feet, maybe, from sea level. And if you’re going to make the argument that special effects could be employed to turn it into the top of a bridge, I have another New Yorker anecdote to share.

See, a couple years ago in the fall my roommate and I woke at 1am by what seemed at first to be the rising sun. When we actually looked out our windows, however, the blinding light that had fooled the birds into chirping all night turned out to be floodlights trained on the nearby bridge, aiding in the production of The Amazing Spider-Man. So if they had the money to go to a real bridge for the first movie, they’ve likely got the money to do it again.

This doesn’t mean that Gwen won’t die in The Amazing Spider-Man 2. After all, they’re introducing Mary Jane in this one and while I’d like to see Hollywood allow a male superhero to have a female friend in addition to a love interest, I don’t think it’s likely that TASM2 will be that groundbreaking. It’s very likely that the movie will play out the infamous Gwen Stacy death story arc. I just don’t think “vicinity to a bridge in the background” is definitive proof. Even if she is wearing a really similar outfit. We have a lot of bridges here!