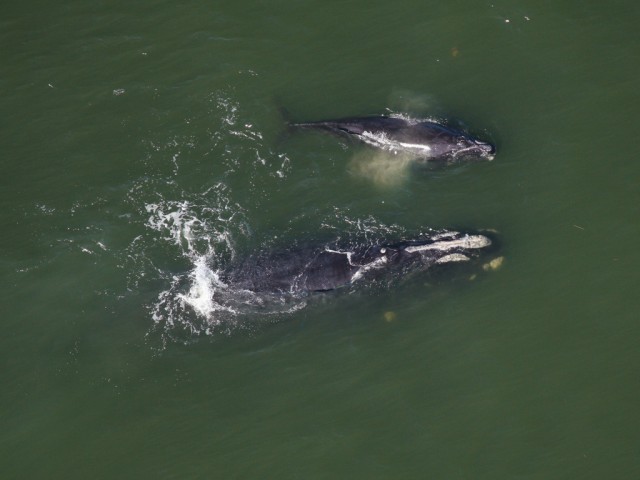 Last year, researchers found 116 dead right whales in the waters off of Argentina — all but three of them calves, or immature whales. That marked a startling doubling of whale casualties in the area the year before, and some researchers think they know what is killing the whales — legions of seagulls who dive bomb the huge animals as they’re surfacing for air, making a meal of the whales’ nutritious blubber and leaving the aquatic mammals with gashes in their hides up to four inches deep.

While seagulls aren’t typically animals associated with the phrase “apex predator,” their persistent hunting tactics can take a toll on the mighty marine mammals, say researchers at Argentina’s Institute for Whale Conservation. Whales’ size makes them more durable when they come under attack by gulls, but it also makes them big targets unable to mount a real defense against the sea birds. Kelp gulls, whose population in the region has boomed as the fishing industry provides plentiful waste for them to consume, also choose the most vulnerable whales as their targets — calves.

The gulls attack during the whales’ calving season, when mother whales arrive in the waters off Argentina’s coast with youngsters in tow. Lacking the lung capacity that allows adults to stay submerged for long periods of time, calves are forced to come to the surface for air more often, making them prime targets for patient kelp gulls, who take a few pecks from the hide of emerging whales every time they come to the surface. Those pecks add up to painful wounds, but the physical damage may be the least of the whales’ issues. The main problem, according to some researchers, is that these attacks disrupt the calves’ feeding routines, making it harder to get a full meal of whale milk from their mothers. According to researcher Mariano Sironi:

“The lack of nursing causes serious nutrition problems for the calves. Post-mortem studies have shown evidence of malnutrition, and this is a working hypothesis that needs to be confirmed with several studies.”

Until they can confirm their suspicions, though, whale researchers are taking no chances, and are planning a cull of the seabirds for later this month, though the tactic — which saw 140 of the birds killed by hunters last year — has not proven effective so far.