TMS Superficially Dives Deep Into the New Guardians of the Galaxy Vol. 2 Teaser and Poster

Do you need a hug?

They’re baaaaaaack. Well, not yet. But a new teaser for Guardians of the Galaxy Vol. 2 was just released and director James Gunn would like you to know that it is not a preview for a supposedly upcoming trailer. That doesn’t necessarily mean we won’t be getting an official trailer soon (who knows), but when one one does arrive, don’t expect it to look like this teaser.

To make it clear: the sneak peek just released is NOT a teaser-for-the-trailer; it’s a totally separate piece from the eventual trailer(s).

Now that that’s out of the way, we can dive right in. First off, Nebula’s back!

As you might recall from this post, I mused over the possibility of a Nebula solo film and made the mistake of implying there’s nothing left to do with her. Of course there is! Who knows if they’ll end up bringing bits of her Infinity Gauntlet storyline into the MCU but I’m just glad to see .01 seconds of her wonderfully colorful face here.

Yondu and Rocket teaming up? Okay, I know they’re just walking side-by-side but they look like they’re about to wreck something fierce. Is that what the cool kids are saying these days? I’m old, sorry. I still remember when Geocities was a thing.

With everything that’s happened this year (Bowie, Rickman, the election, Pokemon Go dropping the ball, bell bottoms somehow making a comeback, etc), I think we could all use an awkward hug from Drax right about now. He’s the kind of friend who will read you to filth, but everything he says is the truth so you just accept it and move on. Also, I hear he gives great hugs.

Update: Hello there, Baby Groot! How could I leave him out? He’s wearing a mini Star-Lord jacket. Today might not be Monday Cute but that image is preciousssss.

And, of course, the gang is back together. Space’s motliest crew must reunite to stop Loki and his evil forces—wait, that’s the plot for the Avengers movie. This one actually picks right up at the end of the first one in which Ronan the Accuser was defeated, Groot died but his remains spawned a Baby Groot, and we’re still on the quest to find out who Peter Quill’s parents are. Plus, there’s a big purple guy out there named Thanos on the hunt for the Infinity Stones, which have been littered throughout Marvel’s cinematic universe. And if you are to believe what James Gunn has said, the women in the film will play a bigger part this time around.

All in all, I’d say I’m excited for this. Are you? Before you answer that, take a gander at this nifty little poster from the good Samaritans over at Marvel because, like Oprah, they don’t believe in gifting  just one thing at a time. 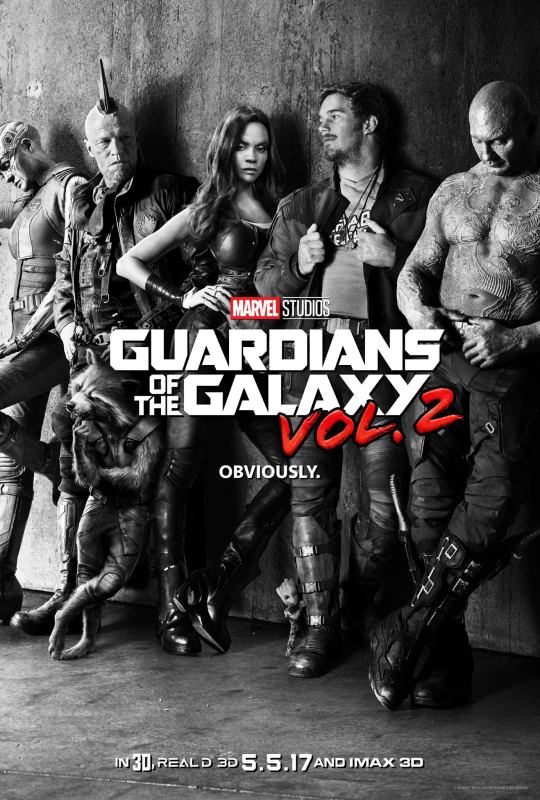 Now, pray tell, has your level of interest increased? Explain yourself in the comments below.

(via Marvel, image via screencap)