Guardians of the Galaxy Cartoon Picks Up Where Movie Left Off, Has Less Sex Jokes

"Less sex jokes" should just be the show's tagline. 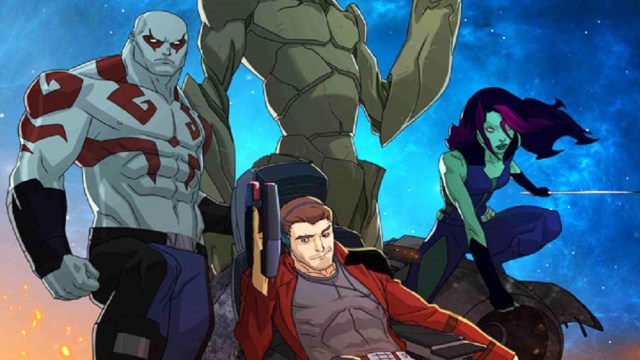 The Guardians of the Galaxy cartoon has already been entertaining us by presenting each of the MCU characters’ origins in animated form, and new teases from the cast and crew sound promising. And not just because “less sex jokes” probably means less sexist jokes. (Probably.)

Though the team behind the show hadn’t even seen the movie when production began, they had read the script, and the series will be allowed to follow the most dysfunctional team in the galaxy on their continuing adventures after the movie’s end credits. Eric Radomski, Marvel’s senior vp and creative director of animation told The Hollywood Reporter, “Peter is interested in where he’s from and what happened. He will continue to pursue that.”

However, we’re unlikely to get a reveal on Star-Lord’s quest to find his father in the cartoon series—not only because Marvel’s going to want to save that for James Gunn’s sequel, but because they might ultimately come to different revelations, and that’d break down the illusion of interconnection between the series and the movies. Radomski added,

They certainly aren’t beholden to what we do. It’s going to go wherever James Gunn decides it’s going to go. Our stories pull from what we’ve learned from the movies and a lot of originality on the part of the writers in terms of creating new adventures with the characters.

So don’t expect this TV version to directly tie into Guardians of the Galaxy Vol. 2.

But the show’s plot will be arresting in its own right according to Will Friedle, voice of the animated Star-Lord, who said, “The stories are so unbelievably intricate.” As for the sense of humor, the other half of Guardians‘ successful formula, while the sex jokes are being toned down, there will be plenty of ’80s references to shoot right over the 7- to 11-year-old target audience’s heads to the delight of the rest of us.