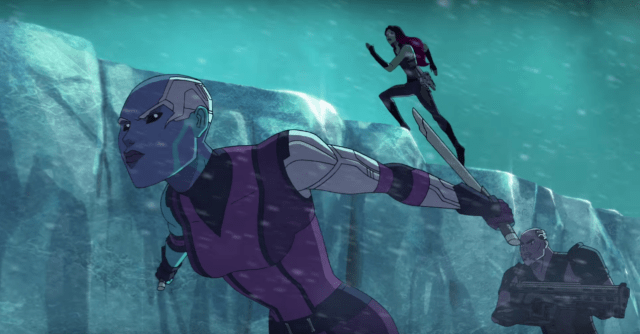 To build some momentum for the upcoming Guardians of the Galaxy animated series, Marvel has been releasing some animated shorts onto YouTube revealing the origins of the entire crew. Thus far, we’ve seen origins for Drax, Groot, Rocket Raccoon, and Star Lord. Now, it’s Gamora’s turn.

In this short, she’s joined by Nebula and Korath as they all compete to hunt down and extract some information from someone hidden inside a temple. The winner becomes Ronan’s second in command. So, this being Nebula, Korath, and Gamora, they spend way more time fighting each other than they do hunting down their mark.

What do you think, folks? Will you be checking out the Guardians of the Galaxy animated series?