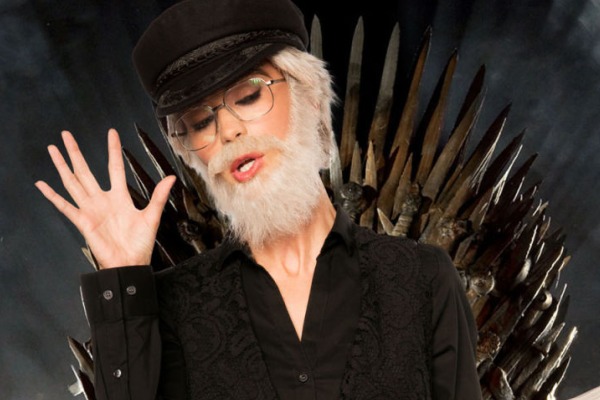 Remember how Playboy made this year’s best “sexy” costumes – including Game of Thrones scribe George R. R. Martin? Well, GRRM himself has seen it, and… is maybe kinda into it?

On his LiveJournal (yep), GRRM had the following to say about the spoopy honor:

I thought it was pretty odd last year, when the GAME OF THRONES – inspired Halloween costumes offered for sale on the internet included not only Jon Snow, Dany, Melisandre, and other characters from the show, but also one based on me. […] “It can’t get any weirder than this,” I thought.

Hoo boy, was I wrong about that.

But the Killer of Faves took it in stride:

I can’t say that I’ve ever had a thing for bearded women, but I have to confess, Sexy George R.R. Martin is… er… sexy. But there is something deeply disturbing about being turned on by yourself. Stranger than incest. Or even twincest.

If you, too, can’t get enough Sexy GRRM, here’s a behind-the-scenes video of the shoot with Pamela Horton (who also dressed up as Bayonetta for Playboy!)