All that critical acclaim is intimidating. 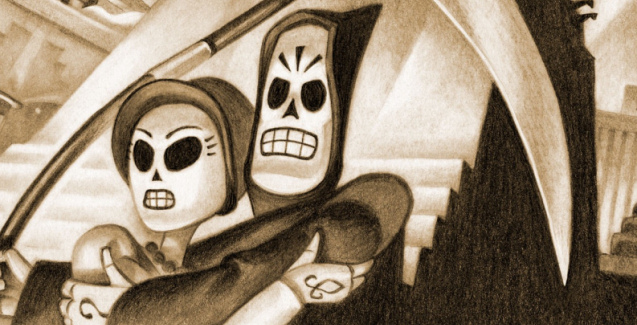 Re-releasing games tends to have little value outside of convenience. Sure, I could have hunted down Kingdom Hearts II and Birth by Sleep and paid for them individually. But that could have been more expensive than opting for Kingdom Hearts HD 2.5 Remix in a single package. I wouldn’t be able to play them on a more recent system, and I wouldn’t own them on one disc.

Grim Fandango is a big exception.

Sixteen years later, and the game by which all adventure games can be judged is finally, officially available once more. It earned no shortage of awards in 1998, but sales were piddling. Eventually, the disc-based game became unplayable (as it happens), and boxed copies became hard to find. Only fans kept it alive in digital form long enough for Double Fine Productions and original director Tim Schafer to remaster it for PlayStation 4, PS Vita, and PC this month (with the help of Sony and Disney, which acquired LucasArts a couple years back).

So as someone who’s never played Grim before but generally likes adventure games (and Tim Schafer’s writing), I was excited to give it a try. Now I’m more nervous, because I didn’t like it as much as everyone else seemed to when it launched.

Grim Fandango was a big deal in adventure gaming. For anyone who doesn’t know, adventure games are usually point-and-click affairs. You click with your mouse somewhere on the screen, and the character goes there. You can click on other characters to talk to them or objects in the environment to look at them or pick them up. People usually enjoy these games because they’re story-driven, quirky, and feature puzzles that are delightfully, hilariously illogical but also frustrating enough that they almost doomed the entire genre.

LucasArts’ Grim Fandango moved away from the point-and-click interface. Instead, players guided hero Manuel Calavera with tank controls (think classic Resident Evil or Tomb Raider). Grim used head-tracking (when the character looks toward points of interest) to tell players when they should examine something in the environment. And in addition to its interface being as minimal as possible, Grim Fandango was also the first LucasArts adventure game to use 3D.

A lot of praise went to its original storytelling, too. It starts in a town called El Marrow. In a blend of Mexican folklore and film noir, Grim Fandango follows “Manny,” salesman and travel agent to the dead. In the Land of the Dead, everyone wakes up a walking, talking skeleton, and the people who lived more moral lives qualify for premium packages that will take them to their final destination faster and in more luxury—as long as they have the cash to cover it. The more clients Manny sells premium packages to, the faster he can vamoose, too.

But the good clients all seem to be going to his rival, Domino, who now occupies the swanky office that Manny once did. When a client named Mercedes “Meche” Colomar never gets her premium ticket and ends up taking the long, dangerous trek through the Petrified Forest and beyond the Sea of Lament because Manny steals her from another salesman, he loses his job and sets out on a quest to find her.

The story spans four years, and each one takes Manny and the other characters to new locales and new phases of their afterlives. And I don’t want to spoil anything, but when he does find Meche, it’s not exactly a happy ending. Points for the damsel not being quite as in distress after all.

Back to me in 2015, with the Remastered edition loaded up on my PS Vita. I like Grim’s story. I find the idea of crime in the afterlife fascinating, because you’re taking all that gold with you for a reason and it’s not always pretty what happens next. I like that the dead can die when they’re “sprouted” and their bodies erupt into flowers and turn to dust, and that the challenges the dead face aren’t all that different than the ones the living do.

I like the characters and the depth of their interactions and dialogue. And how after four years, Manny is still asking his secretary if there are any messages for him, even though she’s not his secretary and he doesn’t have the same job. Because those little details are what make fictional characters seem so real. And there are a lot of them.

I got a kick out of watching an angry-faced skeleton squeak cute balloon animals passive-aggressively at other skeletons and hearing the words “Run you pigeons, it’s Robert Frost!” shouted at birds. And seeing a giant orange demon with razor-sharp teeth named Glottis act giddy about driving a hot rod and drunkenly impassioned over cat races. And authoring a bad poem at a bar called the the Blue Casket, because that was just fun.

I even liked the inventory system, which involves no combining of items whatsoever (hooray for simplicity!) and enables you to collect multiples of an item so you’re more free to use them experimentally. Grim safeguards you against screwing yourself over by using an item where you shouldn’t, all for the purpose of getting a few kicks. Like cramming a loaf of bread down a pneumatic tube. Not that I did that. Just an example.

But I didn’t love Grim Fandango as much as I thought I would. Some of that has to do with it being 16 years later, when 3D games and head-tracking and minimal interfaces aren’t as technologically ground-breaking as they once were. But some of it also has to do with how Grim shows its age.