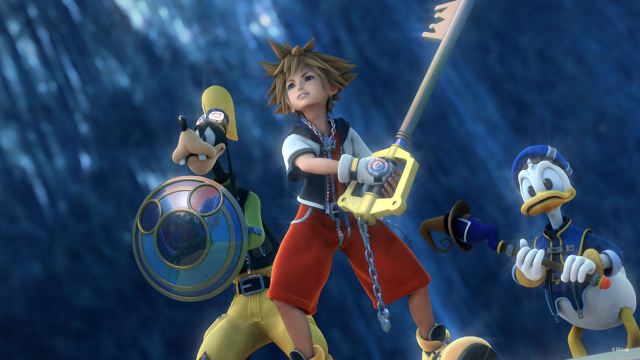 I’ve never understood Kingdom Hearts. Around the time the first one came out, I was playing other role-playing games like Final Fantasy X. For me in my teens, RPGs were my emotional fix, and I bought into every epic cutscene, impossibly cool bad guy, and sappy romance. Kingdom Hearts was definitely on my radar.

But it wasn’t the kind of game I wanted to play (read: it struck me as happy-fun and not moody-emo-bad-ass). Between the ugly full-length zipper jackets and the abundance of Disney characters, I didn’t get it.

Give or take 10 years and here I am, finally succumbing to my curiosity. Square Enix released Kingdom Hearts 2.5 HD Remix this month on PlayStation 3, and I’ve spent more than 30 hours investigating the enhanced sequel, Kingdom Hearts II Final Mix, the main entry in the remastered collection. Does it make any sort of sense to start smack in the middle of a series known for its confusing and convoluted storyline? Hell no! Did I do it anyway? You bet! Kingdom Hearts III is in development, and I want to know what all the fuss is about.

For the first five or so hours of Kingdom Hearts II, that was a pretty stupid idea. 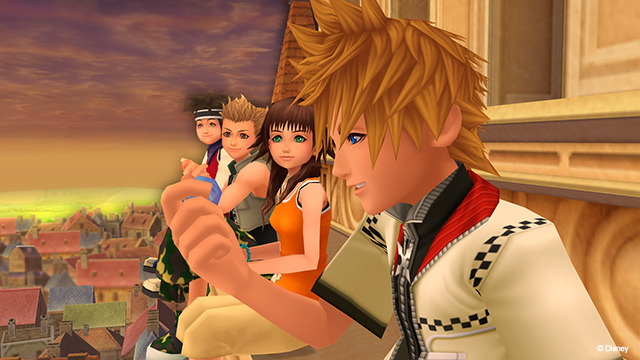 The protagonist, Roxas, whose big shoes and spiky hair confirmed my worst fears about the fashion choices, woke up in the relatively peaceful Twilight Town without a clue as to who he really was. As he regained his memories through weird static television moments and contextless flashbacks, the game tossed around a lot of words and ideas that ceased to be confusing later—in the way that you mindlessly start to accept total insanity when it’s all you have.

I’m not entirely sure I understand what the Heartless, Nobodies, or Dusks are, what the deal is with the Kingdom Hearts everyone’s obsessed with, or whether the meddling Organization XIII take themselves seriously in those black hoods or just have dance parties when no one’s watching. But I got the gist of it. Friendship good; heartless, evil people bad. I’m only slightly less confused than I was at the beginning of this experiment.

Eventually, the story switched over to the main trio: Sora (the main hero, who’s the good side of Roxas, or something), Donald, and Goofy, who are searching for King Mickey and Sora’s old friends. Now, of all the Disney characters, I probably like Donald and Goofy the least, but I grew to love them a little more by the end. Because friendship. Goodness is infectious. And both of them combined are about twice as intelligent as Sora is.

Together, we ventured to different Disney worlds on a Gummi Ship that I’ve come to loathe more than anything ever—if only because the baby-mode rail-shooter segments I was forced to complete to unlock worlds were boring and long, and you can fudge your way through them by making endless loops and barrel-rolling a lot. (My boyfriend informed me they were even worse in the first game, which is frightening.) 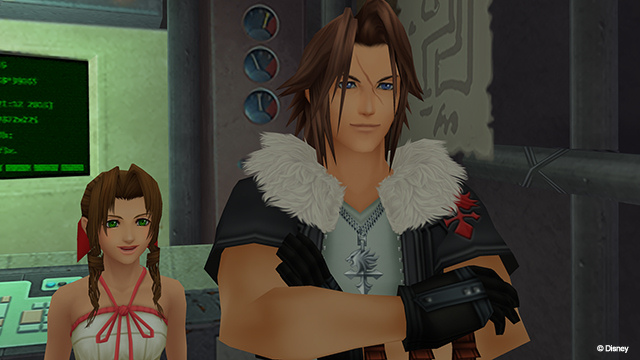 As I was playing, it occurred to me that people probably love Kingdom Hearts for three reasons: 1) You get to explore Disney worlds and hang out with characters like Aladdin, Captain Jack Sparrow, and Hercules. 2) Those Disney characters exist in a universe with Final Fantasy characters like Cloud and Aerith and Sephiroth, and nobody thinks that’s strange at all. Plus, Aerith is alive, if a little vapid. 3) Kingdom Hearts II contains more battles and boss fights than most modern games.

Those same strengths are often its flaws. Meeting (or re-meeting) Disney characters was fun for a while, but some episodes are B-movie replays of some of the most iconic scenes from films like The Lion King or Pirates of the Caribbean. They just don’t carry the same “oomph” as they did in the movies. I enjoyed the new, original stories with these characters much better. It didn’t help my feeling this way after I witnessed Sora, Donald, and Goofy bust in on Mulan’s story and turn it into a bad comedy routine. (I’m still wiping this from my memory.)

I also lost count of how many times the other characters addressed the heroes as “Sora, Donald, Goofy.” Enough to be a good drinking game, for sure. And sometimes this game made me totally want to drink. 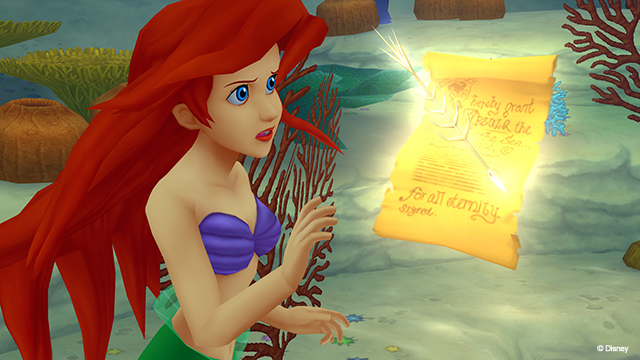 I was surprised by how little presence Final Fantasy characters had in Kingdom Hearts II. My initial impression of the series held up pretty well: It’s Disney meets characters who value friendship (or chaos) and who have bad fashion taste. And it’s just as weird as I imagined.

What I wasn’t expecting was a painful reminder of how far we’ve come with movies like Frozen and Brave. Nearly every female character in Kingdom Hearts II, Disney princess or not, is either a damsel in need of saving, capable only of cheering on the male heroes from afar, or she’s a villain (like Maleficent and Ursula). I grew tired of watching these ladies sit out every adventure.

So I wasn’t too impressed by the Disney stuff. What did win me over was the depth of the gameplay and the structure of moving from world to world. Sure, it would have been nice in the PlayStation 2 era to have a little more detail in the nooks and crannies, but it’s also a rare treat to find a role-playing game today that both provides you with a semblance of choice (which world to visit and in which order) and also contains its storylines and environments to small portions so that you’re not overwhelmed by the directions in which you can go. 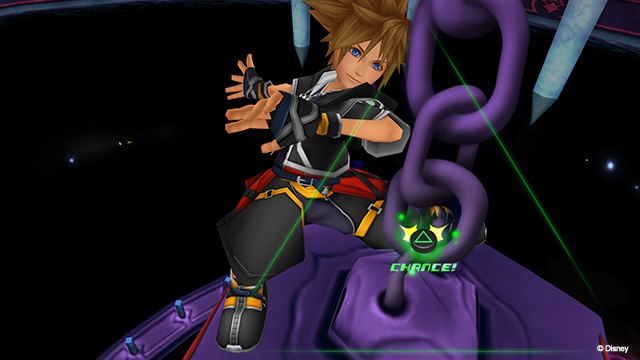 Granted, I felt like Kingdom Heart II’s story was too padded, nonsensical, and disconnected from its bigger narrative—but it’s nice to return to a world, remember the twists and turns of just a few streets and paths, and still discover something new.

The gameplay, which consists of myriad challenges and battles, is welcome in its variety, even if some installments are enjoyable while others are downright frustrating. But the fact that the developers took risk after risk so that the player would never know what they were going to encounter next is a kind of bravery that’s refreshing nowadays.

I raced in Tron’s world, flew on a magic carpet, sang in a few horrible undersea musicals with Ariel and her friends, and saw myself transformed into a lion cub in the Pride Lands. I fought in Struggle tournaments, where I hit my opponents with blow-up lightsabers and made bubbles explode out of them. I battled alongside Auron, one of my favorite Final Fantasy characters of all time. I watched a ridiculously long cutscene of Organization XIII members climbing stairs. And I ate sea salt ice cream with my friends. 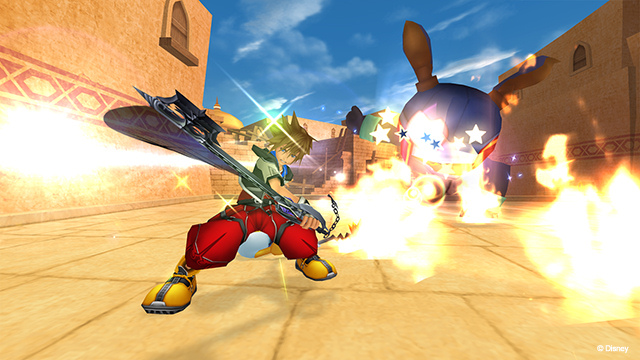 If it sounds ridiculous, it was. It was dopey, insane, and very often irritating. But for how bizarre an adventure it was, I did have some fun along the way: Battles introduce special Reaction Commands that enable you to unleash special counter moves if you press a button at the right time. They’re different with almost every enemy and boss, and I wish more games had them. You get a lot of chances to try them out because Kingdom Hearts sure does love its bosses. There’s no shortage of them in Kingdom Hearts II, as evidenced by this 2 hour and 25 minute video.

Some enemies got on my nerves, and boy, did they ever: The skeletons in Port Royal refused to step in the moonlight so I could do them damage (outside of it, they’re near invincible). The fat bandits in Agrabah who breathe fire made me want to tear my hair out. And don’t talk to me about the cars that run you over in Timeless River. Some battles in this game are stupidly easy; but with others, you earn that slow motion victory pose.

As much as I would like to join the club, I don’t think I can call myself a Kingdom Hearts fan. Am I curious to see what Kingdom Hearts III has in store? Absolutely. If the developers refine the battles even more, streamline the story pieces, and drop the mechanics that don’t work well (random timed minigames, the Gummi Ship), then it could be a really fun game … even if it doesn’t make any sense. 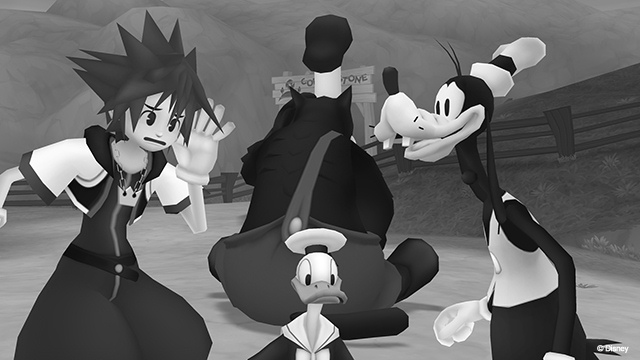 It wasn’t really the dumb story that bugged me about Kingdom Hearts II, or even the Disney characters mingling with everybody else. It was the retreading of stories already told better, the dragging pace of the game, and the tedium of battle grinding. For some, it’s the ultimate fan fiction. For me, it’s shelved.

I’m not as charmed as others are by Kingdom Hearts, but maybe your experience was different. Why do you like or dislike the series? What moment made you love or hate it?