Apple’s Commitment To Renewable Energy Boosts Its Greenpeace Score, But Not By Much 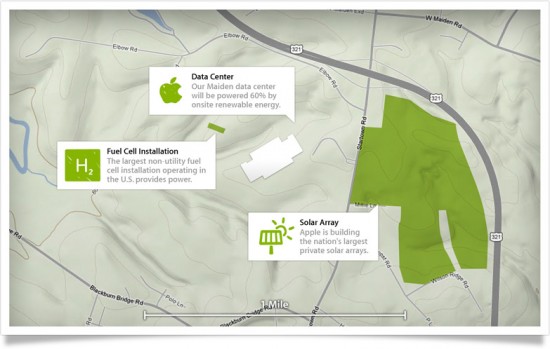 Apple has announced in May that it will have its three data centers be “coal free” by the end of 2013. Greenpeace liked the commitment, so it bumped Apple’s Infrastructure Siting score from an “F” to a “D,” noting that it cannot score Apple higher until it has a long-term infrastructure siting policy in place that will guarantee responsible energy choices in the future.

Greenpeace’s update to their “How Clean Is Your Cloud” report seems cautiously delighted that Apple is finally moving towards powering their iCloud data centers with clean energy. Two out of three of said data centers are located in regions that are 50-60% coal-powered, so Greenpeace’s skepticism is understandably rooted in Apple’s level of commitment. Going “coal free” will require a huge investment on Apple’s part, and Greenpeace is not entirely sure Apple will follow through.

The bulk of Apple’s efforts are focused on its Maiden, North Carolina data center, aiming to produce 60% of its power onsite via two 100-acre solar array installations in and around Maiden, thereby reducing its dependency on the coal-fired Duke Energy power grid. However, Greenpeace notes that Apple also has financial incentives to sell the clean energy they produce back to Duke, as the power company would purchase it at a premium to meet its obligations to produce renewable energy. Of course, given Apple’s recent decision to drop the EPEAT standard for all its future products, we can see where Greenpeace is coming from.

That said, Greenpeace is demanding a lot from Apple. It is not just looking to make Apple’s iCloud service operate on clean energy, but also looking to push electric power companies like Duke Energy toward sustainable sources of energy.

Ultimately, if Apple wants to get serious about its commitment to a coal-free iCloud, the most important thing it can do is to use its buying leverage with Duke Energy and other utilities to push for cleaner electricity options. Currently, Duke Energy’s investment plans call for continued reliance on coal and nuclear power, with less than 4% of the electricity it generates in North Carolina coming from renewable energy by 2030. Apple has the ability to bend that trajectory toward cleaner sources of power.

Smoke and mirrors, demands and promises.