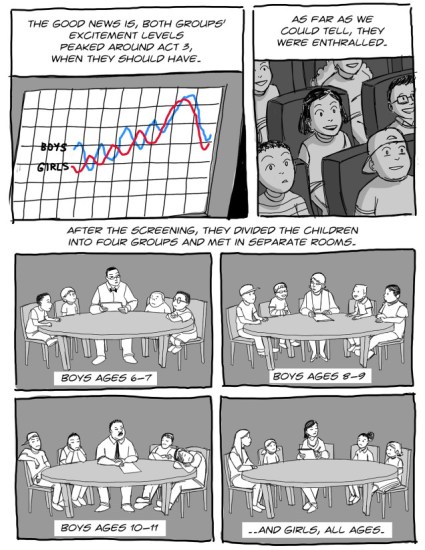 Giancarlo Volpe was one of the producers of Green Lantern: The Animated Series, cancelled after one season due to poor toy sales (which may or may not have been unfortunately fueled by the poor performance of the live action Green Lantern movie) and Cartoon Network’s desire to refocus its DC Comics based offerings into DC Nation despite cult popularity. He posted a comic on his Tumblr recently that sheds light on how television networks evaluate the impact of shows on their audience and distill a crowd of children’s reactions down to several data points for showrunners. In doing so, he joins a current trend of folks on the inside of children’s TV animation talking about the strange, arbitrary decisions of networks, like canceling a show because it is popular with young girls, or deliberately leaving Wonder Woman’s name out of the title of a movie intended to prominently feature her character in particular.

Vople’s full comic reveals a lot of things relevant to our interests. For example, as seen above in one page, the audience for an action cartoon with superheroes in space is already so presumed to be male that the focus testing for Green Lantern: The Animated Series didn’t even separate girls by age group.