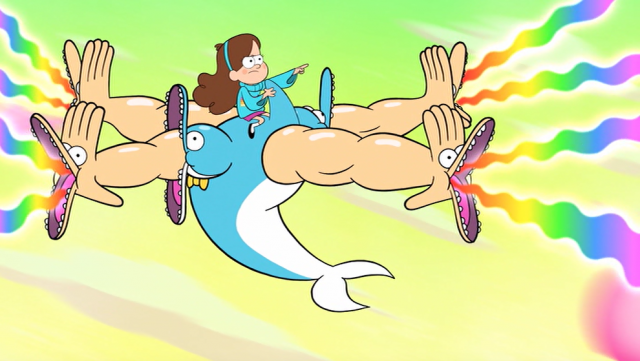 Eager to impress Wendy, Dipper lies about being a teenager and scores an invitation to hang out with her friends. When the group breaks into an abandoned convenience store haunted by teenager-hating ghosts, that white lie turns out to be a potential death sentence.

So, good news/bad news time. The good news is that this is essentially the counterpart in quality to last week’s episode: Gideon’s introduction spotlights character interactions with a sturdy undercurrent of spooky menace, while this week we have a full on terrifying ghost story (this being roughly the time the series all but declared its intent to unseat Courage the Cowardly Dog as “most nightmare inducing American cartoon”) with a few nice character beats around the edges

The bad news is that this episode also introduces the show’s weakest ongoing subplot in the form of Dipper’s crush on Wendy. It’s not a huge problem here, as a one off. It’s not even the worst idea overall. Kids do sometimes get crushes on older-sibling type figures, after all, when they’re stuck in that between-stage of neither kid nor adult. The actual problem is twofold: first, the crush story is pretty much the go-to for episodes in need of some kind of B-plot, to the point where it feels like a bit of a crutch; and, more importantly, because Wendy doesn’t really get to do much in the story beyond serving as The Crush until season 2. Hirsch described the concept of Wendy as the ideal of basically the coolest person the writers could think of. Which is fine as a starting point, but it doesn’t offer a lot of range, and as a result Wendy gets sidelined a lot until the plot figures out what to do with her. I’m happy to report that they do eventually reach that balance, more or less, but getting there can be just a touch agonizing.

This first time though, it works well enough as a reason to spotlight Wendy for the first time and as a reason for the overly cautious Dipper to leap outside of his comfort zone. And once we get to the store and things start going wrong, it’s not just a case of breaking out the creepy imagery. This episode has a really solid concept of how to escalate atmosphere and tension before things go completely off the rails, a skill in simmering that’s often lost on a lot of actual horror films let alone 22 minutes of animation. And it’s doubly impressive that the goofy reveal of Ma and Pa relieves but doesn’t undermine the horror elements that came before it. It’s a clever mix between the Goosebumps school of goofy scares and the Don Bluth philosophy that kids can take just about any level of darkness as long as it has a happy ending.

On the comedy side, Stan’s battle with the TV doesn’t quite count as a full subplot—more a running gag to let the tension in the ghost story rest—but it’s a solid opportunity to show Stan’s emotional range beyond “cheapo conman” even without the kids around. And because “Grampton St. Rumpterfrabble as the irascible coxswain Saunterblugget Hampterfuppinshire” is a grade-A string of nonsense, well worth the price of admission. 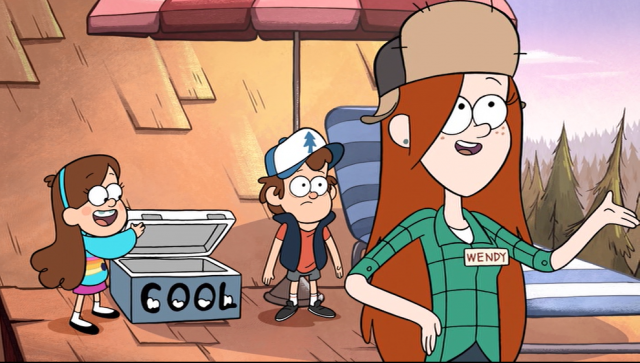 Hey, remember Norman? More importantly, remember the picture in the Journal that caused Dipper to think that Norman was a zombie instead of a bunch of gnomes playing dress up? Thanks to that whole “often mistaken for teenagers” joke and the added element of the hoodie, there was an extremely popular theory for a long time that Robbie would turn out to have been secretly a zombie this whole time.

And since this episode steps up the horror elements, then keeps stepping them up a little more, it seems time to tell y’all a bit about Depravity Falls! Which was more or less the colloquial name for particularly horror-tinted fanworks of the series. Since “disembodied veiny brain and eyeball stalks” made it onto the actual show, I leave you to imagine what sort of content made it into “let’s make a different name for this, so children don’t stumble upon it.”

And adjacent to this phenomenon was a little something known as “Dipper Goes to Taco Bell,” which kinda became the “2 Girls, 1 Cup” of the fandom for a while. It’s not very good, and if you’re an older reader you’d probably know it as that not uncommon bit of trolling known as the “shock fic”—writing that’s deliberately stilted and focused on as much viscera and general gross out content as possible. Spoilers: tacos are people, but not until a lot of bleeding and diarrhea are involved first. Ah, every generation needs to rediscover these things for themselves, I suppose. 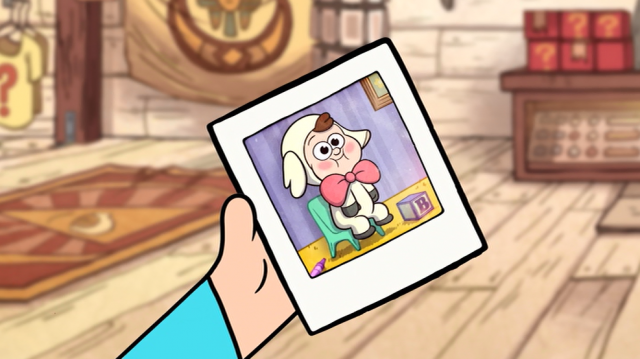 So. Apparently the Lamby-Lamby dance is ripped from the real life experience of this episode’s co-writer, Michael Rianda. And…

I’VE GOT NOTHING TO WORK WITH ON THIS ONE, HAVE SOME HORRIFYING NIGHTMARE FUEL. 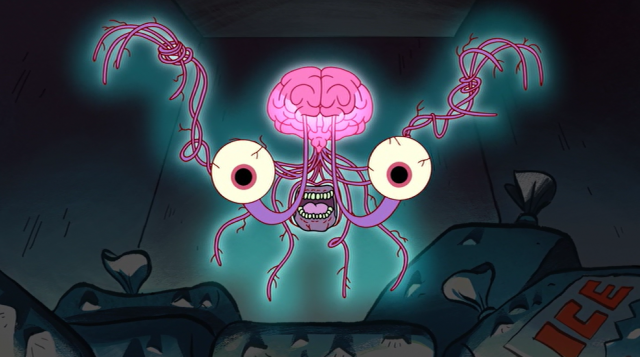 While they aren’t exactly huge tells, this was the episode with the first association between Wendy and the ice bags (a major touchstone for all those Bill’s Wheel theorists right up to the finale) as well as the Smile Dip hallucinations, which would form the aesthetic baseline for Mabel Land in the finale.

Actually y’know what, let’s talk about that for a minute. Hirsch has talked before about the fact that Dipper’s struggle is wanting to grow up too fast, while Mabel is afraid that adulthood will mean an end to what she holds dear. This episode is one of the first indicators of that tension, with Dipper lying about his age and the fact that the plot hinges on that technicality of teen/not teen, as well as the broader sense of puberty of what it means to feel like you’re getting older while still being seen as a child. But, like Mabel escaping into her fantasies later on, he’s avoiding reality. He has to accept where he is in life—and in doing so there are benefits as well as drawbacks (and it helps that this episode is chock full of sibling moments that feel very true to life). And having that strong visual aesthetic tie both twins’ moments of delusion together is some really excellent visual design.

This is also the first usage of the “lip zip” inside joke between Dipper and Wendy, which will be crucial to the plot by the time “Into the Bunker” rolls around (and, thank all that is good, puts down this whole crush arc and gives Wendy something else to do in the plot). It’s an interesting gesture, thematically speaking: a great deal in the series is made about how secrets are often made with the idea that they’re “protecting” another person (Ford and the Rift, Stan and the Portal), only for it to turn out that things would’ve gone a lot better with a little more honesty. But Wendy and Dipper have secrets based on trust—if Stan hiding things from the kids makes him a Them versus their Us, Wendy and Dipper are an Us with the world as a Them. This idea doesn’t come up as often in the series as the “secrets break down bonds” idea, but it is an interesting secondary element that sometimes works for and sometimes against the series. We’ll come back to it down the line.

Vrai is a queer author and pop culture blogger; they would give a great deal of money to see Hirsch make a horror movie. You can read more essays and find out about their fiction at Fashionable Tinfoil Accessories, support their work via Patreon or PayPal, or remind them of the existence of Tweets.