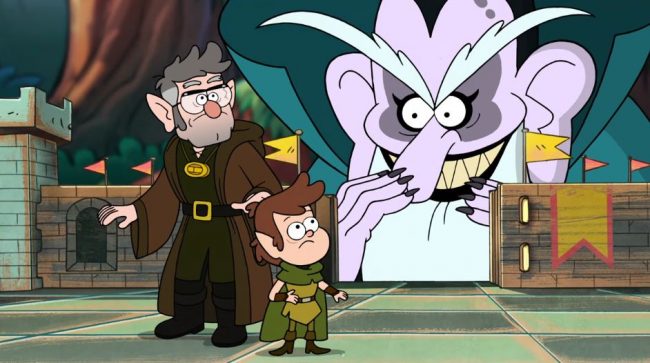 Dipper bonds with Ford over their mutual favorite game, Dungeons, Dungeons, and More Dungeons. When Ford’s infinity-sided die brings the game’s antagonist to life, Stan and Mabel have to team up to save their nerdy twins’ brains from being eaten.

While its concept is a bit of a foregone conclusion on paper–we need Ford and Dipper to bond and to see the generational similarities between the twin sets, which is quite expected but still needs to be shown for the arc to work–it manages to be quite pleasant in its execution. In particular, this is probably the show’s best use of Grenda, as playing her off of Stan even briefly leads to absolute comedy gold.

It also benefits from the inclusion of Weird Al Yankovic, though it can’t quite claim the title of “best Weird Al performance in a Disney show that aired in August 2015.” That honor goes quite cleanly to Wander Over Yonder. Yankovic doesn’t have much to work with as Prababilitor, but his timing carries his scenes and works well as an antagonist for the Pines family to bounce off.

Points are worth awarding, though, for the script’s handling of the ancient “D&D is for nerds” joke, which is simply no longer applicable in the current climate (shows like The Adventure Zone and Friends at the Table were already well on their way even back in 2015). Choosing to focus instead on the fact that there are multiple ways to enjoy a tabletop game that aren’t so focused on exacting rules and numbers taps into exactly what’s helped a whole new swath of people find tabletop games as a genre, and it plays to both Mabel and Stan’s strengths without seeming forced.

Likewise, the subplot that mocking someone for their interests, even if you don’t share them, is handled without feeling too heavy-handed. The parallel of handing down bad habits from the older Pines to the younger (Stan’s tendency to mock things he feels excluded or intimidated by, Ford’s exceptionalism and self-isolating) is impressively subtle. 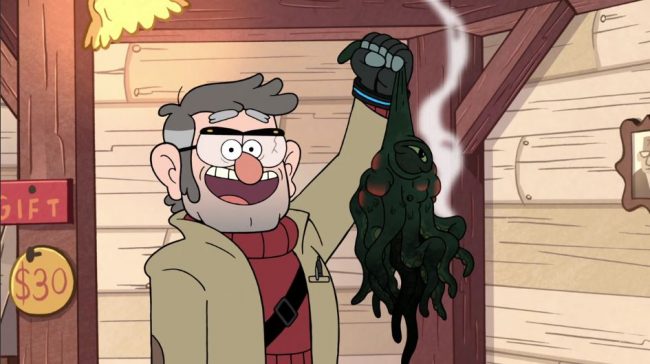 “Is Ford evil?” Just about everyone and their dog had an opinion on that one from the moment Ford popped out of the portal in an all-black ensemble a Sith would’ve envied. Now, I mentioned in a previous post that the idea of “Dark Dipper” was a very popular one post-“Sock Opera,” but I wanted to touch back on this issue again here.

As I said when discussing Dipper, the GF fandom is one trained to look for clues and ciphers, bits of data that could be decoded and reveal new bits of concrete information. That mindset was then applied to the characters and didn’t really work out, likewise, the same search that revealed Ford’s existence doesn’t really work when trying to suss out his role in the narrative.

The story does indeed play Ford, on the surface, in the role of the Wise Narrator, something Dipper is more than happy to buy into until almost the end of the summer. And Ford, getting to live out the dream he’s probably had since he was a kid, is more than happy to buy into his own hype without any kind of realization that he should in no way be asking this kid to keep secrets or cut himself off from the family. That’s creepy. And plenty of narratives would play that straight, following the lead on the protagonist finally getting to be recognized for his hard work, etc. etc. exceptionalism. The critical component comes in tone and direction. The fact that Dipper believes Ford hung the moon doesn’t necessarily mean the show overall believes it, a dichotomy that becomes more and more clear as the episodes go on (we’ll come back to discussing Ford’s character in that light later).

That issue of narrative direction vs character logic isn’t just a stumbling block for this particular fandom, but it does continue to be an issue as pop analysis of a show’s internal logic carries on without the skills to also analyze how a narrative is structured. Which is a long way of saying, “my eyeballs eventually dropped out of my head at all of the Worst Monster vs Cinnamon Roll Ford discourse.” 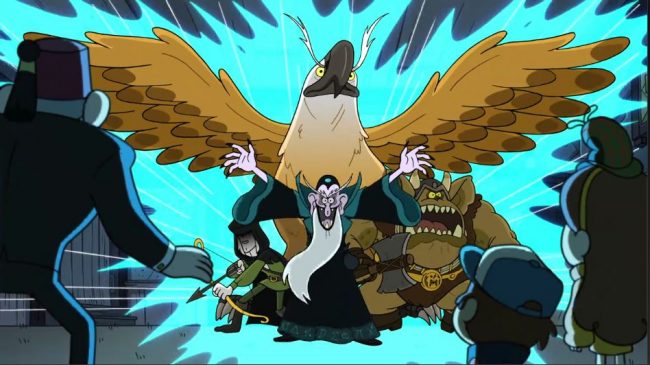 PAGE CIPHER: Fun And Games Are Great Distractions, But Small Things Can Have Chain Reactions

Aside of some foreshadowing regarding Ford’s connection to Bill, not a whole lot to remark on in the hidden secrets department on this one. 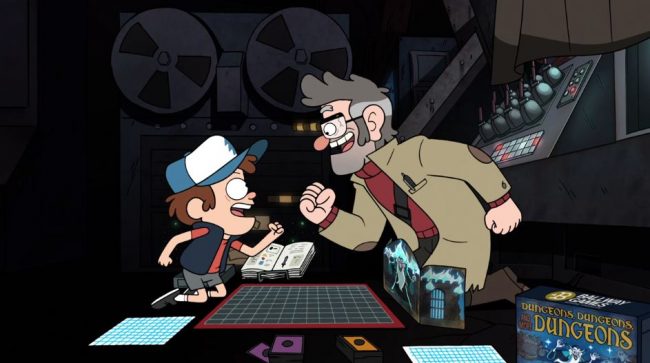 Y’all, I’m gonna tip my hand right now: Ford might be my favorite character, discounting the sheer id-like delight of every second Bill Cipher has ever been on screen. Also? He’s a total dick, which nothing drives home faster than flipping open a copy of Journal 3. Whatever can be logically attributed to his own regrets and resentments after spending 30 years in various hell dimensions, there’s really no likable out for him referring to Stan’s run-ins with the law as “a logical progression from his days in the principal’s office”).

Essentially, Ford spends the first days (weeks?) after his return steadily breathing in his own fumes and doubling down on feeling like the wounded party in Stan’s efforts to get him back (his only acknowledgement of Stan singlehandedly getting the portal running again, without a degree or any help, is to say that it looks like a monkey did it; again, Ford is a diiiiiiiiiiiiiiick). He’s lonely and clearly wants to make good, but has just enough legit grievances and more than enough pride that he refuses to actually make the step to meeting halfway – a trait that goes on to bite everyone come the finale.

As far as his relationship to Dipper, Ford’s total isolation seems to have left him totally unequipped for how to deal with kids. Namely, that you shouldn’t tell them to keep secrets from their other loved ones, a trick well-loved by insidiously abusive figures everywhere. While that’s clearly not Ford’s intention, at least not a malicious one, he’s so married to the idea of being a Brave Explorer Making it On His Own that he refuses to acknowledge the need for bonds. He wants to share his worries with someone and feels like Dipper is a kindred spirit, but doesn’t seem to grasp that Dipper is also twelve and should not be treated as a fellow adult (see: Ford’s one (1) other friend, a relationship he also tanked by not considering that the other person’s brain doesn’t operate exactly like his).

In trying to impart all the truly great learning he uncovered as a researcher, Ford also winds up well on his way to passing all of his deeply troubling character flaws to the next generation. Fortunately for everyone involved, both the narrative and the characters eventually realize what a very, very bad idea this is.

Vrai Kaiser is a queer author and pop culture blogger; they’re kind of dreading the next one of these. You can read more essays and find out about their fiction at Fashionable Tinfoil Accessories, listen to them podcasting on Soundcloud, support their work via Patreon or PayPal, or remind them of the existence of Tweets.