If you follow the British press much, you’ve no doubt heard of Raoul Moat, a man from Rothbury, Northumberland who shot three people, killing one, and was on the run from the police for six days before a standoff with the police in which Moat shot and killed himself. Grisly stuff.

In the wake of the Moat saga, British tabloid The Daily Star made the inevitable outraged connection between real-life violence and video game violence. What made this unusual was that rather than claiming that video games had inspired the tragic acts in real life, The Daily Star asserted that the next Grand Theft Auto game would be based on the killer, causing “fury” to erupt last night. This would indeed be furiously eruptive, except for the fact that it’s totally made up.

If you look at the cover art touted by the Star as circulating on “gaming websites,” it’s pretty clear that it’s a half-assed Photoshop: Just look at the aliasing, the lack of a Rockstar logo, and the mixing of real-life and game images. RPS reckons it’s probably B3ta or 4chan, though my money’s on the more UK-slanted B3ta. (I couldn’t find this particular Shoop there or anywhere, but this has a similar flavor.)

Most outrageously, the tabloid appears to have contacted the 69-year-old grandmother of one of the shooting victim about the fictitious game: They quote her as saying “I can’t believe someone wants to make money out of people who have been killed. It is sick — it’s blood money. The game is beyond belief.”

The Daily Star eventually pulled the article (here’s the dead link) but not before MCV managed to grab an incriminating screenshot of the article from their website: 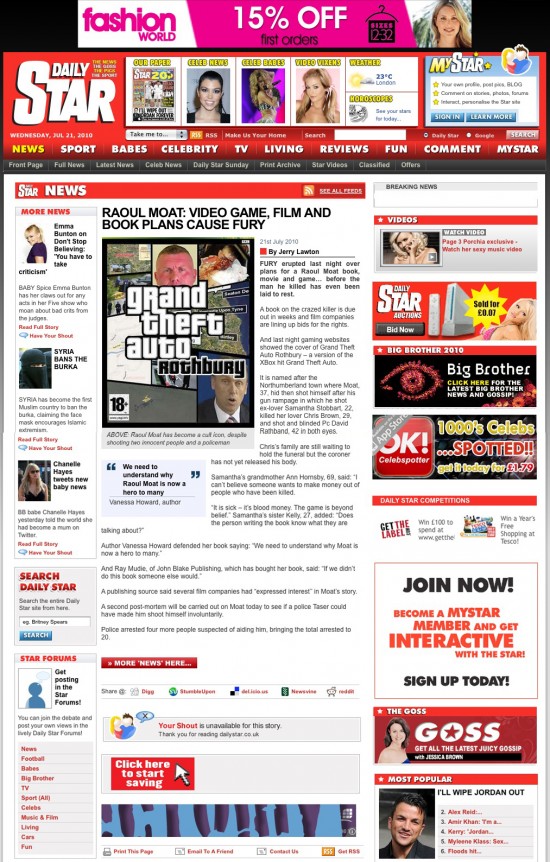