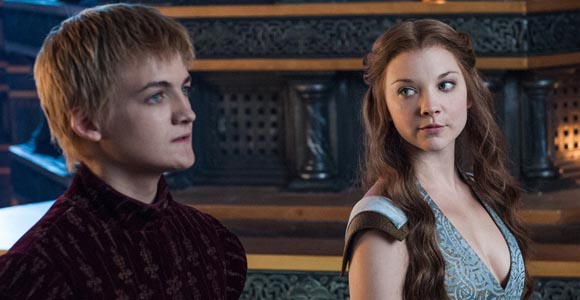 We’re basically in a holding pattern for HBO’s Game of Thrones Season 4. Most of the casting news is out of the way and the actors and crew are currently filming. So what’s a fan to do? Listen to George R.R. Martin tease upcoming events and search out Stevie Nicks’ Game of Thrones fanfic.

Ok, so technically they’re poems but come on, writing poems about fictional characters = fanfic, right? Anyway, the songwriter was recently interviewed by Scotland’s The Herald and discussed her love for the hit show, which she says got her through a difficult time recently.

“The author is my age and it blows my mind that he’s able to create this vast, interlinked world. As a songwriter I write little movies. But I can’t imagine sitting down and writing even one small book,” she said. “But then probably somebody like him couldn’t imagine writing ‘Edge Of Seventeen’ or ‘Rhiannon’ – couldn’t write a whole little life in two verses and a chorus.”

Nicks also mentioned she would love to write some music for the series. I wonder if she knows that’s a possibility considering the modern acts we’ve seen involved in the past. But the great part of the interview was finding out just how deep her fandom goes. She said, “I’ve written a bunch of poetry about it – one for each of the characters. On Jon Snow… On Arya… On Cersei and Jaime.”

I need to read those.

Meanwhile, Martin is busy giggling to himself every time he has to do an interview (or so I would imagine). Fans of the show and book alike know there’s some more nuptials on the way, namely the marriage of King Joffrey Baratheon and Margaery Tyrell. And you’ll probably remember the last on-screen marriage didn’t go so well. So what did the writer tell TV Guide about the next important day?

“It’s going to be the wedding of the year, and as memorable in its own way as our wedding last season. It’s what the fans call the Purple Wedding, based on the color of the wine, which plays a big part,” he said, adding that they scenes themselves look spectacular. “The bride’s dress incorporates roses, there are 77 courses at the dinner feast, and there’s some wonderful halftime entertainment.”

(via TV Guide, The Herald)