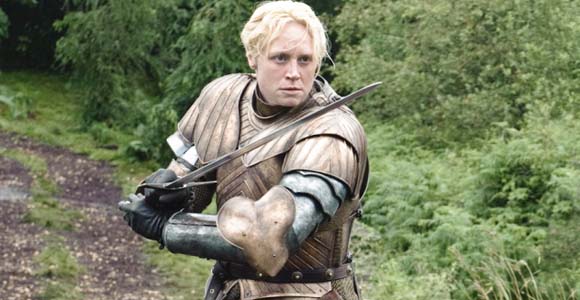 We’ve a week and a half to go until season four of Game of Thrones premieres, and you know what that means: The press junket is in full force. We’ve combed through the bajillion cast interviews floating around to provide you with the tastiest morsels. Behind the jump: Gwendoline Christie on Brienne and femininity, Sophie Turner on Game of Thrones‘s female characters, Kit Harginton and Jon Snow chiming in on the show’s nudity, and more.

I swear to God, every time Gwendoline Christie, who plays Brienne, opens her mouth, puppies and rainbows fly out. Armor-wearing puppies. In an interview with Hero Complex (I recommend reading the whole thing) she talked about a favorite Brienne-related subject of hers: How playing Westeros’ resident lady knight helped the actress come to terms with her own femininity.

“In Series 2 we see this very big woman in armor with these male affectations, trying to be a knight, being a lady knight, and being mocked because of the way that she looks… For me, what I’ve seen in the writing throughout the series is the unfurling of this woman’s personality, of this woman’s understanding and search of what it is to be a woman, and that strength doesn’t have to come from acting like a man. And when I read it, what it reinforced to me is that beauty is not about the way in which we’re born and conforming to traditional archetypes, it’s about the choices that we make.”

Femininity not fitting into a box is a theme that’s borne up in the first episode of season four, where according to an interview with Christie at TVLine Brienne gains a new member for her fan club: [Vague spoiler about a character interaction] Olenna Tyrell. “Reading the script, it’s so cleverly written that when I was reading it, it was a surprise to me that Olenna would change and have that opinion,” explains Christie. “But then, as ever, it makes total sense that she should be so embracing of a woman of power, as she is herself, albeit of an entirely different form.”

Sophie Turner, who plays Sansa Stark, also chimed in on the subject of Game of Thrones‘s female characters, remarking on Today that “the great thing about the writing is that they’ve written these [female] characters that you don’t really get to see — that you haven’t seen before — because they’re so strong, and probably the strongest characters in the show.”

Christie also discusses how Brienne, more than most other characters on the show, is driven by a sense of “moral good,” which she’s had to reexamine as the story goes on. What does that mean for season four? “Brienne is journeying on,” Christie says,

“and we see different aspects of her character flowering, and we see her having to use different parts of herself to survive in different worlds that she has no experience of, and we see her undergoing some of the worst hardship that we have seen. The first three seasons of Game of Thrones structurally have taken a very similar path in that it starts as a slow build, and then there’s a climax. And Season 4 takes a very different path, and I think it genuinely is going to blow people’s minds.”

While Brienne’s set to have a tough time of things in season four, there’s one female character who’s riding a bit of a high: Melisandre (Carice van Houten), fire enthusiast and resident priestess for Team Dragonstone. “I like to approach the heavier scenes in a light way,” she explains to Indiewire. “Any moment I can feel there is irony, I will take it. In this coming season, Melisandre’s telling a joke. I love that. I really enjoy the more human side of Melisandre… there will be scenes where you see her in her natural environment. You see her take a bath, talking, having dinner — more normal stuff.” Hmm. I wonder what the joke is.

I’ll be very disappointed if it doesn’t turn out like that.

Van Houten, who previously stated her support of more gender-balanced nudity on Game of Thrones, expanded on the issue of the show’s oft-criticized abundance of female nudity, saying: “I know sex sells and people watch it because it’s new, but it also makes the show more real. If it becomes sexist, then it’s wrong, but I think so far it hasn’t been… We can get away with it [female nudity], I think, because there are so many great, powerful women on the show. If it were only men, and women were just sitting at home, then it’d be different. But since the strongest characters are women on the show, there’s a better balance.”

Also chiming on the issue of nudity, specifically dude-ity (male nudity—c’mon, guys, keep up) is Kit Harington, who argued in an interview with GQ that “It’s only right, if you’re going to make a show where nudity and sex is a large part of it, that you be a part of that.” Peter Dinklage also offered his, um, self, saying an interview with Entertainment Weekly that “I haven’t read a script yet where it is [a nude scene for Tyrion]. But if it’s appropriate for the material, I will definitely go to the gym.” Dinklage also notes that Tyrion’s season four plotline “sticks[s] fairly closely” to the books. “You see that some people rely on drunk, funny Tyrion. I think funny and drunk lasts only so long. He sobers up in many ways.”

That’s it for this Game of Thrones roundup! Check back for more tidbits as we get closer to the premiere and for recaps once the show starts. If you’re a reader who neither watches nor cares about Game of Thrones, like our own Susana, I feel a little sorry for the number of links you’ll have to skip.

Previously in Game of Thrones Season 4