"And lo, Jesus was too busy making metaphors for strangers to remember my birthday." 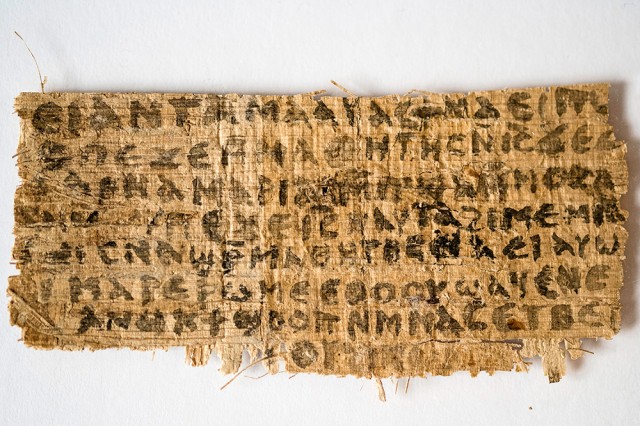 “The Gospel of Jesus’ Wife” is a fragment of papyrus that contains controversial statements about—you guessed it— Jesus’ wife. It says things like, “Jesus said to them, My wife… she is able to be my disciple…” and probably a lot about how he’s always out boozing it up on water-wine with his 12 buddies.

It’s been debated whether or not the papyrus was an authentic piece of history ever since knowledge of the writing was announced in 2012. Now, reports from the Harvard Theological Review state that they have been able to verify that the piece of papyrus dates to around the eighth century—about the age of a previously known Gospel of John papyrus from antiquity.

They also concluded that the ink showed no signs of being modern, but some skepticism remains from those who don’t want to accept it as gospel (yuk yuk). Dr. Depuydt, an Egyptologist from Brown University, cites the document’s “gross grammatical errors” and the fact that, “An undergraduate student with one semester of Coptic can make a reed pen and start drawing lines.”

While that may be true, the team of chemists inspecting the papyrus, led by MIT’s Joseph Azzarelli, are confident that they’ve accurately dated the scrap. Beyond that, they found no evidence that the ink was applied in modern times, which would’ve resulted in ink pooling in damaged areas. They also didn’t see any evidence to support the theory that a modern forger had made it say “wife” instead of just “woman.”

Whether it’s an accurate historical account will likely be debated forever, but the research team is confident that it is definitely a really old thing that someone wrote about Jesus. So, feel free to pick and choose whether or not to take this one literally, too.