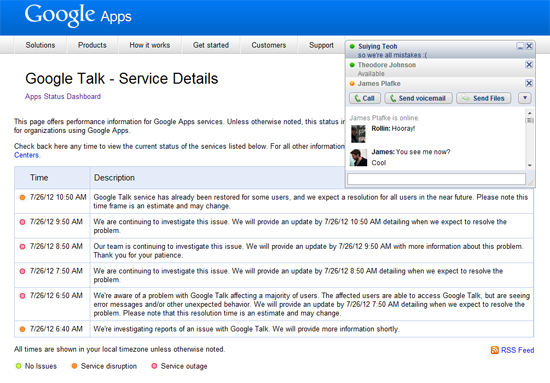 Google Talk has been having issues all of this morning for the majority of users. The application’s status dashboard notes a disruption starting at 6:40 AM EST leading to an outage of around four hours. As of this writing, some users are able to reconnect, but many more remain without the ability to use their preferred instant message client in what will surely become a popular “first world problem” around the web.

The most recent update notes that the team is working on a fix and has already restored service to many users. They go so far as to say that all users should have service restored in the “near future,” but then hedged that by reminding folks that it is an estimated time frame that’s subject to change. “Near future” isn’t exactly a definite amount of time unless you’re comparing it to something like “far future” or “somewhat close but kind of still far future.” Whatever you say, Google, we’ll keep our fingers crossed.

For the time being, users can test their connection the old-fashioned way: Logging on and trying to send a message. If that doesn’t work, folks might have to resort to either actually talking to each other or using other clients. The downtime, of course, occurs on a day when Google is looking to announce something big about their broadband offerings. Oops.

UPDATE: As of 11:25 AM EST, Google is saying that all issues should be resolved. The exact cause has yet to be released. Original report remains unchanged above.