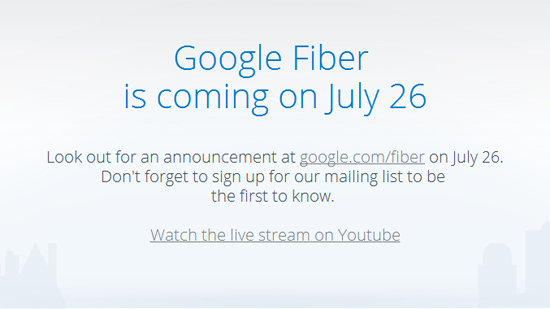 Today is Rex Manning day! Okay, maybe not, but it is July 26th and it looks like Google Fiber is going to make some kind of big announcement. You may remember Google Fiber from such films as, well, no films — but they are bringing incredibly fast Internet connections to at least one city: Kansas City. After much fanfare, it seems that perhaps today is the day that they’re going to announce that the city’s connection is ready to go.

Google Fiber is an effort by the eponymous company to provide what they refer to as “ultra high-speed Internet” to communities that need it most. Utilizing equipment aggregation huts and lots and lots of fiber optic cable, the intention is to effectively mainline the Internet for users. With the system in place, the distance between someone’s home and the tubes that compose the Internet will be much shorter and offer tremendous speed.

Seems like a whole lot of effort just to announce that the thing they announced ages ago can now officially be announced as active. It is the first city to be chosen for the overhaul though, so it’s hard to say.