BigDog Robot Gets an Arm, Throws Cinder Blocks in Video | The Mary Sue

DARPA’s BigDog Gets a New Arm, Can Now Toss Around Cinder Blocks [Video] 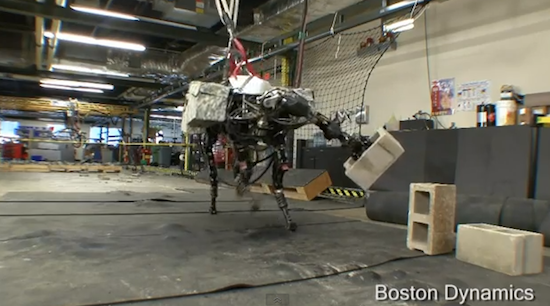 We’re unabashed fans of DARPA’s BigDog robot and its kin, AlphaDog and LittleDog, but that doesn’t mean we’re always totally comfortable with them. Take for example BigDog’s new hand — which is actually where the mouth would be on a real dog — that lets it toss pieces of concrete around without a care in the world. Since the robot is designed mainly as an electronic beast of burden designed to help carry the load for soldiers in the field, it makes sense that it’s finally got a robotic hand that it can use to grab and manipulate objects. As you can see in the video below, it can also use that hand to chuck cinder blocks a pretty respectable distance.

Now while throwing rocks — even if you’re doing it with a robot — isn’t exactly modern warfare, I still wouldn’t want to be in the room when BigDog starts feeling playful. I’ve gotten this far in my life without participating in a round of cinder block dodgeball, and it’s a streak I’m eager to continue.