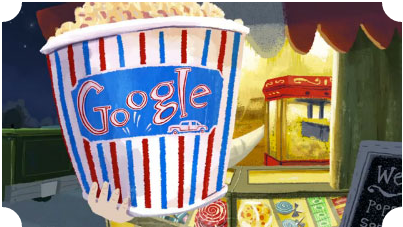 Like a particularly perceptive alien species, Google has gone from observing human behavior to predicting it, with a new study, Quantifying Movie Magic With Google Search.  The study suggests that, with Google searches for movies on the rise (up 56% despite a 9% decline in the overall number of movies out in from 2011 to 2012) Google has the data to predict, even with 94% accuracy, how much a movie will gross at the box office.  The calculations are based on a number of types of searches, from trailers to reviews to the number of queries on a specific movie leading up to its release.  This study could show companies what to do to keep their movies in our minds before and during opening week, and is also quite a significant indicator of how much we rely on Google for our entertainment choices.

According to the study, Google can use different types of searches to predict movie success.  Query volume for a specific movie can be taken into consideration, for instance, to arrive at a 90% to 92% accurate prediction of how much money a film will make.  Meanwhile, trailer search volume can predict box office success of a film on opening weekend with up to 94% accuracy, if the season and the franchise of the movie are taken into account.  Interestingly, the trailer calculation is most accurate when data from four weeks before the film’s release is used, suggesting that anticipation for a movie is just as important as the snap judgement of what to see.

On conducting the study, Google had this to say:

“The quest to quantify movie magic is certainly not a new concept.  Pre-release tracking has been around for decades, however, traditional approaches have recently come under scrutiny.  With the increasing amount of information and media influences available, there are more factors that should be considered. “

Perhaps the most interesting part of Quantifying Movie Magic With Google Search is that it suggests itself as a new tool for understanding movie-goers, stating:

“Since 48% of moviegoers decide what film to watch the day they purchase their ticket, it’s important to have a continued search presence through opening weekend and beyond.”

Obviously, the film in question’s notability or connection to a franchise is a big part of it’s google search results.  This study takes that information, and gives us a new perspective on it.  Our googling habits could give Google and Hollywood a new way of predicting and understanding what we want to watch.  On the other hand, this study could just mean more sequels, given that franchise and season play into the results.  I personally would be interested to see the system implemented and tested, and to compare the predictions to preliminary reviews of the films tested.  It’s also quite interesting to note that Google found that most moviegoers make their viewing judgement the day of, since we’ve seen so many preordering, mid-night premier movies, from Harry Potter to The Hunger Games, in some of the most talked about movies of the past couple of years.  I wonder how The Internship shapes up against Google’s prediction system?