Google Amps Up Built-In Calculator, Now Voice-Enabled and Has Buttons 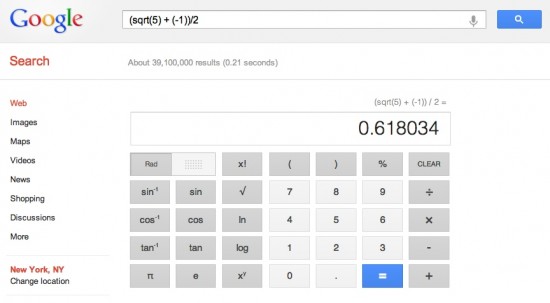 Google updated their little built-in calculator, turning it into a 34-button voice-enabled scientific calculator. We’re loving the change, but since Google wants to make a proper calculator, we think it could do better.

Google already has a calculator built inside its search. In addition to returning results matching the keywords for searches like “3+5,” Google also prominently displays the result of the equation at the top of the page, making it the best for quick, simple calculations. The new and improved calculator looks and works much like a proper scientific calculator, and more excitingly, works with mobile browsers and Desktop Voice Search.

For one, I’d like to be able to type in the display itself. The buttons are very useful for scientific functions, but it really is easier to type then to click the numbers one by one. Right now, I either have to click everything out, or type everything out in the search bar. There is no way to click “sin−1” and then type “0.555,” which is probably the quickest way to do it.

I’d also like to be able to see previous equations. Sometimes it’s easier to just do parts of an equation and add it all up later instead of constructing a labyrinth of parentheses to make sure things get computed in order. Displaying a history of calculations will make this so much easier and quicker, not to mention less annoying.