Google Opens the Floodgates of Human Input with Editors’ Picks 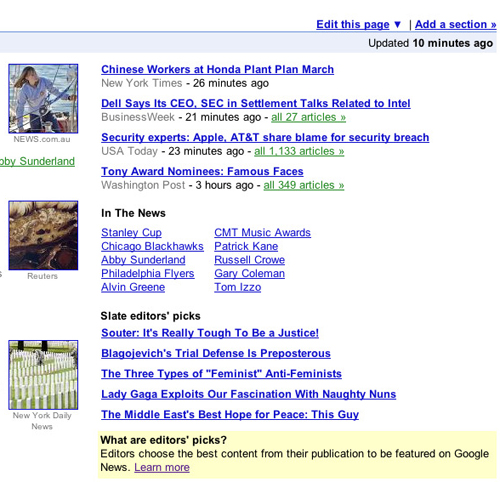 A small percentage of those of you searching Google may come across a new feature with a mysterious name: Editors’ Picks. But wait? Google’s run by computers and robots, right? Or at the very least the organization has been commited to providing its user with an unbiased, computer-driven search algorithm. At launch, every Google page proudly displayed this message: “This page was generated entirely by computer algorithms without human editors. No humans were harmed or even used in the creation of this page.” Well, apparently it’s time to give searchers the option of widening their horizons, seeing what actual editors, who are (usually) human beings and not computers, think people should be reading.

But really, this was almost inevitable. Google experiments more than a college student who had an overly sheltered home life in high school, as confirmed by the organization’s official release on the new feature:

“At Google, we run anywhere from 50 to 200 experiments at any given time on our websites all over the world. Right now, we are running a very small experiment in Google News called Editors’ Picks. For this limited test, we’re allowing a small set of publishers to promote their original news articles through the Editors’ Picks section.”

Editors’ Picks give the editors responsible for choosing the content from their respective publication complete autonomy over the content they choose. They can post the quirky stories that searches are less likely to find, or the big news that everyone is reading and you should too. The links are not “sponsored” in any way, and the publishers are not paying for this service.

This isn’t the first time a site has decided that maybe a little human input could spruce things up a little. Right now there are very few publications involved and very few users who will actually see the Editors’ Picks box, so it’s still very much experimental. Google is working to improve its whole system, and a lot of that is news-centric. With Editors’ Picks, Google is taking a big leap of faith from its original mission, but it’s one that could pay off well, assuming those pesky editors make the right picks.

(Via Nieman via Poynter)