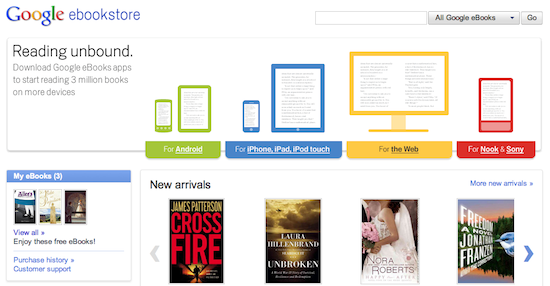 What sets Google eBooks apart from competitors like Amazon and Barnes & Noble is Google’s eBooks take a universal approach to accessibility, with their eBooks being readable on nearly any device that contains a web browser, whereas, for instance, Amazon eBooks are generally best viewed with their own eBook device, the Kindle.

At the moment, users can read eBooks via Google’s Web Reader, as well as on iPhone, iPad and Android apps. The eBooks will sync across platforms as well, allowing a user, for example, to start reading an eBook on their computer at home, then pick up where they left off on their iPad.

Check out the service over at Google eBooks.