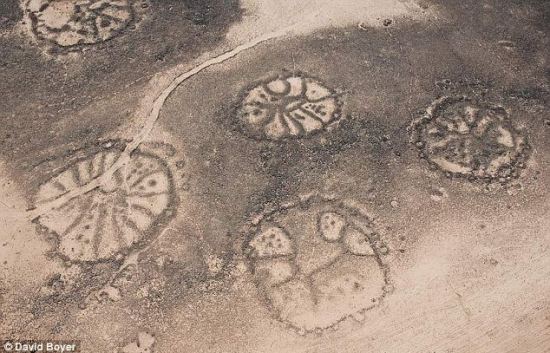 Using Google Earth, David Kennedy, professor of ancient history at the University of Western Australia, discovered Nazca Line-like structures sitting in the Arabian peninsula. The ruins, first seen from the air by British Loyal Air Force lieutenant Percy Maitland in 1927, have not been fully exposed on film until now, due to various countries in the Middle East not proving aerial photography or flights for archaeological research. So, of course, some guy using Google Earth is the next best thing. The structures discovered vaguely resemble wheels, circular with lines similar to spokes leading out from a central point within the circle to the outer edges, with the circles measuring anywhere from 20 to 70 meters across. Kennedy notes that similar structures over 9,000 years old can be found in Yemen, about 7,000 years older than the roughly 2,000-year-old Arabian wheel-like structures.

The wheels are often found in lava fields, though according to Kennedy, do not fall into any sort of pattern; for instance, they don’t align with anything astronomically relevant. Along with the wheel-like structures, Kennedy has also found many “kites,” which are structures that have a somewhat circular top with a tail that extends for hundreds of meters, though to be animal traps.