Google Announces Chromecast, Lets You Stream to Any HDTV With $35 Dongle 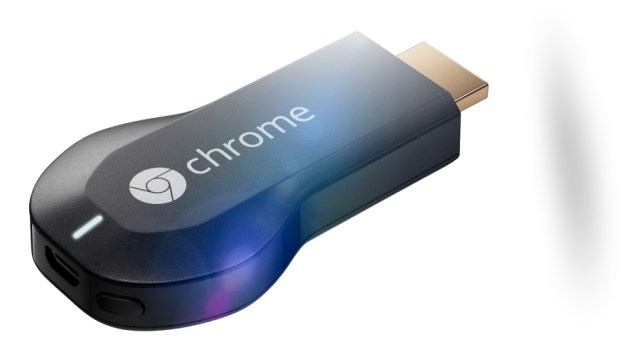 The next big thing isn’t big at all. It’s the size of a USB flash drive, fits into an HDMI port on your TV, and turns that TV into a screen for your phone, tablet, or computer. And it costs an affordable $35. All hail the Chromecast, announced today at an event in San Francisco.

At a breakfast event with Google vice-president Sundar Pichai yesterday, Google revealed the Chromecast, which makes your TV a screen for playing online video and transforms your computing device of choice into the remote. Pichai told Forbes in an interview that in spite of the existence of HDMI cables, Smart TVs, and set-top boxes, only 15% of people know how to view online content on their TVs, and Google wants to solve that problem by making the process simple, easy, and wireless. All you have to do is plug what looks like a flash drive into your TV’s HDMI port and change the TV’s input, and you can watch YouTube videos on your TV in 1080p as nature intended.

The Chromecast works with iOS, Android, Windows 8, and Mac OSX, though poor Windows Phones seem to have been left out in the cold. It works by connecting to your devices on Wi-Fi, so it sounds like you’ll need to have a local Wi-Fi network in place for it to work, but come on — you’d need that for watching YouTube videos in the first place. From there, all you need to do is press the ‘Cast’ button that appears if the Chromecast is activated and the video pops up on the TV. It’s just like in this commercial, except probably less fun because of how your life is not a commercial.

Google promised that “Unlike other solutions, we will not force you to have the same operating system on all your devices.” You also won’t be forced to stay on the same screen while using it; you can keep playing a video while surfing the rest of YouTube or going through Netflix’s catalog, while using the device as a remote to control the volume or pause the video. If you’re using it on a computer through the Chrome browser, you can browse as usual outside the tab while the video keeps running on your TV.

The consensus sees to be that Chromecast is poised to be much more successful than the existing Google TV, and given that I have barely any idea what Google TV can do and am already pretty excited for this thing, I’m inclined to agree. It’s up for pre-order on the Google Play Store, though inventory may have already run out, and it will become available at Best Buy soon. For a limited time, they’re even bundling three free months of Netflix with it. Again, thirty-five dollars. Your call.

(via Forbes and The Verge)