Google’s Olympics Doodle Might Remind You of a Very Frustrating Game, but There’s a Reason for That

Today marks the beginning of the 2012 London Olympics, and naturally the Internet giant Google honored the event with its very own Google Doodle, as is par for the course for just about any day that is slightly noteworthy. The Doodle is cute, using cartoon characters to represent the usual colors of the Google letters, while they’re holding most of the letters outright instead of contorting their bodies to mimic the shape of them. However, depending on how embedded you are in Internet or obscure video game culture, you may feel like there’s an Easter egg in the Doodle.

The character in the red resting on one knee might remind you of QWOP, universally recognized as one of the most difficult games ever made. QWOP is a free, simple game in which the player controls the titular Qwop, and has to complete a 100 meter run that contains one hurdle along the way. As anyone who has played the game is aware, it is nearly impossible to control, which is what makes it so comically difficult. The player must use the q, w, o, and p keys to move Qwop’s legs to make progress down the track. Sounds simple, but you’ll most likely immediately fall over a countless number of times as the game begins. QWOP is so ridiculously difficult that it’s actually viewed as fun and humorous instead of frustrating, especially due to the character’s silly animations as his body wildly bends before he collapses to the ground. There’s even QWOP cosplay:

So, did Google honor the infamous QWOP with their Olympics Doodle? Unfortunately, no. The creator of QWOP has stated on more than one occasion that he simply designed the character after ten time Olympic medal winner Carl Lewis. A quick Google Image search will leave no question about the creator’s claim, in case you were feeling or hoping that he was just making some kind of joke: 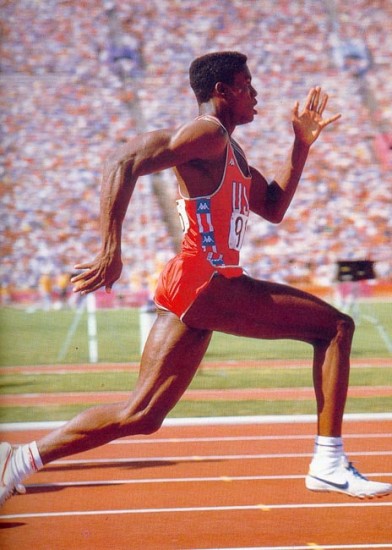 Look familiar? So, no, Google most likely didn’t design their 2012 London Olympics Doodle after everyone’s favorite game featuring one hurdle halfway up the track, but you can at least trick some of your friends who aren’t aware that Qwop was modeled after Carl Lewis.